Recession Outlook: The Role of Government

The U.S. economy is going to take a "breather" in the next year. However, if government decides to panic over rapidly rising deficits, that breather could turn into a deep recession. And then, all bets are off.


In the first two installments of this series I explained how consumer spending, personal income and business investments suggest the economy is heading for a shallow slowdown. Lik the Millennium recession, it would essentially be a "breather" before picking up steam again.

There is, however, a caveat in that outlook, and it is a big one: government.

With only a couple of missteps, our politicians could easily turn a mild recession into a serious one. To see why, let us first go back to the point I made in the first part of Full Size Government, where I explained:

In Q2 2019, the annual amount spent by federal, state and local governments amounted to almost $7.6 trillion, while total revenue stopped at $6.8 trillion. (These numbers add together spending in each one of the past four quarters, thus giving us an annual number.) Of the $747.1 billion deficit, 70 percent is federal, leaving $225 billion in total deficit among the states and their local governments.

This means that government spends about 37 percent of our GDP, with their tax collections trailing just behind. This is bad, of course, but from a policy viewpoint it gets even worse when we add the elephant-size deficit. It is here, namely, that the biggest risk lies when it comes to a recession.

The Trump economy is doing well, especially by international comparison, but his government is also borrowing profusely, with projections of trillion-dollar deficits as far as the eye can see. Things don't look much better at the state level, with at least 40 states running budget deficits.

It is well known that deficits cannot last forever without causing major problems. We are already paying the price for our half-century long record of almost uninterrupted federal budget deficits, with overspending and subpar growth rates. In an economy this strong, we should be growing at four percent but can barely break the three-percent barrier.

Modest growth is not just a technical problem for national accounts nerds. It has direct consequences for people's ability to earn a good paycheck, for their opportunities to advance their careers and for their savings and investments for the future. On the policy side of things, this means slow growth in tax revenue - and widening budget gaps.

When an economy slows down from the peak of a business cycle, and its growth rate was moderate to begin with, things can turn bad pretty quickly. A deficit at the height of a growth period means that there is no "cushion" in fiscal policy before a deficit becomes a major burden on government finances:

The combined effect of rising deficits at both the state and the federal level is a major cause for concern. For reasons I have discussed at length in other articles, a central bank cannot go on forever monetizing government deficits. Inevitably, Congress will be forced to take fiscal action. On top of that, they will also be asked to help the worst-hit states with bailout money; that was what Obama's American Recovery and Reinvestment Act was really all about. Next time, it will likely be done in the open.

How likely is this scenario? Let us have a look at three relevant variables, namely GDP growth, growth in government spending and growth in tax revenue. Figure 1 puts them together, displaying how the two latter variables correlate with the former: 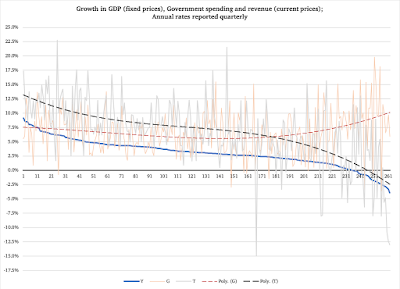 What this technical analysis tells us is, plainly, that the more slowly the economy grows, the wider the gap in government budgets will get. This is economic dynamite: by definition, GDP growth weakens in a recession; the weaker it gets, the faster the budget deficit grows (see the distance between the dashed lines).

In an economy that barely churns out three-percent growth when it is at its strongest, the drop into a recession is fairly abrupt. All other things equal, this is not a major problem; what is a major problem is that all other things are not equal. Governments, local, state and federal, will quickly reach a point where their deficits turn unsustainable.

Bluntly: the margin - political padding - between the point where their deficits are tolerable and where they are intolerable, is thinner now than it was 20 years ago (the last time our economy saw four-percent growth). This elevates the risk for drastic reactions from legislators, primarily at the state level. As an example of what this would mean, consider the Taxmageddon threat in Wyoming, where legislators want to raise almost every tax in sight to conceal a structural over-spending problem. The Cowboy State's legislative leadership may be leading the tax-hiking efforts in the country, but once we dive into a recession they may find themselves to have some stiff competition from other states for the tax-to-the-max trophy.

On top of that, if Congress decides that it can no longer rely on the Federal Reserve to monetize its deficits, they could rapidly add insult to the injury that the economy will sustain from state-driven tax hikes.

Herein lies the real problem with a recession. As I explained in my two-part series on a Greek fiscal disaster in America, there are good ways to downsize government - and there are some bad ways to do it. Bad downsizing, which means trying to save government at the expense of the private sector, will quickly turn a manageable recession into a macroeconomic crisis.

Right now, there is no bigger risk factor in the U.S. economy than this. If Congress and our state legislatures decided to reduce spending - structurally and permanently - they could avoid pouring gasoline on a recession fire. Short of such policies, though, this risk factor remains in place.
at October 11, 2019