Consumer spending suggests the economy is not in too much trouble. But we also have to keep in mind how closely consumer outlays are related to personal income, which in turn is closely tied to GDP.


Over the past year predictions of a recession have come trickling through the media news cycles. Democrats want a recession because they think that is the only way they can win next year; those of us who dwell on the right side of sanity are worried about a recession because it would send people into unemployment and cause major fiscal problems for our oversized government.

Not all recessions are to be feared. If the economy just takes a breather, there is nothing to worry about. If it goes into a nosedive, however, anything can happen.

The biggest worry - bigger than the presidential election - is a debt crisis. I have written extensively about that threat, so there is no reason to repeat those points here (though check out the links at the end of this article for more details). Suffice it to say that a debt crisis would rip into the prosperity of this country like no other economic event before it; in terms of social destruction it would rival the Great Depression, but in terms of political fallout it would be worse.

The risk for a debt crisis is closely tied to the risk for a recession. In this article, and two follow-ups, I will look at whether or not we actually have a recession coming.

Normally, when economists want to make forecasts they load sophisticated models with giant sets of data, then turn the cranks and churn out a range of predictions. I don't do that; model-based forecasting in economics is only marginally better than the disastrously error-stained practice of predicting global warming. No, there is a much better approach, and that is to simply combine good macroeconomic theory with examination of trends and policy. Call it "retroactive forecasting" if you will. 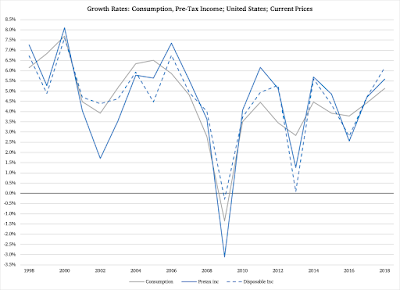 As the grey function in Figure 1 shows, consumer spending is more stable than personal income, but it also follows closely the variations in income. As we can see, in 2017 and 2018 we saw increasing improvements in total personal income earned by American families, and a result we saw consumer spending grow at better rates than we have seen in 15 years.

Before we move on, a note on why the use of current-price data. Normally we would look at inflation-adjusted numbers, but they are not very useful for any analysis of government finances. We pay taxes in the nominal world, where inflation exists, and therefore we need to stay in that world if we want our forecast to lead into anything useful for a discussion of government budgets.

Figure 1, again, tells us that we are in a period of solid economic growth. The history over the past 20 years tells us that this kind of peak doesn't last all that long, but it also suggests that when we reach the top - as we probably do this year - there is no apparent reason to expect that it will be followed by a sharp downturn. We came off a peak in 1998, after which we saw another strong one before the short and relatively mild Millennium Recession. We also saw a "breather" on the heels of the first peak of the Great Recession recovery.

This, again, does not mean we won't see a deep recession. There is a distinct reason to fear one, a reason we will return to later. But as far as consumer sentiment goes, there is not much to worry about. Figure 2 reinforces this point, even giving us reasons to believe that we have more growth to expect. As a lead-up to explaining the circles, note the interaction between the solid and dashed lines: 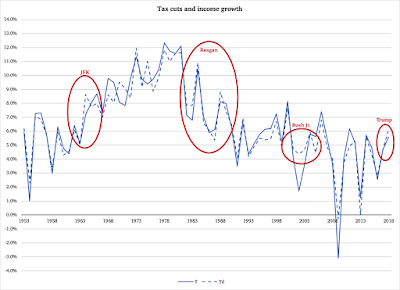 Mainstream macroeconomic theory suggests that the moderating effect of taxes is actually good for the economy; there is a strain of literature that talks about "the Great Moderation" in the American economy as some sort of good phenomenon. A later article will look at this in a forecasting context and explain that this is actually not the case. For now, though, let us focus on the red rings, which refer to episodes where the normal pattern of pre-tax and disposable income growth has been broken.

There are four such episodes, all of which relate to cuts in federal personal income taxes: Kennedy, Reagan, Bush Jr. and Trump. Every time such cuts have been made, disposable income has risen faster than pre-tax income. As Figure 1 showed, in the Bush and Trump cases there is a clear effect on private consumption:

There was a similar effect after the Kennedy tax cuts and weaker but identifiable spikes in the Reagan years. That would tell us we can look forward to a couple of more years with good growth in consumer spending, but it also tells us that the effect is not longer than that.

One problem with the Trump tax reform is that it reinforced the marginal effect in the federal tax code. It did wonders for lower-income earners, especially in states with low or no income taxes, but it did not do much for higher-earning households. Combined with the discouraging effect of welfare programs - where benefits taper off quickly as income rises - federal personal income taxes make sure a reform of the Trump kind create a positive but relatively short-lived effect on the economy. When people's incomes rise they notice quickly how they get punished for earning more money.

Provided that tax cuts stretch across the entire income spectrum, there is a lot of good to be gained from letting people keep more of their own money. Figure 3 reports data from all the 50 states plus the D.C., over a period of 20 years, on the correlation between consumer spending and personal income. The data is ordered after size in annual growth, with personal income as the lead variable. The observations farthest to the left report the strongest gains in personal income; the observations farthest to the right report the weakest growth rates (declines, actually): 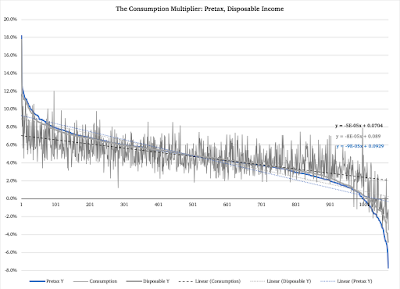 The blue equation represents the linear trend in pre-tax income; the grey equation is for the trend in disposable income. The black equation, lastly, reports the linear trend in private consumption. While the equations themselves may not be of interest beyond further technical analysis, the broader point is unmistakable: it takes more than a one-percent increase in income to stimulate a one-percent increase in private consumption. This helps us predict consumer spending for the next year or two, an endeavor we will return to in a later article.

The meaning of this becomes profound when we go back to Figure 2. There, we saw strong spikes in consumer spending whenever we cut taxes; if we reduce the tax wedge between total and disposable income, we get more such spikes over time. This leads to stronger growth and a more resilient economy.

Laffer was right, of course.

In summary, if we take consumer spending and personal income in isolation we have no immediate reasons to worry about a deep recession. Since consumer spending is crucial to the economy, this is good news for both Trump and for America. However, we also need to take into account what is happening to capital formation (business investments). Then - and here is where it gets tricky - we need to look at government finances and what legislators around the country could be up to. Nothing destroys a good economy like politicians panicking over their government budgets.
at October 07, 2019