Based on an analysis of current business-investment trends, we can conclude that the economy is on its way into a mild recession - a breather. But there is one factor that could make things much worse.

if we take consumer spending and personal income in isolation we have no immediate reasons to worry about a deep recession. Since consumer spending is crucial to the economy, this is good news for both Trump and for America. However, we also need to take into account what is happening to capital formation (business investments).

That is the topic of this the second Recession Outlook article. American businesses spend more than $3.6 trillion per year on investments, breaking down into the following categories:
The share of GDP going to business investments in the U.S. economy is not among the highest in the industrialized world, but it is normal and, most importantly, steady over time.

Swings in investments are highly indicative of the business cycle. I have raised caution about the U.S. economy before based on observations of the trends in business investments simply because they tend to change up to a year ahead of the business cycle itself. At first glance, I would do the same now: as Figure 1 reports (in current prices), we seem to be on the far side of an investment peak. Investments in both residential structures (homes) and nonresidential structures (manufacturing facilities, offices, warehouses, etc.) have gone negative. However, the increase is tapering off in the other major categories as well: 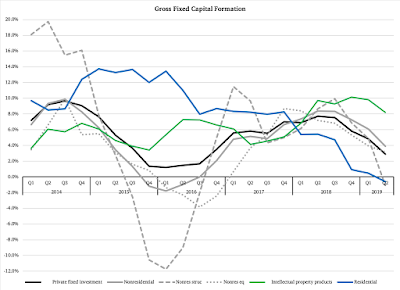 However, this superficial conclusion would ignore the levels at which investments are still increasing. In the second quarter of 2019, the latest for which the BEA publishes data, total gross fixed capital formation was up 2.9 percent on an annual basis. This is down from 4.8 percent in Q1 and the lowest annual growth rate in any quarter since Q3 of 2016, but it is still a reasonably good number.

Non-residential investments, which account for the bulk of capital formation in the U.S. economy, increased by 3.9 percent in Q2, down from 6.1 percent in Q1 and the lowest since Q4 of 2016.

Breaking down this number by industrial sector, however, is quite revealing. In commerce and health care, capital formation declined by a small two percent; the decline was higher in power and communication (-3.1) and mining exploration (-6.2). However, manufacturing showed real strength: investments in structures for manufacturing purposes increased by 10.1 percent on an annual basis.

In actual numbers, manufacturing investments are comparatively small at $68.5 billion in Q2 of this year. However, investments in manufacturing facilities are not only growing, but the growth rate is accelerating: in Q3 2018 the increase was 2.2 percent on an annual basis; in Q4 2018 it was 3.9 percent; it rose to 9.9 percent in Q1 of this year and is, again, at 10.1 percent for Q2.

However, even if we take into account the strong showing in manufacturing, does not the decline in the investment in non-residential structures indicate that we are heading for a recession?

No, but the economy is going to take a breather, much like it did in 2016.

Structures account for 22 percent of total non-residential investments. The other 78 percent consist of equipment purchases, and there we saw a 3.2-percent annual rise in the second quarter. Even better: equipment investments increase across all categories:

This last category is defined by the BEA as 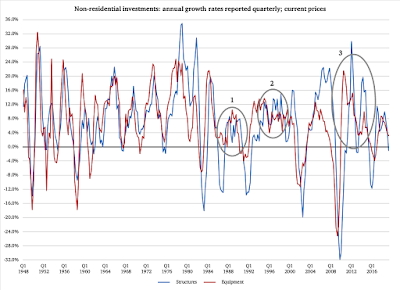 The first period marked, the 1980s, saw a peak in equipment investment about a year before the peak in structural investments. However, once the latter declined, the former picked up again, precipitating a swift recovery from the early '90s recession.

The second period, the strong Clinton growth period, saw sustained growth rates in both structures and equipment. Again, equipment investments tapered off before structural investments did, and the turnaround in the Millennium "recession" - really just a breather - was again marked by a rise in equipment purchases.

Before we get to the third period, let us note that in both these two periods the trough of the recession was marked by the growth rate in equipment investments being higher than the growth rate for structures. This is not to be taken as a universal law, but it suggests that businesses have reached a point where they have idled enough capacity to want to pick up activity again.

The third period includes the Great Recession and the tepid recovery from it. Here, there were violent swings in spending on non-residential structures. We do, however, see the same pattern in terms of timing: there is a peak in equipment investments, followed by two peaks in structural investments. Then the economy takes a breather (2016) after which there is more moderation in both numbers.

Drawing on the experience from all three periods I suggest we are heading for a "breather", not a real recession.

This conclusion is based on:

a) what the previous article said about consumer spending,
b) what we have observed here regarding the interaction between equipment and structural investments, and
c) the fact that we have no obvious build-up of excess capacity.

The last point is important. Consider the period 2004-2008, right before the Great Recession. Equipment investments taper off already in 2006 while the build-up of structural capacity continues with notable ferocity, topping 20 percent increases, until it plunges deeply and rapidly in 2009.

A similar build-up of excess capacity can be seen right at the end of the 1970s, in part precipitating the recession that marked the end of the Carter administration. No such pattern is visible now, suggesting - again - that while the economy is slowing down, it is not heading for anything closely comparable to the Great Recession.

A much more likely outlook is a Millennium "breather". In addition to the above mentioned factors, we also have to consider - again - that there is real strength in manufacturing.

There is, however, one caveat: fiscal policy. If the economy is left alone it will manage its ups and downs well, but it is very likely that government will not leave the economy alone.

Part three of this Recession Outlook will take a look at what fiscal policy could do to upset what is shaping up to be a business-cycle moderation.
at October 09, 2019