From Recession to Crisis: The Theory

Never under-estimate the ability of government to turn a recession into a full-blown economic crisis. Here is how it happens.


In my three-part Recession Outlook series I concluded that the worst we are looking at is an economic breather, namely a short and shallow recession that essentially allows the economy to catch its breath. However, I also cautioned that this outlook is conditioned on the premise that government does not do anything irrational.

As we all know, that is a big, fat "if" to hinge your economic future on. I explained:

the more slowly the economy grows, the wider the gap in government budgets will get. This is economic dynamite: by definition, GDP growth weakens in a recession; the weaker it gets, the faster the budget deficit grows (see the distance between the dashed lines). In an economy that barely churns out three-percent growth when it is at its strongest, the drop into a recession is fairly abrupt. All other things equal, this is not a major problem; what is a major problem is that all other things are not equal. Governments, local, state and federal, will quickly reach a point where their deficits turn unsustainable.

Raising taxes in the early onslaught of a recession is like pouring that infamous gasoline on a fire. Spending cuts are always less harmful; done right, they can even be beneficial for the economy over time. The problem is that not all politicians realize this: from Democrats in Congress to likeminded Republicans in some state legislatures (no particular state mentioned) the mindset seems to be that higher taxes is the only way forward - especially on the doorstep of a recession.

In short: the U.S. economy is in grave danger if our politicians unite around an agenda that demands higher taxes right now.

There is a plethora of research showing that tax hikes hurt the economy. What has gained much less attention is the series of events through which government escalates a mild recession - a breather - to a deep recession, even a depression. It is not surprising that this particular issue has attracted scant attention: it is not a topic suitable for econometricians like the ones filling the economics departments at our colleges. It is also not a topic for political scientists who almost invariably lack proper understanding of economics.

Fortunately, the 200-year-old tradition of political economy is still alive. The problem at hand is perfectly suitable for this good, old discipline: it blends economic problems with policy making.

In this article I will lay out the theoretical aspect of the question of how improper fiscal-policy decision making escalates a recession to a crisis. There are three premises for our reasoning:

1. The primary policy goal is to reduce the budget deficit, i.e., to implement austerity. Policy makers do not believe that such austerity measures, on the balance, will have negative effects on the economy.
2. Austerity is short-sighted. This means that the measurement of success is the expected outcome of the federal budget one fiscal year into the future. As a result, policy makers will decide on the measures that give them the highest rate of return in the shortest period of time, with "return" being defined as a reduction of the budget deficit.
3. There is no monetization of the budget deficit, in other words no Quantitative Easing is available.

Experience from austerity episodes, primarily around Europe, suggest that when politicians react to signals of a growing deficit, they react swiftly and decisively. There is no reason to expect otherwise in the United States; on the contrary, if state legislators are any indication it is likely that we will see the same commitment to austerity here as well. The nightmarish scenario, of course, is when 101 legislatures, from all the state capitals to U.S. Congress, march in the same austerity direction.

That is the point when policy makers will make a recession explode into an unmitigated macroeconomic disaster. As we will see in a later article, even if we relaxed the third premise above and allowed for QE, it would not help.

To get an idea of how governments cause an escalation from recession to crisis, consider Figures 1 and 2. First, Figure 1 presents the basics of a recession: the blue line shows GDP growth declining, while the red dotted line depicts the budget balance. The black dotted line represents the point where the budget shifts from surplus to deficit: 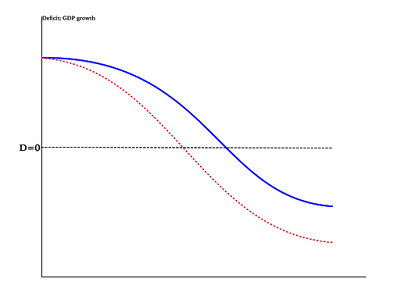 The budget balance usually swings more vividly than the economy as a whole, one reason being the counter-cyclical trends in government spending and tax revenue. Therefore, when the economy begins its descent into a recession, the path from budget surplus to budget deficit is shorter than it would be if the budget followed the business cycle. (This is the case in an economy without a welfare state.) For this very reason, once the signs of a recession emerge the window for fiscal policy measures is relatively narrow.

Technically (with time measured on the horizontal axis): 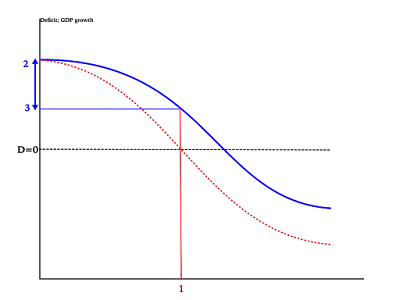 When the first signs of a recession emerge, the economy is growing at a given annual rate (point 2). In terms of time, this is "zero", or the origin in Figure 2. As the economy slows down, the government budget swings from surplus to deficit (point 1), which happens when the economy is in its descent into a recession but still grows at a positive rate (point 3).

The window for decision making regarding the deficit is the distance in time from the origin to point 1. The decline in growth that will happen during this time is represented by the distance between points 2 and 3. For example,

If we assume that our legislators are prudent, rational and foresightly in their policy making (yes, I know...) then the longer the period from the origin to point 1 in Figure 2, the more reasonable their policy making will be. By the same token, the shorter the decision window, the less time they will have to find the best solution to the problem.

This is not rocket science. It is just common sense. The problem is that our politicians do not realize that they are actually trapped in this decision lock-box. Rather than taking prudent action ahead of time, they tend to be reactive and wait as long as possible - sometimes longer - with any critical policy action. In the context of austerity policy, this has rather serious consequences. As the first two premises of our reasoning stipulated, politicians are short-sighted and want the biggest upfront return possible on their austerity measures; the faster the budget is descending into deficits, the bigger the return they need.

At the same time, the narrower the window for their decision making, the less time they have to find the best policies. As the window narrows, focus is increasingly on that upfront return.

In the case where tax hikes are at the top of the agenda, this has disastrous consequences. Greece suffered enormously because of this mechanism; other factors played in, such as catastrophically bad advice from IMF economists, but the foundation for the Greek disaster was laid when politicians maximized the wrong policy turnout in the shortest possible period of time.

There are many more questions to answer here, such as how this model for fiscal-policy decisions works in an economy that is already running a deficit. More on that in the next part, where we look at some numbers for the U.S. economy - and what a crisis could look like here, once our policy makers trap themselves in that shrinking decision window.
at October 18, 2019