From Recession to Crisis: Spending Cuts

There are good spending cuts, and bad spending cuts. The good cuts reduce government and yield back economic "territory" to the private sector. The bad ones do the exact opposite. Wait - spending cuts that grow government? Yes, it is actually possible.


As we continue looking at how an economy goes From Recession to Crisis, a look at Europe helps us understand what exactly happens when politicians reach the fiscal-panic point. The European experience comes in two parts: spending cuts and tax hikes. This article takes a look at examples of cuts in social expenditures, i.e., benefits provided through the welfare state.

To begin with, let us get an overview of the European welfare state. At the EU level, which in these numbers include all 28 countries, total spending on entitlements in 2016 - the latest year with comprehensive data - amounted to 4.2 trillion euros, or 28 percent of total European Union GDP. This number is not directly comparable to any U.S. number; the entitlement systems are defined differently in the Eurostat numbers than in American statistics. This is worth keeping in mind as we go into more detail; a later article will calibrate the two systems. Overall, though, government is notably larger in Europe than in the United States.

While the EU-level statistics reflect the composition of the European welfare state, it is not funded or administered, not even legislated, at the EU level. Unlike the impression one can get as an outside observer, Europe still does not have a full-scale EU government. For two reasons, its current construct does not automatically permit the equivalent of the U.S. government. First, the structure is not democratic: the European Parliament only has limited legislative abilities while the executive branch, the European Commission, has both executive and some legislative powers. The Commission is not elected, but appointed, as is the third governing body, the Council of Ministers representing the member states.

The EU was not built as a welfare state, but as a regulatory body that would "harmonize" regulations and legislation across member-state borders. However, it is increasingly seeking to get itself involved in the welfare state, a fact that is cause for emerging tensions between Brussels and the member states.

The second reason why the EU is not to be compared to the U.S. government is that it does not have the taxation or borrowing powers that Uncle Sam has. It does have its own central bank, but there is no treasury-bond instrument allowing the EU to borrow money and build debt. One reason is, again, that it does not have independent taxation authority; there are EU taxes, but they are enforced entirely by the member states.

It is no secret that the EU is pursuing its own taxation powers, and one reason is precisely that it wants to get itself involved in welfare-state entitlement spending.

With that in mind, let us get back to the numbers over the European welfare state. As mentioned, spending on so-called social protection consumes 28 percent of the combined EU economy. These outlays are distributed as follows:


The second item, health care, is a source of much debate here in America. It is often said that the European systems are much more efficient than ours, and the only piece of evidence presented is its share of GDP. It is true that the 28 percent of social expenditures that go toward health care amount to eight percent of GDP in the EU, but it is not true that this is a sign of drastically higher efficiency. Any such argument is based on a statistical mirage: the European single-payer systems make up for the lower cost with heavy rationing.

Two of the best examples from Europe are Greece and Spain. Figure 1 reports health-care spending per capita in these two countries: 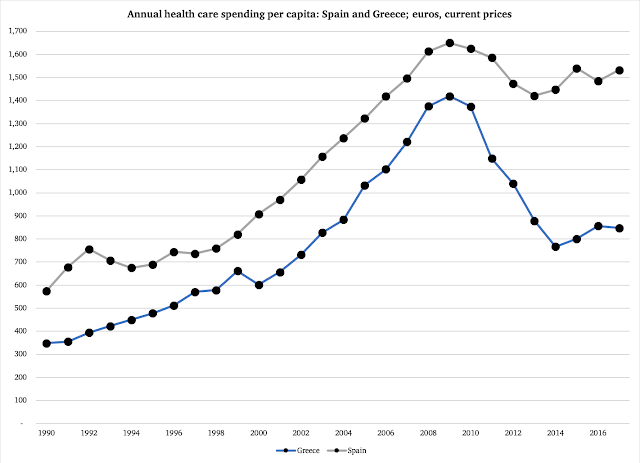 Up until the Great Recession (which was at full hurricane force in 2009) health-care spending increased generously in both Greece and Spain. Eurostat reports spending data for nine years from the start of the recession; during that period, the Greek health care system reduced its spending per capita by 4.9 percent.

In 2017 every Greek got only 62 cents worth of health care for every euro he got in 2008. This, of course, is a tragic default on a major welfare-state promise to its people, but it gets even worse if we add to this the normal evolution of health-care technology. Over the past 60 years - the period for which we have reliable data - improvements in treatment, technology and the skills of medical staff have increased the cost of health care by 5-7 percent per year, in current prices. 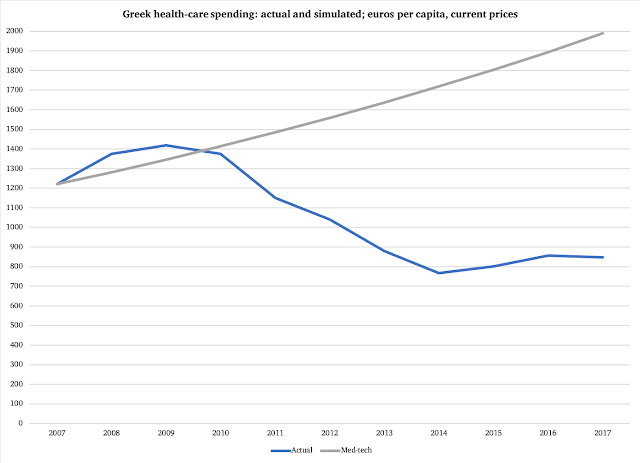 Under the realistic assumption that per-capita spending must increase by five percent per year to keep up with medical technology, over the past ten years the Greek people have been deprived of more than half of the health care that government has promised to deliver. Even if we assume that the single-payer system is able to keep the growth rate below five percent (through bulk purchases of the cheapest available technology), the growth rate still remains positive.

The figures for Spain are not quite as drastic, with an annual decline in per-capita spending of 0.5 percent. Over the nine years since the start of the Great Recession the Spanish people have been deprived of five percent of the health care spending they got back then, still missing out on nine years' worth of advancement in medical technology.

Other European countries have had similar, protracted episodes of austerity. In Sweden, per-capita health care spending stood still from 2002 to 2009, then almost grinding to a halt again 2013-2017.

From 2009 through 2014, the first five years of the Great Recession and its aftermath, a total of 13 EU member states - almost half the member states - increased their per-capital health spending by less than ten percent. For the entire period.

Denmark saw an increase of nine percent in total, with Lithuania just behind with eight percent. Marginal increases took place in the Czech Republic with three percent and Slovenia with two percent.

In Croatia and Latvia the same increase was only one percent.

In seven countries pending was lower in 2014 than in 2008 - the last year before the full force of the recession broke out: Cyprus, Greece, Hungary, Ireland, Italy, Portugal and Spain.

Again, these cuts happened over the course of a recession, from the pre-recession peak. This is a period when per-capita spending should have gone up due to a growing share of the population falling into poverty. Instead, ten countries hurt badly by the economic downturn cut their benefits.

Denmark kept their benefits steady, again in current prices, meaning that the benefits were de facto hollowed out by inflation.

Amazingly, five countries even managed to cut their unemployment benefits in the midst of this the toughest recession since the Great Depression.

These examples of spending cuts illustrate what happens when politicians respond to a recession with something that can best be described as fiscal panic. We could see a lot of this in the United States when we hit the next recession - and when these spending cuts go into effect, paired with tax hikes (which we will look at next), they do quite a bit of harm to an already struggling economy.

There is only one safe way to protect America against fiscal panic, and that is to sustainably, structurally and permanently reduce the size of government. That, in turn, can only be done if we fundamentally rethink the welfare state.

Next up is a look at what the Europeans did on the tax side during the Great Recession.
at October 21, 2019