The Federal Reserve is pumping more liquidity into our banks not because of some conspiracy, but to save the economy from a looming recession. I know, it's dull, but that is really why they are doing it.


There have been a lot of comments around the internet over the Federal Reserve's decisions to cut interest rates. For example, a week ago CNBC reported:

Wall Street is getting worried that the Federal Reserve's aggressive efforts to control short-term borrowing rates have run into some potholes, with more danger ahead. The central bank has been working feverishly to address issues that popped up more than a month ago in the repo market ... A cash crunch led to a spike in several rates, leading the Fed to institute programs to maintain proper liquidity levels. While the effort has worked fairly well so far - rates rose last week, though not nearly as much as in mid-September - finance professionals fear that the market problems are not fixed and funding issues can happen again.

These short-term liquidity problems have been blamed on Dodd-Frank, a point underscored by the Federal Reserve's recent decision to ease some bank liquidity requirements imposed by the law. However, there is a broader picture at work here, one that is not often mentioned in the media. It has to do with the growth effects of the Trump tax reform.

When Congress passed Trump's tax cuts, many commentators predicted high growth rates, with some even touting quarter-to-quarter growth data as sign of tax-cut success. Based on Keynesian economics, I have said all along that the Trump tax cuts were good and necessary, but they would not bring us back to the healthy growth rates of the Clinton economy.

Macroeconomic data has proven me right over and over again. Now the supply-side oriented tax cuts - which again I applaud - are predictably running out of steam.

What, then, do we do about an economy tip-toeing toward a recession? The fiscal-policy arsenal has been emptied out: a massive, gaping budget deficit at the height of a growth cycle effectively preempts both tax cuts and increases in spending (which, for the sake of clarity, I would never recommend at any time).

The only path left is monetary policy. There are two instruments that the Federal Reserve can use: liquidity increases and interest-rate cuts. These are technically related but can be used somewhat differently to help boost GDP growth.

A general effort by the Fed to cut interest rates will have a broad effect across the economy. However, it is a bit of a blunt instrument. On the one hand, it allows both government spending to increase (as its borrowing costs decline) and the private sector to expand consumption and investments. On the other hand, it takes a while for the rate cut to trickle down to the bank branches and mortgage lender offices where consumers get their loan applications approved. Since a general rate cut consists of a shift in the Fed's portfolio from money to Treasury bonds, the effect can be lost in translation.

Another angle to this is the large deficit that the government already has. By lowering the borrowing costs for the U.S. Treasury, the Federal Reserve runs the risk of an interest-rate cut being absorbed by government before it reaches consumers. This may prevent, or at least delay, tax hikes in response to increasingly unsustainable deficits, but it also means that we as a country depend increasingly on the government continuing its deficit spending for our economy to grow.

The Fed is therefore wise to use its liquidity instrument for a more precise injection of stimulus into the economy. Its efforts to untangle the liquidity restrictions imposed by Dodd-Frank is a good example of this, and it is likely to have more direct effects on consumer finances than general measures to cut interest rates.

A look at consumer credit data from the Fed confirms that the central bank has reason to worry - and to think its current measures can make a difference for the better. The restrictions on liquidity that the Fed relaxed earlier this month contributed to higher interest rates for consumers; it is not the case that all increases in consumer-loan interest rates are attributable to Dodd-Frank, but the now-relaxed restrictions forced banks to increase rates earlier and more broadly than would otherwise have been the case.

In a growing economy, demand for credit increases and therefore tightens bank liquidity. By infusing cash into the immediate overnight lending market, the Federal Reserve eased the liquidity situation, but only on the margin. Its Dodd-Frank reforms broadened their help, and for good reasons, as Figure 1 reports. Interest rates on consumer credit are on the rise, and given the strong economy this is unlikely to be caused by an overall decline in consumer credit ratings: 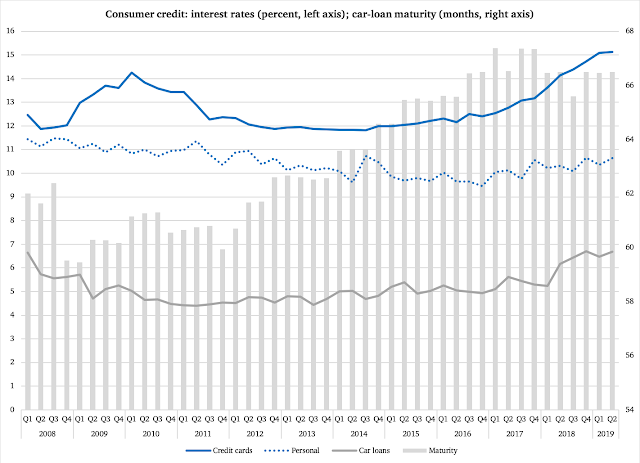 The extension of car-loan maturity is related to more than banks operating under stricter liquidity requirements, but there is an interesting aspect to them. The average amount financed on a car loan has increased by 32 percent in ten years. This is not much - compounded it is not even three percent per year, which means that under normal circumstances banks should be able to lend without stretching out the terms of the loans.

However, the fact that the length of the average loan has increased by ten percent suggests that banks have to be more risk averse: by lowering the monthly cost of a loan - the practical effect of longer terms - they can continue to grow lending at a reasonable rate but lower the risk of defaults. By lowering default risk they ease their exposure to tight liquidity situations.

The rising interest rates are not a source of imminent worry; another series of data from the Federal Reserve on consumer debt service shows a decline after the Great Recession:

However, the fact that debt ratios are steady is no guarantee for them to remain there. The rising interest rates on consumer credit are a sign of worry; if this brings the DSR back up again it would set us on a path back to the 2008-09 situation. Back then, the DSR had been above 12 for a sustained period of time, meaning that all other things equal, consumers have margins in their finances for higher debt costs. But since all other things are not equal, it is reasonable of the Federal Reserve to intervene and try to preempt a household debt shock.

In fact, if we break down the DSR into its two components, mortgages and other consumer credit, we notice that the slow, marginal decline in overall DSR is entirely due to a decline in mortgage costs. On the consumer-credit side, the debt ratio is actually crawling upward. This trend, consistent with the rising interest rates reported in Figure 1, suggests that an uptick in interest rates would relatively quickly affect the bottom lines of consumers.

By easing liquidity regulations the Federal Reserve gives banks more margins in their risk exposure. This should stop or at least delay the rise in interest rates on consumer credit.

In theory, this should keep consumer spending afloat and contribute to a further stretch-out of the current growth period. We will also likely see just that happening, though keep a close eye on the Federal Reserve's reporting of household debt data.
at October 25, 2019