Since 2016, only two states have raised their corporate income taxes. If the legislative leadership in Wyoming get what they want, they will add their state to the list. As we know, tax cuts work wonders for tax revenue; what the Cowboy State lawmakers need to understand is that tax hikes also work - in the exact opposite direction...


One of the most well-established truths in economics is that tax cuts work. Wherever tried, they boost growth, stimulate entrepreneurship, encourage risk-taking and expand opportunities for people to develop their careers. The criticism often heard against tax cuts is that they lead to budget deficits, but that is not the fault of the tax cuts.

Deficits are the work of excessive spending.

President Trump led the fight to reduce the federal corporate income-tax rate, and he did so successfully. After an initial decline the federal government has seen a steady rise in tax revenue. States are generally having the same experience: in the second quarter of this year states totally collected 15 percent more in tax revenue than they did the same quarter three years ago. This may not seem like a spectacular increase, but given the fact that our GDP is growing at less than three percent per year it is actually a respectable number.

In fact, in 2013 to 2016, the strongest part of the Obama recovery from the Great Recession, state tax revenue grew by less than 12 percent.

The most interesting part of this is where the tax revenue collections come from. In the earlier period sales-tax revenue drove the increase, with a 15-percent rise. Revenue from property and personal-income taxes rose just over 11 percent, while corporate income-tax revenue fluctuated significantly but stood still for the entirety of the period.

In the latter period, revenue from taxes on corporate income surged into the lead, growing by a healthy 25.6 percent from Q2 2016 to Q2 2019.

Well, states did not raise corporate taxes to get there. More on that in a moment; first, let us have a look at the trends in income, property and sales taxes over the past four years, all courtesy of the Census Bureau: 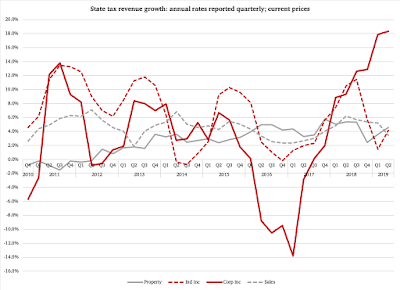 Since 2015, the unweighted average tax rate for the 50 states has declined from 6.33 percent to 6.2 percent. This may not seem like much, but it does make a difference for businesses in two ways:

Bluntly, a state that cuts its corporate income tax, if ever so slightly, signals that "you can trust us - we are not going in the wrong direction."

Two states raised their taxes during this period: Illinois in 2018 and New Jersey in 2019. Revenue numbers from Illinois suggest they saw a 10.1-percent decline in corporate tax revenue the year they raised their tax. It was a substantial increase, from 7.75 percent to 9.5 percent, so it should come as no surprise that they lost over $290 million in revenue the year the tax hike went into effect.

By comparison, in 2018, the year after New Hampshire cut its tax rate from 8.5 percent to 8.2 percent, corporate-tax revenue increased by almost 38 percent.

The critical reader may note that the comparison between Illinois and New Hampshire does not use the same periodicity: in Illinois the impact is illustrated with same-year revenue changes while there is a one-year lag in the New Hampshire numbers. There is a good reason for this difference: businesses respond more quickly to tax hikes than tax cuts.

Both tax changes are announced in advance, but since a tax hike has a negative impact on the bottom line of businesses, the reaction is quicker. A tax hike increases uncertainty among businesses about their ability to pay their bills in the future. By contrast, a tax cut signals a positive change, inviting more investments and new hires. However, since both those decisions will increase business costs over time the prudent business leader waits to see if the tax hike really goes through. Once the ink is dry on the tax-cut bill he can go ahead and confidently expand his operations.

My good friend Dan Mitchell over at the Center for Freedom and Prosperity shed more light on this economic psychology in a nice blog article from December last year. Politicians considering tax hikes, especially on corporations, would be well advised to take a look at it - and at the numbers I have reported here. This advice applies to Wyoming more than any other state, where the Revenue Committee has decided to recommend that the the legislature create a seven-percent income tax.

This tax is part of an even bigger package. The corporate-tax bill itself contains a poison pill that will create an income tax, and the Revenue Committee is also eyeing a property-tax increase of nine millings, a sales tax on services and on food, a hike in the gasoline tax and higher local sales taxes. It is nothing short of an economic doomsday project, a Taxmageddon about to hit the Cowboy State.

At its core is the proposal to take Wyoming from zero to a seven-percent corporate income tax.

With all the research and experience available to them, the legislators that will gather in Cheyenne after New Year would be well advised to reject all tax hikes and go for structured spending reductions instead. Having fought this tax monster for three years I know how determined the leadership is to get those hikes passed; with even less back-up this year than before I am worried that this will be the year Big Tax get what they want.
at October 16, 2019