A Warning about the Swedish Economy

The Swedish economy is in bad shape. The finance minister just admitted - without much fanfare - that it is going to get worse. A lot worse.


I have written about Sweden several times before, most recently in June when I compared my native country to Germany and Hungary:

Hungary, despite volatility in capital formation, has solid substance behind its GDP growth. Germany is not only statistically but institutionally and - apparently - psychologically the definition of a stagnant Europe. Sweden is Hungary's mirror image, showing signs that a risk-averse investor should take seriously. If I were investing my own money, I would pill them out of Sweden until the macroeconomic variables show substantial improvement.

Since then, the Swedish secretary of treasury has released the government budget for 2020. If there ever were a case where the devil is in the details, this is it. In this budget, the socialist government makes two admissions:

1. GDP growth is going to slow to 1.4-1.9 percent per year in the next few years; and
2. That is going to be the cap of the economy's growth capacity.

The last point is explosive. Yet this piece of news has not been covered anywhere in the media reports.

On page 9, Table 1.3, the budget reports its growth outlook:

a) could grow by, if it were performing at the top of its productive capacity, and
b) it is actually growing.

Potential GDP growth is calculated based on the highest possible employment level that the workforce-active population can attain, and the highest possible level of productivity that this workforce can extract from the existing stock of capital in the economy. It is, plainly, the structural maximum for production, consumption and income in an economy. 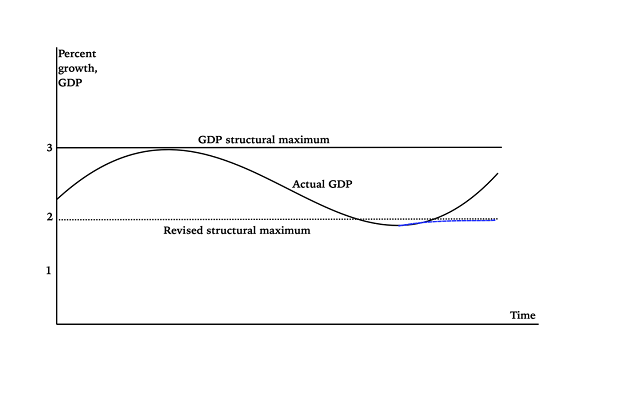 With its latest budget, the Swedish government has revised its structural maximum, saying that in the next couple of years it will drift down from somewhere above three percent to the two-percent vicinity. This will have a dramatic effect on actual GDP: since the economy cannot grow above its structural maximum, Sweden will no longer see growth levels above approximately two percent.

Since there is no mention of this in the budget, one would assume that the government's own research institution, the National Institute for Economic Research [Konjunkturinstitutet], had some publication where they explained what is behind this shift. They don't, leaving the field open for hypothesizing.

The normal way to roll up an analysis of an economic phenomenon like this would be to ask what structural factors are changing in the economy, and then ask what causes them. In Sweden, however, the first order of business is to ask why there has been no discussion over this. Swedish politics works according to the peculiar premise that the more important an issue is, the less discussion there is on it. This is not just a rhetorical quip; it is literally how the country works.

The origin of this tradition, best captured in Roland Huntford's book The New Totalitarians, is an unending trust in government and "authorities" of all kinds. Unlike the United States, where mistrust in government dominates the cultural mindset, the Swede has historically trusted government more than he trusts himself. This is why Sweden has the largest welfare state in the world.

As a result, problems of a societal nature are considered none of the citizen's business - by private citizens themselves. Bigger problems are above the private citizen's pay grade and therefore not anything for him to talk about.

Discussion, and disagreement, is generally antithetical to Swedish culture; there is a reason why Swedish high schools do not offer Speech and Debate classes. The public discourse is instead an arena for reaching consensus - not compromise, but consensus - where disputes are done away with regardless of whether or not the problem discussed, has been solved.

When the strive for consensus merges with blind faith in government, the room for discussing problematic, systemic issues narrows down dramatically. The issue of a declining structural maximum in economic growth, while specialized in nature, should be the subject of a public discourse, but it is also precisely the kind of issue that would be ignored.

This explains the lack of discussion in the general media outlets, but it does not explain why the government itself avoids the topic while at the same time publishing the pertinent data. Here, political preferences kick in.

There are a list of reasons why the Swedish economy is suffering a decline in its structural growth maximum. Of major importance is a long-term decline in the desire among businesses to invest in the country. Sweden has for a long time experienced a suppression of domestic growth, with private consumption being increasingly credit driven. High taxes and steep marginal rates have discouraged innovation and career development.

On top of this, the country continues to have an exceptionally large immigration from countries with generally low levels of education. Migrants with skills and training far below what a modern industrialized economy demands, become a lasting drag on workforce productivity. To the large extent that they cannot enter the workforce - or do not want to because of a generous welfare state - they cause a permanent rise in the support burden of the workforce.

A need, bluntly, for higher taxes in the world's heaviest taxed economy. Higher taxes weigh down on the structural growth maximum.

In other words, one big reason why the Swedish economy is now experiencing a permanent decline in growth is the erosion of workforce productivity. Another reason is that businesses in general have weaker incentives to invest in Sweden, partly because of the decline in workforce productivity, partly for reasons related to structural factors such as unreliable energy supply and an increasingly hostile tax and regulatory climate. The incumbent socialist coalition, consisting of the Social Democrats and the Environmental Party, has increased taxation on energy and transportation, and signaled higher local-government taxes (whose taxation powers are formally in their hands but in practice at the mercy of the central government).

Badly needed reforms to the labor market appear to be buried in government bureaucracy and political procrastination.

In addition to these factors, it is worth mentioning the long-term drift into economic stagnation that all welfare states experience. I dubbed this phenomenon "industrial poverty" in my book with that very same title. Sweden has lived high on the hog on its exports industry, but the ability of its exports to trickle down to the rest of the economy has been moderate, at best. For reasons I elaborate on in my book, the structural decline caused by an excessive welfare state has slowly caught up with the Swedish economy; compounded by the decline in the workforce caused by immigration, this traps the economy in stagnation-level growth (which is less than two percent per year).

There are, plainly, numerous reasons why the Swedish government would quietly concede that its long-term economic outlook is grim. The fact that this is not being discussed at a broader level is disturbing, but - again - not very surprising to someone familiar with Swedish culture and politics.

The only conclusion to draw from this is that anyone looking to invest in Sweden should think twice before committing any money to their economy.
at October 01, 2019