Will President Trump convince the Federal Reserve to "go zero"? Hopefully not. Europe has already shown us what happens if we do.


On July 31, the Federal Reserve cut its effective funds rate from 2.375 percent to 2.125 percent. This is a troubling trend in monetary policy, and it does not help that President Trump is now calling for a zero funds rate, or lower.

Although he does not say so explicitly, it sounds as if Trump wants zero rates in order to effectively wipe out the interest cost on government debt. While I trust President Trump with leading our country in many other ways, this is an area where he is playing with fire.

From a macroeconomic viewpoint there is nothing to be gained from zero rates - but the risks are considerable. Europe is always a good place to look for how not to do things, and zero-rate monetary policy is no exception.

On September 12 the European Central Bank lowered its deposit rate from -0.4 to -0.5 percent. Other European central banks outside of the euro zone have either kept their rates unchanged or lowered theirs in order to follow suit. While the Federal Reserve is more concerned - for now - about a U.S. growth slowdown, the ECB explicitly couples its rate cut with a relaunch of its infamous Quantitative Easing program. ECB president Mario Draghi

said risks to the eurozone outlook had increased as a result o f prolonged global trade disputes and concerns about the prolonged process involving the U.K. exit from the European Union. Risks of a eurozone recession remained "small," he said, but had increased the ECB's last meeting. Economists had been less certain whether the ECB would also move to relaunch its quantitative easing program at its September meeting, but policy makers did so. The ECB said it would being buying 20 billion euros a month worth of securities beginning Nov.1.

Here is where the ECB starts walking a very thin line. On the one hand it wants to keep government spending going - to blame the rate cut and the QE relaunch on "trade disputes" and Brexit is to engage in macroeconomic malpractice - while on the other hand it wants to avoid hyperinflation. It will be able to walk that line for some time, but eventually they will run out of rope.

That is where things get very ugly and the monster of hyperinflation starts flexing its muscles.

Before we get to the path from today's almost-zero inflation to hyperinflation, let us first dispel the myth about trade disputes and Brexit. Trade discussions between the United States and China have no direct influence on EU-China trade relations. China is the EU's second largest export market, gobbling up 10.7 percent of all its exports. China, Switzerland and Russia, the second, third and fourth largest export markets for the EU, together buy more goods and services from the union than the United States.

Put differently, even if the U.S. economy were affected by the tariff skirmish with China, it would only influence one fifth of the EU's total exports.

Brexit is also a small matter in the context. There has been no major change to the purchasing power of the British economy. There was a small weakening over last winter, but it followed the same business-cycle pattern as most other economies except the United States.

The real reason why the ECB is relaunching its QE program is simple and straightforward: the eurozone economy cannot produce the GDP growth needed to fund the zone's welfare states. It is the ambition to fund the welfare state in part through money printing that is so utterly dangerous.

Figure 1 reports the sum-total budget balance for all 19 governments in the euro zone, as a share of total government spending. It also reports real GDP growth, displaying a conspicuous but entirely predictable correlation. Until, that is, the Great Recession came roaring in: 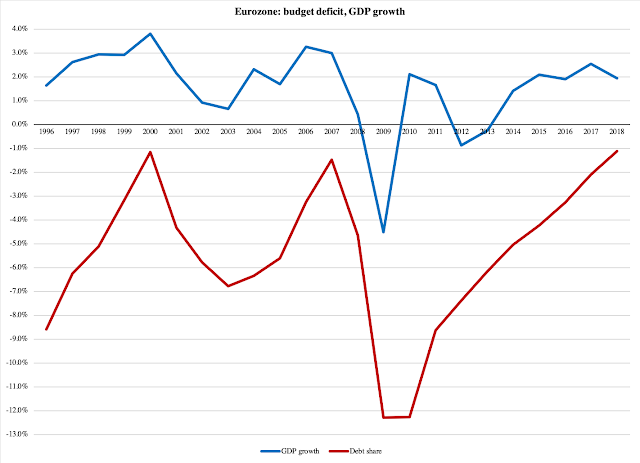 From the Great Recession and on - starting about 2011 - the EU and the ECB have coordinated efforts to both enforce austerity and keep government deficits affordable through Quantitative Easing. This has led to a situation where the budget deficit has declined steadily, but growth has not returned to its pre-Great Recession levels. Capping out at two percent (the industrial-poverty threshold), the euro-zone GDP is unable to grow enough to feed government with adequate amounts of tax revenue.

Instead of balancing the budget through modest spending and growth-generating tax reforms, the euro-zone governments have chosen the statist austerity track to reduced deficits. This means raising taxes and cutting spending - in other words making government more expensive by forcing people to pay more for every euro of entitlements they get - which in turn siphons money away from the private sector, suppressing growth in the bargain.

It is the cost of this growth suppression that the ECB is trying to mitigate with a relaunched QE program. The question is how much more money the euro zone can swallow before its monetary system starts spinning a web of inflation around the economy. Consider Figure 2, which reports the M3 money supply in the euro zone as a share of current-price GDP:* 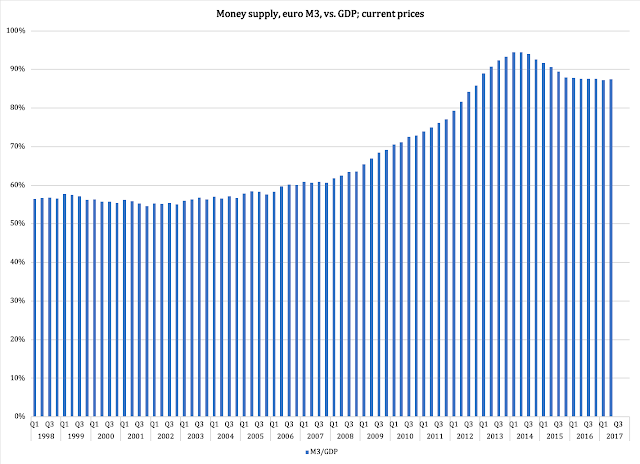 Then all of it comes out and you drench the economy in monetary hyperinflation. And just like ketchup, once it is out of the bottle you can't get it back in.

What we do know, though, is that when money supply grows in excess of GDP, the gap that ultimately opens up for hyperinflation will expand faster when GDP growth is suppressed by high taxes and an invasive welfare state. If we print more money than money demand can absorb, and the economy is growing rapidly, we reduce the risks of creating a pool of liquidity that slushes around causing spikes in prices. If, on the other hand, we use the money we print to fund an unsustainably large government, we accelerate the growth in the gap that lets hyperinflation in.

Figure 3 explains how conspicuously the ECB has gone about QE in the past: 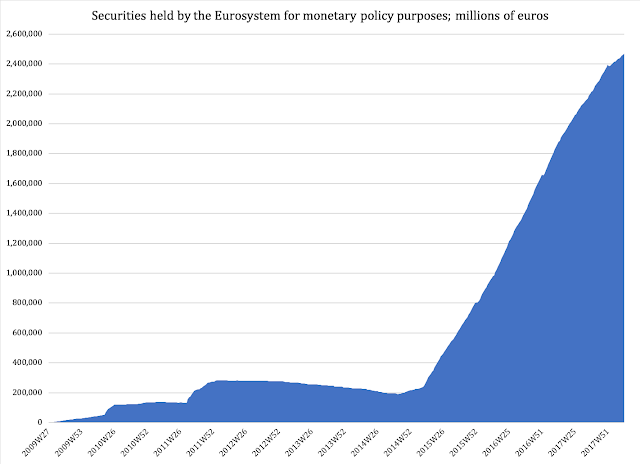 Bluntly, the ECB has funneled its newly printed money out into the economy by purchasing sovereign debt. In doing so, it has funded spending in the least productive sector in the economy - government - at the de facto expense of the private sector. The QE program has been used only as a supplemental funding source for government, to be added when government cannot squeeze more blood out of taxpayers.

However, that does not mean that it has eased the burden on taxpayers' shoulders: all it means is that once taxes have reached the point where not even statists dare to raise them further, they will monetize the deficit before they make meaningful, structural reforms to government spending. Since such reforms are off the table in Europe's deeply entrenched welfare states, the current funding model for big government, combining growth-suppressing taxes with reckless money printing, will remain in place.