What would it cost our country if today's interest rates returned to where they were the last time we had this strong an economy? Sit down before you read on.


In the first installment of this series I showed how, adjusted for inflation, wealth building in the United States is stagnating, at least as far as fixed assets are concerned. In the second installment I explained that debt levels are rising, even when taking into account wealth build-up in the non-corporate sector.

The remaining question is what this means for the U.S. economy going forward. We also need to consider the private asset-debt balance in the context of government debt.

Today's low interest rates help conceal the actual cost of our debt burden. We don't need much of an increase in interest rates to turn current debt levels into a major economic problem. To see why, let us first consider the cost of debt held by households to personal income, specifically disposable income. The Federal Reserve reports household debt in two categories, consumer debt and mortgage debt:* 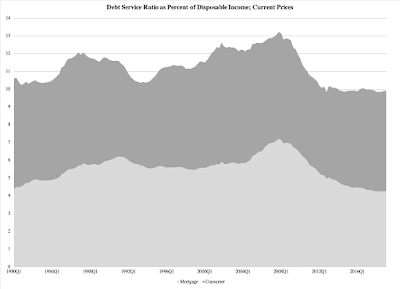 The Federal Reserve's debt service ratio for household debt shows that the cost of debt to households has gone down in recent years, and substantially so. After having topped out at 13 percent of disposable income at the beginning of the Great Recession, the veritable cleansing of mortgage and credit-card debt during the crisis eventually lowered the ratio to just below ten percent.

This is significant as we move forward. First, let us take a look at another important ratio, namely that between household debt service and household debt: 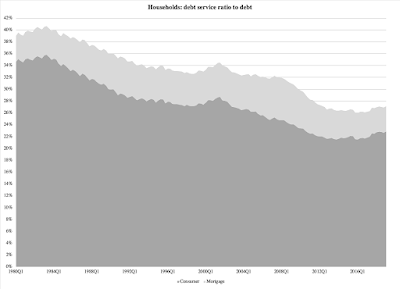 The ratio reported in Figure 2 explains how the cost of household debt has declined over time. Back in the 1980s America's families had to pony up about $40 every year for every $100 they owed in combined consumer and mortgage debt. Today that cost sits at about $27.

At the same time as the debt cost has declined, the debt-to-income ratio has increased. In the 1980s it averaged less than 23 percent; so far in the 2010s it has been 29 percent on average. This has the unfortunate consequence that if the debt cost rises, as it will if interest rates spike, it will deal a double blow to household finances:

To get a sense of what this means, let us recalibrate household debt and debt costs to where they were the last time our economy performed as well as it does now. We want to use that point of comparison simply to minimize the differences in income earnings: with relatively strong economic growth and low unemployment, the ability of America's families to pay principals and interest on their loans will be at its macroeconomic top point.

The last time our economy did as well as it is now was in the late 1990s. We had even stronger GDP growth, though unemployment was a tad higher. Comparing 2019 to 1999, we get a striking picture of what increased costs in debt service would do to U.S. families today.

Back then, household debt was at 32.8 percent of total disposable income. Today it stands at 27 percent. Households paid 10.8 percent of their disposable income in debt service, compared to 8.2 percent today. The lower debt ratio works to our advantage today, but if the debt-service cost would increase to 1999 levels it would cost American families another $424 billion per year. This is money they would have to take out of current spending and savings.

This increase in debt cost is equal to more than 42 percent of what we spend at the grocery store every year. It is equal to a year and a half of purchases of new passenger vehicles. In other words, it is a sizable bite out of the economy. It would make a difference, and not for the better.

It does not take a whole lot to cause this kind of increase in debt costs. In 1999 the Federal Reserve kept its funds rate at five percent; today their target is close to two percent. An increase in the funds rate for two to five percent would not automatically cause the costs of private debt to rise as suggested here - a lot of other factors go into determining debt costs - but it is an example of an event that would contribute to a problematic rise in debt-service costs.

To make matters worse, a rise in the interest rate would not just affect the cost of private debt. It would be notably harmful to the federal government. Back in 1999 the U.S. government owed $5.6 trillion, for which the federal government doled out $353.5 billion in interest payments. This comes out to a 6.3-percent debt service cost (assuming all debt was rolled over and none terminated).

Today, the federal government owes a total of $22 trillion; the idea that we should disregard the $5.85 trillion not owned by the public boils down to creative accounting. For this debt the U.S. Treasury paid out $539.1 billion last year, putting the debt service cost at 2.45 percent of the debt.

Suppose, now, that we returned to the levels where interest rates were in 1999, and that this brought the cost of the federal debt back to that year's level. This effectively increases the cost of today's debt by $841.4 billion to a total of $1.38 trillion. The total cost of the debt would be $250 billion higher than for Social Security. The increase in the debt cost alone would exceed the cost of Medicare and the federal education budget together.

Now for the nightmarish part of this: suppose we raised taxes to cover the increase in the debt cost (effectively still borrowing to pay what the debt costs today). Since households pay 80 percent of federal taxes through income taxes, they would shoulder 80 percent of that tax hike, assuming the remaining 20 percent is picked up by corporations.** Suppose now we did this at the same time as households see a rise in their debt costs as explained above.

In total, this rise in debt costs would take just over $1 trillion out of consumer pockets. To accommodate this cost, America's families would have to cancel all purchases for one year of passenger vehicles and parts, all clothes and shoes, and all telecommunication services - combined.

The trigger for this scenario is a return to a federal-funds rate of five percent. How likely is that scenario? More likely than we would like to admit. The most remarkable economic difference between 1999 and 2019 is that back then the federal government was running a budget surplus (thank you President Clinton and House budget chair Kasich). Today, our federal government is borrowing 24 cents of every dollar it spends. We are a razor-thin line away from a debt crisis; the only way to avert it is for the Federal Reserve to return to Quantitative Easing.

In short: heaps of money printing.

That, or an interest-rate shock that will send tremors through the entire economy.

The root cause of our debt problems is slow GDP growth. That, in turn, is caused by a Congress that is inept at reining in spending. Once we get the federal government's budget under control, we can slowly start turning around our debt-filled Titanic.

---
*) The Federal Reserve reports household debt in two different forms, revolving vs. non-revolving, or installment, and consumer vs. mortgage. In the first installment of this article series we looked at household debt under the first dichotomy; more detailed analysis would require adjustment between the two dichotomies. That is entirely possible, but not relevant for this article. The method for making the two dichotomies compatible is captured in the point that all mortgage debt is installment debt but not all installment debt is mortgage debt.
**) In reality, households pay 90 percent, the remaining ten percentage points coming from excise taxes such as the gasoline tax. For the purposes of conservative estimation, we limit the household burden to 80 percent.
at September 11, 2019