Why is our consumer debt on the rise, and our wealth creation stalling?


In the first part of this series I concluded:

American families are having trouble building wealth. Corporations are still doing relatively well, and their comparable success is not due to greed or any other Marxist myth. However, that does not mean that what appears to be a looming stagnation in household wealth is unproblematic in any way.

This picture of stagnant wealth accumulation is reinforced when we take consumer credit into account. I have written about household indebtedness before, but then only in the context of how it relates to personal income. When that debt is contrasted to assets, it reinforces the the picture of Americans having trouble building wealth.

Consumer debt consists of two major categories: revolving debt, such as credit cards; and non-revolving or installment debt, which is a loan we pay off bit by bit. Figure 1 reports how debt in these two categories has grown since 1980:* 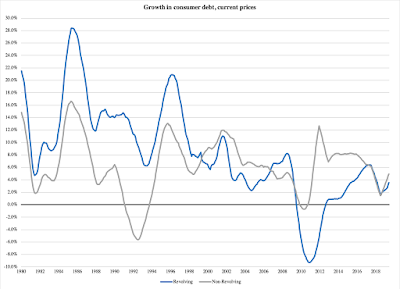 Consumer debt grew substantially in the 1980s, especially on the revolving side. It is interesting to note how the growth rate tapered off somewhat in the 2000s, but even more remarkable is how this type of debt ground to a halt for several years after the Great Recession - despite the fact that the popular narrative about the crisis is that mortgages were to blame. In fact, installment loans barely stopped growth at all at the bottom of that recession.

There are reasons for this, of course: in the wake of the Great Recession Congress overhauled laws and federal agencies revamped regulations related to consumer credit. Nevertheless, revolving credit has only grown 11 percent in the past ten years, while installment-loan credit has grown by 87 percent. The total consumer-debt burden has grown by 59 percent.

During the same period of time, personal income - out of which we pay back our loans - has grown by 54 percent. We have, simply, grown more indebted as a result. Figure 2 reports: 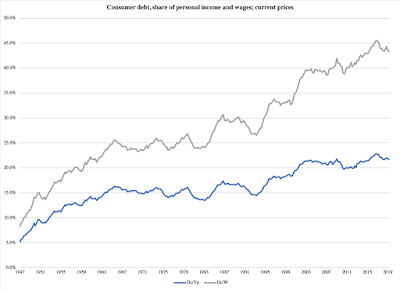 It is worth noting the differentiation in Figure 2 between debt as share of total personal income and as share of wages. A properly functioning credit system relies on recurring income for the debtors to pay back what they owe; the more stable that income is, the more predictable is the flow of repayments. When there is stability in income, by default - but not by necessity - there is stability in the debt market.

Unfortunately, as I have reported elsewhere Americans earn less and less of their income through wages and salaries. These relatively stable means of earning a living are slowly giving way to tax-paid entitlements and equity-based income. Compensation of employees, which adds benefits to wages and salaries, account for barely 60 percent of our personal income, in current prices; equity-based income is the second-largest source, growing steadily together with transfers from government. Figure 3 reports, with the decline in employee compensation as columns in the background (right axis) and the rise in the income shares from equity and entitlements in the foreground (left): 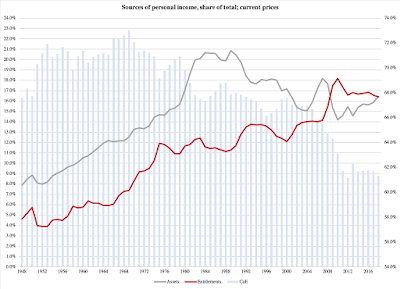 This shift in where we earn our income affects our ability to maintain debt payments. If this continues it will eventually but inevitably have negative repercussions on the wealth of the American people.

And now for the most conspicuous indicator of withering prosperity, namely a direct comparison of the value of private fixed assets, excluding that owned by corporations, and consumer debt. Non-corporate fixed assets consist in mostly of assets owned directly by households, but it also includes sole proprietorships, partnerships and other forms of asset ownership that are more closely related to household finances than corporately owned assets. Figure 4 has the story: 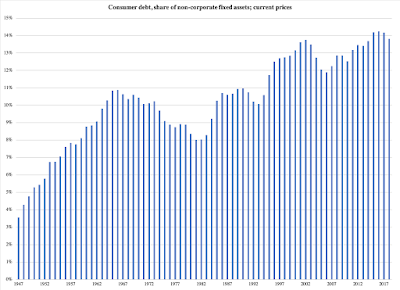 The ratio calculated in Figure 4 illustrates a trend in household finances that is of more interest from a macroeconomic than legal viewpoint. The two variables, private fixed assets and consumer debt, are not perfectly comparable; it is not the case that our fixed assets serve as direct collateral for consumer debt. There is a relationship between our ownership of homes and cars, primarily, and installment credit, but the assets counted into the numbers used in Figure 4 span a wider definition than that.

Economically, the big take-away from Figure 4 is that our debt is outpacing our equity. Keeping in mind that this analysis only takes fixed assets into account, it is nevertheless important to note how American families are borrowing more than they are building equity. Furthermore, fixed assets are more commonly owned across income brackets than financial assets, which are typically owned in any meaningful amounts by the highest-earning households.

Take into account here the rise in consumer debt vs. personal income, specifically earnings from work. Generally, households that earn less than $500,000 get more than two thirds of their income from work; only households with $1 million or more in annual income depend predominantly on assets for their earnings. When work-based earnings stagnate, as they have done with the slowdown of GDP growth in the past 20 years, it impairs the ability of most Americans to build wealth.

To maintain their standard of living they go more deeply into debt. Payments on debt inevitably claim more of our income; as debt slowly outpaces equity, that same debt also claims an increasing share of our asset values. Over time, this makes us more vulnerable to recessions: debt defaults will come sooner as personal income declines, followed by faster-rising problems for financial institutions.

There is one more installment coming in this article series. Stay tuned.

---
*) This period is chosen because of anomalous volatility in revolving-debt growth in the 1960s and 1970s. It is likely that the volatility can be attributed to the emergence of the credit-card market in the 1960s. Once the market for this type of credit was settled, its growth figures stabilized, allowing for longer-term statistical review.
at September 06, 2019