---
Yes, we are still one of the most prosperous nations on Earth - the most prosperous, in fact, if we disregard one-trick-pony economies like Hong Kong, Brunei and Luxembourg. But that does not change the fact that our prosperity is slowly withering away.

In a series of articles we are going to analyze data showing how we as a nation are losing our wealth, and how government is to blame for it. The long story very short is that before we went into full gear trying to emulate the European welfare state, we were on a steady track of building wealth, growing more prosperous over time and not drowning in debt.

Once we kicked our welfare-state construction efforts into high gear, we also began socializing wealth - in other words, eroding it.

This the first part will look at wealth in the form of private fixed assets and how our holdings of them have evolved over time. In subsequent articles we will take a look at private debt, how it compares to assets (for net worth), and finally how the trends in debt and equity compare to the degree of economic redistribution.

Private fixed assets are of various kinds. In 2018, we all owned $47.8 trillion worth of private fixed assets, in current prices. That number breaks down as follows (courtesy of the Bureau of Economic Analysis):

We can then break down the same assets by type of owner, in other words corporations, non-corporate businesses and households:

Homes account for roughly 75 percent of household-owned assets, with durable goods making up the rest.

Fixed assets represent wealth - not all of it but an important part - and wealth is a good part of our prosperity (the standard of living out of current income being another important part). It is reasonable to expect that a nation's wealth increase over time, as we grow more prosperous and our best times are ahead of us. In a healthy economy, growing generations can have a brighter future than their parents had.

While there is still a great deal of truth to the notion that young Americans have a bright future, it is not so much true anymore that they will achieve a higher standard of living than previous generations. There are many ways to show this, one being the notorious inability of our economy to sustain growth above the two-percent level necessary for advancements in the standard of living.

Another, perhaps even more conspicuous window to our withering prosperity is a set of trends in the worth and growth of private fixed assets. Fundamentally, all our assets, including financial, depend on the performance of fixed assets: the stock value of a corporation is to a large extent tied to the fixed assets that the corporation uses for its manufacturing or services production. A car company ultimately fails if its assembly lines are not in good shape or if its research and development facilities are not up to standard; a hotel company stands and falls with the quality of its hotel rooms.

The workforce is always critical to the survival of any business, but if they do not have prime-rate facilities and equipment to work with, they will not be able to channel their skills into the products with which the corporation makes money.

Likewise, when households see growth in their assets, such as home values rising, it means - over time - that they have grown more prosperous. They live in homes of gradually better quality, and the potential for building equity for retirement is higher.

Therefore, growth in private fixed assets is essential to our gradual economic progress as a country.

Unfortunately, not all is well here. On the contrary: we are heading in the wrong direction. Superficially, there is nothing to worry about: the worth of our private fixed assets is growing over time, even when viewed in comparison to GDP. Figure 1 reports that ratio with focus specifically on assets owned by households: 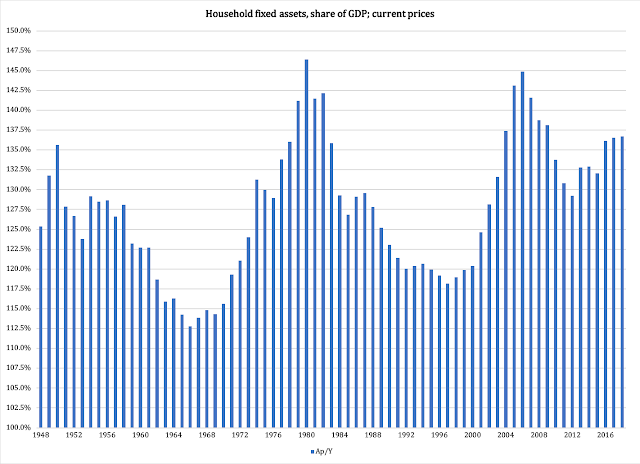 Taking cyclical variations into account, it looks like our wealth is evolving nicely over time. In fact, it even looks like we survived the Great Recession in 2008-2010 fairly well.

However, if we take inflation into account, things look a bit different. Figure 2 reports inflation-adjusted numbers for both fixed household assets and GDP:* 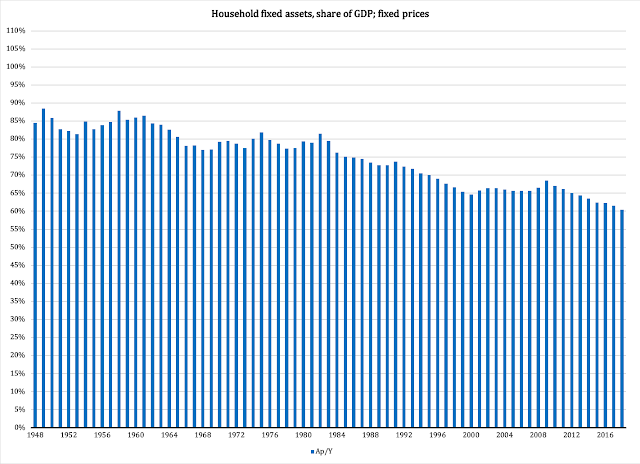 Now things look a bit different. Normally, a healthy-growing economy would allow households to build more wealth, which would be reflected in their fixed assets. However, since the 1980s there has been a steady decline in fixed-asset growth for households, relative the growth in GDP.

There is an important message in these numbers. Our GDP is not being used to build household wealth the way it was before the 1980s trend shift. What are we using our GDP for, then?

As Figure 3 reports, this is not happening. Even if we add together all forms of non-corporate wealth, including the ownership of sole proprietorships, partnerships, non-profit institutions, tax-exempt cooperatives and assets own directly by households, we still get a downward trend in the non-corporate to corporate ratio of asset value: 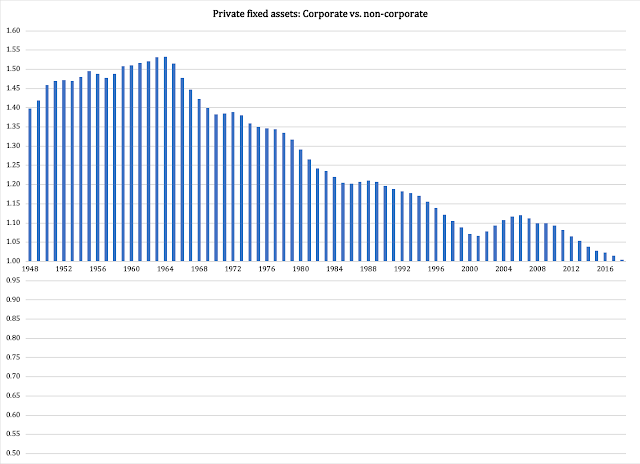 Starting in the 1960s, growth of wealth was increasingly concentrated to corporations. There are many explanations to this - and we need to remember that the U.S. economy is a very complex system with hundreds of millions of moving parts - but a long-term trend like this tells us two things.

First, this is not the work of some isolated reform. One change to the institutional structure of an economy, such as a regulatory overhaul or a tax reform, would have a one-time effect on this ratio. It would ratchet it down but the ratio would then stay largely unchanged over time. Instead, the long, sustained trend with an asset value shift into corporations is the work of a structural phenomenon that is continuously affecting the economy.

More than likely, the wealth concentration to corporations is not the result of any particular feature of our economy that is benefiting corporations at the expense of households and non-corporate businesses. A more reasonable explanation is that we are looking at the result of changes affecting the non-corporate sector specifically. The increase in taxation that followed on the heels of the War on Poverty significantly affected families, and businesses filing under the personal-income tax code. Since the federal government gets 80 percent of its revenue from individuals, and a comparable number applies to the states, the growth in entitlement spending that began in the 1960s inevitably had to affect America's non-corporate sector.

In summary, American families are having trouble building wealth. Corporations are still doing relatively well, and their comparable success is not due to greed or any other Marxist myth. However, that does not mean that what appears to be a looming stagnation in household wealth is unproblematic in any way. We need to identify its causes.

For that purpose, stay tuned for Part 2 of this series.

---
*) Inflation adjustment is done in a somewhat experimental fashion here. Asset values are deflated by means of a price index published by the BEA specifically for that purpose. However, the removal of inflation from GDP does not lend itself directly to a comparison like this. The inflation-adjustment index for assets is just that - an index - the numbers calculated here start from the current-price values of 1929. From that year, the values are increased by the inflation-adjusted index. A similar method is used for GDP; using real-GDP numbers from the BEA would convert annual figures to 2012 prices, which artificially skews the asset-to-GDP ratio. The GDP numbers used in Figure 2 are calculated from 1929 current-price GDP, using the 2012-price based growth numbers. This is not an ideal method - using 1929 as the base year had been better - but it does give a good idea of the long-term trend in the asset-to-GDP ratio. The BEA used to provide GDP numbers with older base years, which if available would have been better suited for this review. However, in lieu of such numbers the method used here is closest to an accurate picture of how assets have evolved vs. GDP.
at September 03, 2019