Using some not-often reviewed sets of data from the Bureau of Economic Analysis, this article presents a "naked" view of government spending and revenue. If you are a libertarian, it is not a pretty picture.


As the 2019 federal fiscal year draws to a close and the Federal Reserve is basically pledging to return to Quantitative Easing, it is time to take another look at the finances of our beloved government. This includes both federal and state-local governments.

For this, I have retrieved some less-used data that give us the raw, unfiltered image of government revenue and spending. Under its National Data section, the Bureau of Economic Analysis publishes Tables 8.3 and 8.4, which report unfiltered numbers for federal and state-local government spending and revenue. The "unfiltered" part means that the numbers are not adjusted for inflation or seasonal variations. The latter is unimportant for annual data, but these are quarterly numbers, thus giving us a relatively good, detailed image of how government finances unfold over time.

Better still is the fact that we can add together all levels of government under the same statistical banner.

When we do, the image of government spending, revenue and - worst of all - deficits are quite stunning. Let us start with spending, reported in Figure 1. The blue share is federal outlays, the dark grey is state and local government spending, funded by their own revenue; the light grey segment is the money that the federal government pays out to states for a host of programs (Medicaid, transportation, welfare, K-12 education, etc). Behold and marvel as we add them all up: 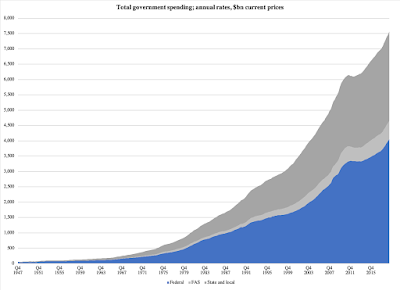 As Figure 1 suggests, not only has government grown monumentally, especially in recent years, but its bulk has also shifted. While the federal government still represents the largest share of spending, in relative terms its role has shrunk over time. Up through the 1950s the federal government accounted for more than two thirds of all government spending; in the past four years that share averaged 52.8 percent.

The shift in growth of government from the federal level to the state level is also visible on the revenue side. Figure 2 explains: 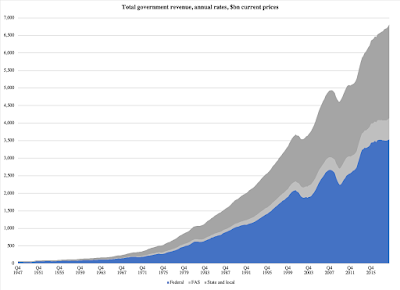 The astute reader has already noticed that there is a bit of a difference between the total spending numbers. In Q2 2019, the annual amount spent by federal, state and local governments amounted to almost $7.6 trillion, while total revenue stopped at $6.8 trillion. (These numbers add together spending in each one of the past four quarters, thus giving us an annual number.) Of the $747.1 billion deficit, 70 percent is federal, leaving $225 billion in total deficit among the states and their local governments.

For the four quarters ending in Q2 2019, governments in the United States borrowed 9.9 percent of their total spending. This is up from an average of 4.6 percent in 2015. The federal government is responsible for the bulk of this growth: for the calendar year 2015, Congress ran a deficit equal to 1.8 percent of spending; in the most recent four-quarter period that deficit had increased to 11.2 percent of spending.

In current-price dollars, the total deficits have looked like this over the years: 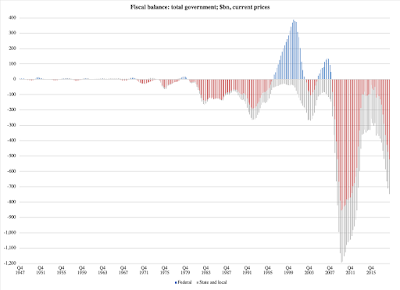 The numbers presented here are a bit different from those we usually discuss when we talk about government finances. The reason is, again, that these are raw, quarterly numbers without any technical adjustments; these numbers are then added up to annual numbers simply with a moving four-quarter addition. Looking at the data this way, a surplus builds up due to the revenue surge following the Bush tax cuts. In the regularly used data, we still have annual deficits, simply because the Office of Management and Budget, the Congressional Budget Office and other sources use either calendar-year or fiscal-year data. The moving-total numbers used here are better in the sense that they put a trend on display, but we should also understand how they differ from regularly referred data.

From that perspective, read as a trend display, Figure 3 highlights a point I have made repeatedly in the past: our government started running a budget deficit with the launch of the War on Poverty. By the end of the 1970s that project - really a European-style egalitarian welfare state - had reached its full proportions. It became increasingly difficult for both Congress and the states to balance their budgets.

In a follow-up article we will look at how these numbers stack up against GDP. Stay tuned.
at September 26, 2019