Government Is Not Cheap

Conventional wisdom says that just because a state has no income tax, its government doesn't cost much money. It is time to dispel that myth. This article, republished from another blog of mine, shows that Wyoming, which has no personal or corporate income tax, has the second costliest government of all states.


Some truths need repetition. For example: if you raise taxes, people will move to other states with lower taxes. As plain, simple and obvious as this truth is, some people still believe that it is a good idea to raise taxes here in Wyoming.

Those tax-hikers apparently do not believe that there is a correlation between higher taxes and outbound migration.* Therefore, I spent the past two days assembling, processing and analyzing interstate migration data, and data on taxes and private-sector GDP, from 2005 to 2016. This is the largest set of data on this subject that I have reviewed (612 pairs of data from the 50 states plus the District of Columbia) and as Figure 1 below explains, the results are unmistakable:

After we review the data in Figure 1, we will take a look at some specifics for Wyoming. A teaser: our government is one of the costliest in the country.

Now for Figure 1. It reports the correlation between interstate migration and the cost of government:

--Interstate migration is measured as a ratio between outbound and inbound migration. A number of 100 means the two cancel each other out; when a state scores more than 100, it has a net interstate migration inflow; when the score is below 100, the net flow is negative and the state loses more people than it gains.
--The cost of government is measured as total state and local government revenue from "own sources", in other words taxes and fees levied on the state's own residents. This excludes federal funds. State and local government revenue - which again includes fees and charges in addition to taxes - is then divided by private-sector GDP. This allows us to see the true cost of government as it burdens the production value of private businesses, which is the most comprehensive tax measure in the economy.

The last point is crucial: no matter how you slice a system for raising revenue to government, it is always confined to the total production value of the private sector. Therefore, Figure 1 reports the best possible comparison of the cost of government and interstate migration. The 612 pairs of data are organized into ten deciles with 61 in each (except for the tenth which includes 63 pairs): 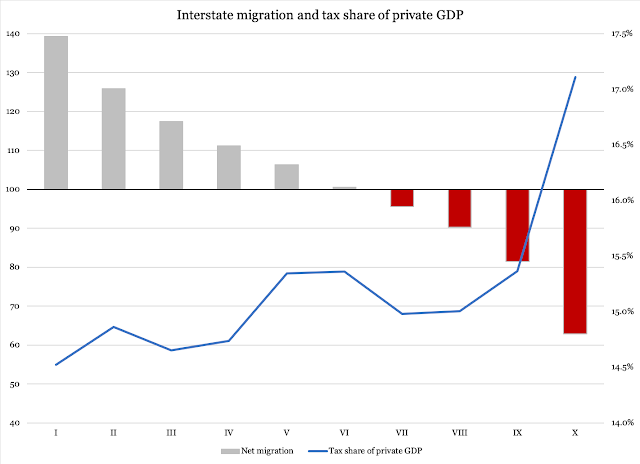 There is a clear trend in Figure 1: in order to secure net immigration, a state needs to keep the cost of its government below 15 percent of private-sector GDP, i.e., production value. We also see that outliers that raise their taxes high above 15 percent (deciles IX and X) will also see a consistent net migration loss to other states.

How, then, do individual states fare? Table 1 reports the total cost of state and local government, again as total taxes, fees and charges from in-state sources; divided by private-sector GDP: 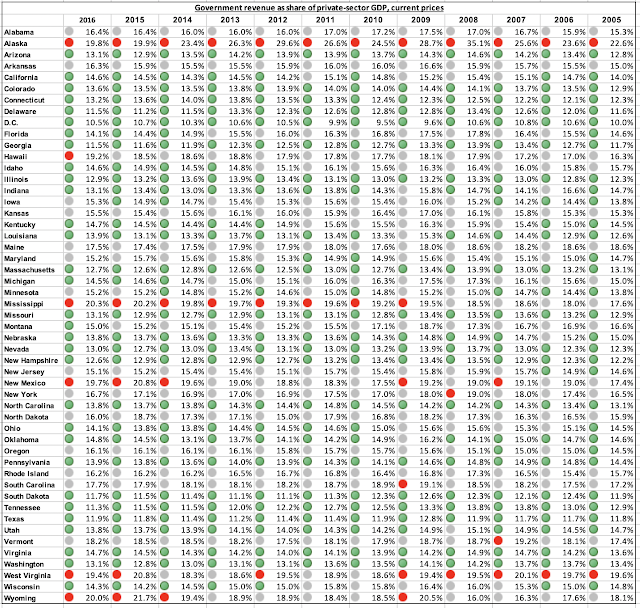 The color coding differentiates states into three groups: green for states with less than 15 percent government cost; grey for 15-19 percent; and red for a cost in excess of 19 percent. Wyoming is one of only five states with four or more "red" years, and one of 14 states with not a single "green" year. Obviously, this score can be criticized for randomly chosen categories, and anyone is free to put the categories at whatever numbers they want. What we cannot disregard is the fact that in 2016, Wyoming has the second costliest government of all states. Only Mississippi takes in a larger share of private-sector production value than Wyoming does.

In 2015, we had the highest government cost of all states. In fact, we have been in the top five since 2009,  but our government was not exactly cheap before that either.

Alas, it is not exactly a big surprise to see that Wyoming lost population through migration in nine of the 12 years covered here: 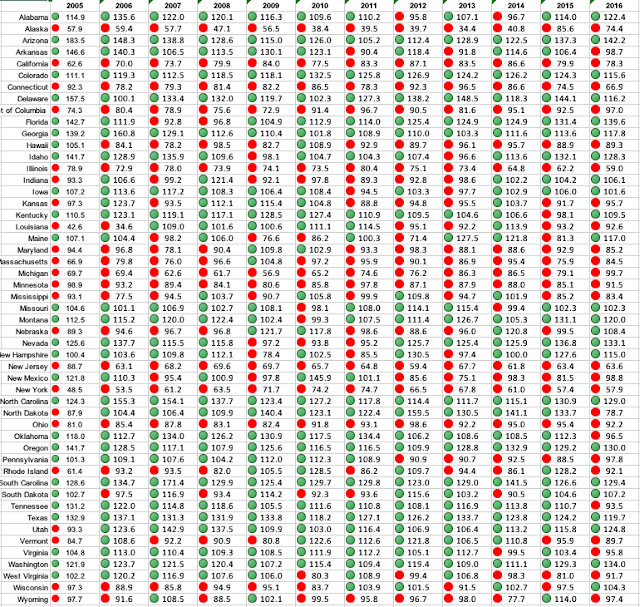 The fact that our state's population has increased for the most part of this period is due to a relatively high birth rate, and to the fact that in some instances, outbound migration has been only marginally higher than inbound migration. Nevertheless, the negative trend persists, and it might be worth adding that the people leaving our state make less than those moving in. It has been about two years since I reported data on income and interstate migration; as soon as time permits, I will update those numbers.

For now, let us repeat the indisputable fact that:

---
*) There is, of course, the more disturbing possibility: they don't really care. I am reluctant to draw this conclusion, but I also want to point to the ENDOW report, which talks about attracting more immigrants to Wyoming. The purpose appears to be to replace those who leave the state, and to do so in a way that won't upset the local culture. I will leave it to anyone so inclined to interpret what this really means; I, for one, do not see the point in maxing out the cost of government, drive Wyomingites to leave and then somehow encourage others to move in and replace those who left. It is a monumental waste of money and human resources. Would it not be better to cut the cost of government so people can afford to live where they want?
at September 25, 2019