Waging a War of Attrition on the Welfare State


As Uncle Sam goes deeper and deeper into debt, currently borrowing 24 cents of every dollar it spends, everyone dependent on the federal government is at risk losing substantial amounts of cash or significant in-kind benefits.

We are already seeing the very first signs that Congress is reaching the end of its debt rope. The Federal Reserve is hinting of a return to Quantitative Easing, though this time it would happen in a situation where interest rates are already low and our money supply already excessive. While some economic mythologists proselytize Mad Monetary Theory (MMT) as a way to motivate destructive levels of money printing, people who still dwell in the realm of common sense know that destroying the currency and provoking Venezuelan hyperinflation is not the way to move forward.

Sadly, until Congress gets its act together and starts practicing fiscal conservatism, our future is only marginally more palatable than what Mad Monetary Theory would do to us. The upside is that there are people out there trying to find ways to actually bring some sort of balance to The Force - or the federal budget, whichever is easier. The downside is that the prevailing wisdom of the proposals being put out there says that we can actually save the very welfare state that is pulling us down into the debt-crisis dungeon.

We can't save it. To see why, let us look at an example. In Cato Institute Policy Analysis #871, John F Early, who runs a consulting business in mathematical economics, presents reform ideas for Medicare that, according to him, will make the program fiscally sustainable. We must, he says,


We can discuss the numbers behind each of these proposals, but the main problem with them is that they erode promises that government has made without lowering the cost to taxpayers for those eroded promises. On the contrary, people eligible for Medicare will see an increase in their costs for using the program, both directly in the form of increased expenses and indirectly in the form of weaker eligibility.

This is a reform philosophy that Europeans know as "austerity". It has been practiced in their welfare states for decades, at varying levels of severity. It is used as a way for government to roll back promises it can no longer keep, the goal always being to save the welfare state when taxpayers can no longer afford all its promises.

There is a structural problem built into the welfare state that makes it unsustainable by logical necessity. I will return to this issue, with reference to Medicare, in a moment; for now, suffice it to say that it is this nature of inherent unsustainability that make it impossible to save the welfare state with austerity reforms.

We are not just theorizing here. There is plenty of evidence to back up this point. When faced with the unsustainability problem 25-30 years ago,  Sweden and Denmark resorted to the kind of austerity Early proposes. It did not work: both countries are still struggling - and struggling increasingly hard - with yet more spending cuts, yet more "adjustments" to eligibility.

We should draw on this experience, of course, but we should also recognize that there is a thin line between the Scandinavian struggle to maintain an unsustainable welfare state and the Greek fiscal meltdown. The latter is a time-capsule concentrate of the former, and both scenarios are equally possible in America.

They are also equally bad, even though the Scandinavian war-of-attrition reform model on the face of it seems to be less painful. It is not; all it is, is a marginally less unpalatable alternative to a Greek-style crisis.

And, as I explained in a two-part paper for the Center for Freedom and Prosperity last year, a Greek crisis is entirely possible in America. It would be ugly and unforgiving. Congress would unceremoniously put entitlement after entitlement on the fiscal chopping block. Taxes would go up drastically - in Greece they increased from 39 to 50 percent of GDP - while the welfare state would be devalued to where it would barely provide subsistence living for the masses who will depend on it.

Unfortunately, the policy proposals that John Early brings forward will unfold the Scandinavian attrition path while also opening the door for the Greek disaster.  The heart of his problem is that he thinks Medicare can be saved with modifications that are functionally similar to those that Congress have made to Social Security. To reach this conclusion, Early begins with a cursory, and shaky, review of some basic numbers:

In 2016, Medicare spending constituted 3.64 percent of GDP. That is a sixfold increase since 1967, the first year after the Medicare program began operation. However, Medicare growth will not stop at this current level; long-range projections estimate that it would grow to between 9.00 and 19.79 percent of GDP by 2091

This is the gist of his analysis. It is similar to the reasoning that goes into many policy papers and underpins many proposals for entitlement reform. It still amazes me that you can get away with this kind of "forecasting" and still be taken seriously in public policy circles.

Notably, Early's paper does not discuss Medicaid, which is the other leg of tax-paid health insurance. For comparison, Figure 1 reports the growth trajectory of both programs (with Medicaid including CHIP): 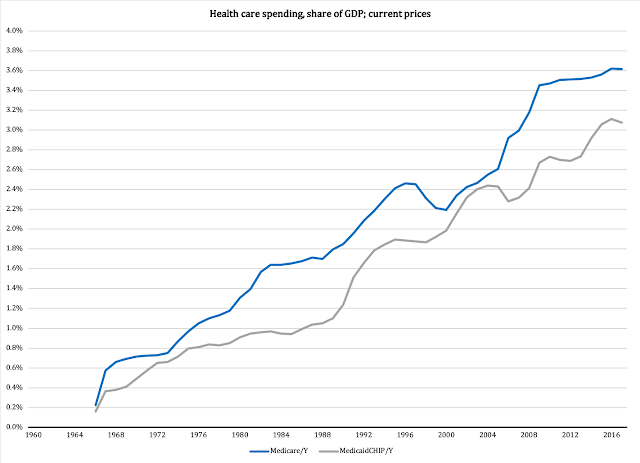 Not only is Early being irresponsibly shallow in his account of historical Medicare spending, but he also ignores - carefully - the institutional changes that have happened to the program throughout its history. Medicaid Part D is probably the best example:


Since 2011, that share has remained almost unchanged, increasing marginally to 3.6 percent by 2017.

In other words, it is unreasonable to give the impression that Medicare spending will continue to grow as it has, based on a brief and misrepresentative account of its history. It is precisely this type of reasoning that eventually leads to bad policy reforms.

The second problem with Early’s account of Medicare spending is that he extrapolates spending trends from an account of the program's history that fails to account for essential causes of spending growth. Specifically, Early predicts Medicare spending 75 years into the future - a time period that in and of itself is highly irresponsible. How many people in 1945 could with even a shred of confidence have predicted spending in any part of the federal budget by 2020?

Yet it is based on this forecast that Early then goes on to recommend spending reforms with confidence - a confidence that is absolutely not mirrored in his own work. He motivates those reforms with the numbers he gives for where Medicare spending will be in 2091: between nine and 19.79 percent of GDP.

Not 19.78 or 19.80. The upper limit is 19.79 percent. That aside, though, the problem, of course, is that Early leaves a confidence window at the end year (the difference between the two numbers he gives for Medicare’s share of GDP) of almost 120 percent. Based on this window he proposes policy reforms to change, and “save”, Medicare.

The only problem is that a confidence window of 120 percent is practically useless in a policy context. His lack of forecasting precision is like an airline sending a passenger jet from New York to Seattle, saying that “it might land at SeaTac, but it could also land at LAX or in Anchorage”.

Based on a forecast with this level of precision - or lack thereof - Early is asking us to consider a concrete set of policy reforms.

It pays for health care out of tax revenue, without connecting its health-care promises to what taxpayers can afford.

It could be objected that it is precisely this that John Early wants to address with his reforms. His solutions will not do the trick though, and here is why. Figure 2 compares the growth rates of national health expenditures and in the broadest possible tax base, i.e., current-price GDP: 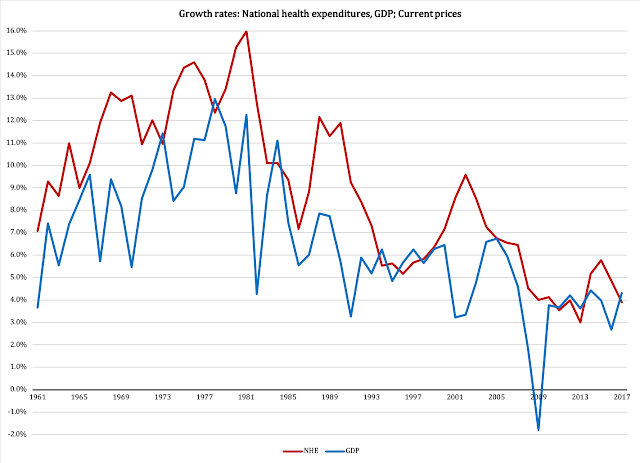 Health care has outgrown our tax base for longer than Medicare has been around. This is not a problem that John Early's reforms will solve - all they will do is make one adjustment, at one point.

If there is anything we can extrapolate from these numbers, it is that health care will continue to outpace GDP over the next 75 years. Therefore, we need reforms that do not erode the promises that government makes - in other words effectively raise taxes for Medicare - but which sever the ties between the taxpayer and health care spending.

Only a full privatization of health insurance can ultimately save the federal budget - and our access to health care at all stages in life. It is as simple, and as difficult, as that.
at August 20, 2019