Greece: Have We Learned The Lesson Yet?

It has been a decade since the outbreak of the worst economic crisis in the Western world after the Great Depression. Aptly named the Great Recession, this crisis did a lot of harm to a lot of people in a lot of countries, but nowhere was the harm deeper and more painful than in Greece. In view of the continued, and increasingly reckless deficit spending in the United States, here is a review of the Greek crisis - and why we must not forget about it.


Ten years ago Europe was in the middle of a very serious economic downturn. The United States followed, though not quite at the same pace and not to the same depth. Among the European countries hit worst was Greece, where the EU, the European Central Bank and the International Monetary Fund enforced a highly destructive austerity policy. As a result, Greece lost one quarter of its economy and its welfare state was destroyed while taxes increased radically.

There was a lot of media attention on Greece in 2009-2014, the worst austerity years. Since then, however, attention has faded and the Hellenic republic has drifted into oblivion. This is wrong both morally and economically; the moral problem is that the EU-ECB-IMF troika devastated the Greek economy and then ignored the consequences.

Economically, Greece is a stark warning to other countries what happens when your welfare state becomes unaffordable - and you try to save it by means of austerity. As I explained in my two-part paper for the Center for Freedom and Prosperity, not even the United States is shielded from a Greek-style fiscal crisis (see Part 1 here and Part 2 here). However, other countries are ahead of America on the slide down into the abyss of austerity and industrial poverty. Sweden is a good candidate, but not the only one.

More austerity policies in Europe, of the kind that Greece was subjected to (as were other European countries, though to a lesser degree), would wreak havoc on the continent's economy. Greece has not recovered - the country's GDP, adjusted for inflation, is currently at the same level as in 2001: 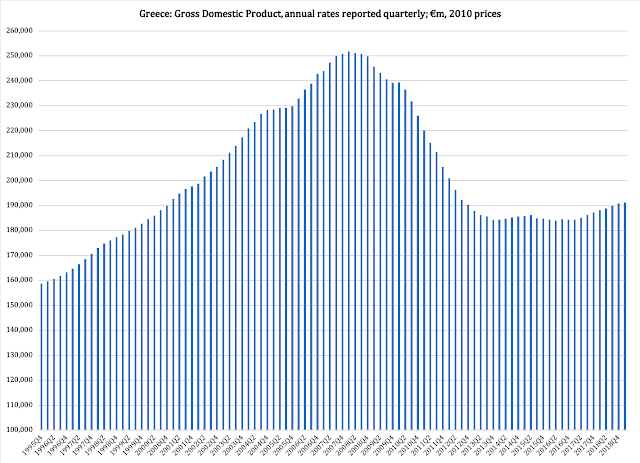 It is an epic loss of economic resources when one quarter of GDP is destroyed. This is not just a statistical phenomenon - it is very much a problem in the everyday lives of the Greek people. Imagine losing one quarter of your income, then seeing taxes take 20 percent more of every dollar you have left. Imagine the services you get from government being diminished by one quarter (while you, again, pay significantly more in taxes for whatever you get now).

In some areas of the Greek economy the loss has been even more devastating. Business investments, for example, have declined by a whopping 60 percent since before the economic crisis - in real terms: 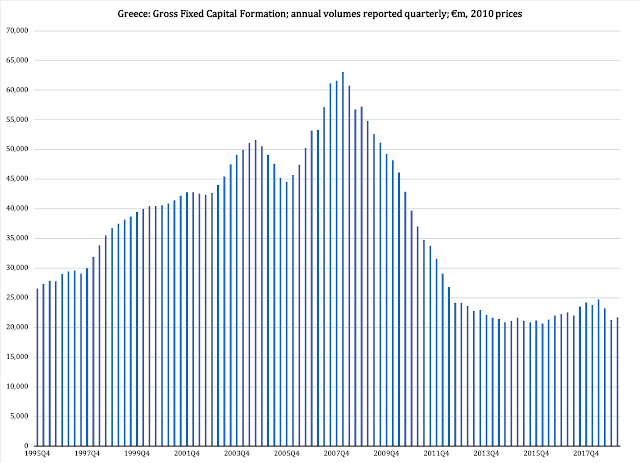 For every euro that businesses in Greece invested in 2008, they now invest 40 cents. This is nothing short of an economic disaster. It is a calamity-level destruction of the future of the Greek economy.

And nobody is talking about it.

Private consumption - a good indicator of the standard of living in a country - has been trapped at the same level where it was almost 20 years ago. That, however, does not account for the higher taxes people have to pay; if we take them into account as well, we are talking a standard-of-living loss of almost 25 years. Figure 3 explains: 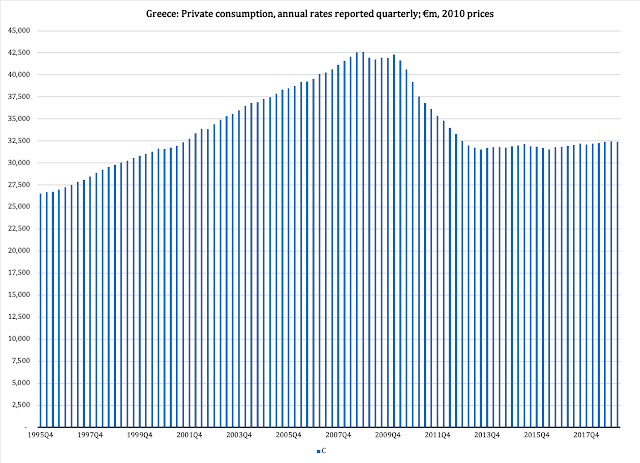 The collapse of economic activity has taken a big toll on the job market. The employment rate among 20-64-year-olds, which peaked at 66.3 percent in 2008, dropped to just a hair over 50 percent in 2013. By 2018 it was back up to 59.5 percent. That, however, is nothing compared to the devastation of employment among the youngest in the workforce, those aged 15-24. Their employment rate, which actually peaked already in 2004, fell from 27.5 percent to as little as 11.3 percent in 2013.

Yes: at the bottom of the Greek economic crisis, almost nine in ten young Greeks were unemployed.

That has changed a little bit, with the 2018 figure standing at 14 percent.

Another way to look at these numbers is to compare the number of people working at any point in time, per 100 individuals employed at an earlier point in time. In this case we go gack all the way to 1992, the start of Eurostat labor market data; for example, in the age group 20-64, for every 100 persons employed in the first quarter of 1992, five years later there were 105 persons employed.

At the peak of the growth cycle prior to the Great Recession, in the third quarter of 2008, this relative employment rate stood at 130. There were 30 percent more people working in the 20-64 age group than there were in Q1 of 1992. Then the economy collapsed, with employment returning to its 1992 levels in 2013.

A small recovery since then has only returned the total employed workforce to its mid-1990s level. In other words, the actual number of Greeks working is no higher than it was 20-25 years ago.

The Greek economic disaster is even more starkly present in the youth unemployment numbers: today there are fewer than 40 young Greeks working for every 100 who were employed in the mid-1990s: 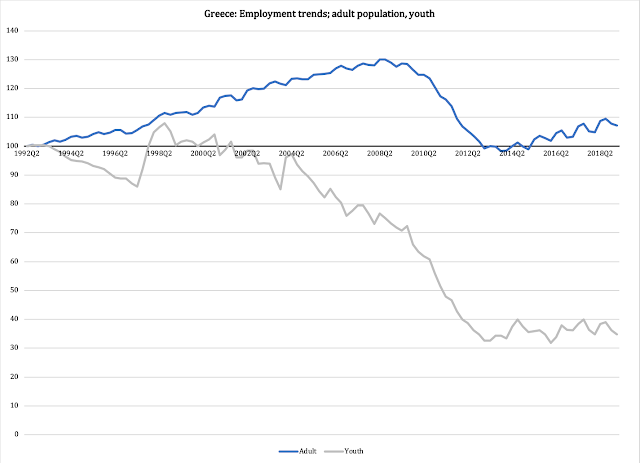 This plunge in employment shows up in the employment rates as well. As mentioned, fewer than 60 percent of the adult workforce is employed, and just over ten percent of young Greeks.

In addition to lower employment rates, the average work week has shortened by almost a full hour in just the past ten years, from 42.4 hours per week to 41.6 hours. This is no small decline: it means the permanent loss of some 18.6 percent of all jobs - or 876,000 jobs in an economy that, at its peak, employed 4.5 million people.

In the U.S. economy, this equals a loss of 28.8 million jobs - or the complete wipe-out of all retail jobs and all jobs in leisure and hospitality. We have never been even close to this kind of labor-market destruction: from 2008 to 2010 we lost 7.6 million jobs, a loss of 5.5 percent. Since then it has been upward again, with employment increasing every year. For example, to use the same reference year as for Greece in Figure 3, in 2018 there were 137 Americans working for every 100 Americans that worked in 1992.

The U.S. numbers are not spectacular - our workforce participation rate, while climbing, is not nearly as high as they would be if we made some intelligent reforms to our entitlement programs. However, the Greek numbers demonstrate with painful clarity what we have to look forward to if we ever fall into the same austerity-inflicted abyss of fiscal destruction that they did.

It is worth noting that the only sector of the Greek economy that is still growing is actually exports. As share of the Greek GDP it has increased from just over 20 percent before the Great Recession to 34 percent today. The reason is partly that foreign markets have increased demand for Greek export products, and partly that domestic economic activity - consumption, government spending and business investments - has not recovered from its collapse.

From a national-accounts viewpoint, there is even a bit more good news in Greek foreign trade. Due to the implosion of the domestic economy, imports have taken a big tumble. Figure 5 shows how it fell from its pre-recession peak: 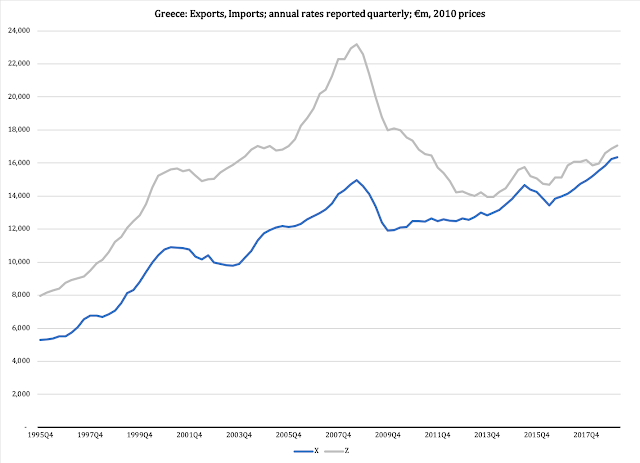 With imports now almost aligned with exports, Greece has minimized its foreign-trade deficit. This elevates GDP: since imported products are produced in other countries, they do not add to GDP. By contrast, exports add to our GDP even if it is sold to buyers overseas. When imports exceed exports, GDP is reduced by the same amount; when the trade balance is in surplus, GDP increases by that amount.

That said, it is important to note that when a country's exports increase but its domestic spending stands still, it is not really increasing its standard of living. A trade surplus means more income for people in the country, but when that income does not make its way into more consumer spending and more business investments, it has not made a difference for the better. This is the situation in Greece, but it is worth mentioning that reliance on exports for growth is not unique to them. Europe generally relies heavily on exports to generate income that can be taxed and fund their welfare states.

We must not forget the Greek disaster. That country suffered enormously because of ill-conceived, arrogantly executed and catastrophically misguided austerity policies. Not only do the Greeks need help building their way back to prosperity (although I fear that a renowned political economist I know is right when he said "I don't think Greece is coming back") but we must also understand what happened there in order to avoid other countries plunging into the same dungeon of industrial poverty.
at August 14, 2019