Death of the Debt Ceiling: What Happens Now?

The bipartisan budget deal that Congress passed while packing for vacation is little more than a big blank check on future taxpayers. While mainstream comments zeroed in on more or less relevant details, Rand Paul took his fellow Senators to the woodshed:

This new spending agreement has not yet worked its way into official forecasts for the budget deficit, but it is safe to say that it will not improve either the job of the forecasters or the deficit outlook itself. The difficulties in predicting future deficits lies not just in the actual spending numbers, but also in the fact that Congress again decided to suspend the debt ceiling. They did this already last year, when together with suspending the debt ceiling they also killed the sequester and terminated the spending-control board in Medicare.

The sequester was a bad idea in itself, but at least it held back some of the worst budget excesses while in effect. The Medicare spending board was never active, but it represented an institutional ambition to at least have some controls on government outlays. When the debt ceiling is again "suspended", it is de facto killed. It will not come back again; Congress should stop the charade and simply admit that they have done away with it.

By now, nobody should remain in any doubt that the debt ceiling is dead and gone. From hereon, only four words will guide budget forecasting: all bets are off.

Still, we do need to put some numbers - any numbers - on future deficits. To do so, let us begin with a review of what the forecasts said before this budget deal. The two most authoritative ones are from the Congressional Budget Office (CBO) and the Office of Management and Budget (OMB).

This new budget deal allows for an increase of spending of approximately $78 billion in 2020 and $76 billion in 2021. This may not seem like much, but based on the latest budget outlook from the OMB it means a seven-percent increase in the deficit. If we extend the increase, percentage-wise, through 2024 the accumulated deficit increases by $342.1 billion.

Under the latest CBO forecast the total increase is marginally bigger. The CBO's deficit outlook is a little bit more moderate than the OMB's, but only for the next couple of years. Through 2024 the new two-year spending bill increases the deficit by eight percent under CBO's numbers. Assuming Congress keeps its spending at this percentage above what was predicted prior to the deal, they will rack up a total of $394.4 billion in more in debt through 2024.

Regardless of whether we use numbers from the OMB or the CBO, the predicted increase in deficits rests on the critical assumption that Congress does not do anything else to grow spending further. That, of course, is a tall order - and it is even taller if we look at the spending and deficit predictions made by the White House's own OMB prior to the budget deal. Table 1a reports the annual increases in total federal spending in the forecasts of, respectively, the OMB and the CBO:

Clearly, the OMB assumes that spending growth is going to taper off over the next five years. It is not exactly clear how this would happen; is there a hidden plan somewhere in the White House on how to convince Congress to actually show some restraint?

It is not a far-fetched suspicion that the OMB's numbers are skewed to make the budget deficit shrink in their forecasts. This impression is reinforced by the growth predictions that they make regarding tax revenue:


The OMB's pronounced difference between growth in spending and revenue results in a stunningly consistent reduction of the budget deficit. Figure 1 reports the annual deficit, per latest forecast, as a percentage of total federal spending; since the OMB's official predictions only run through 2024 (as opposed to the 2029 horizon for CBO forecasts) I have calculated an extension of their predictions:* 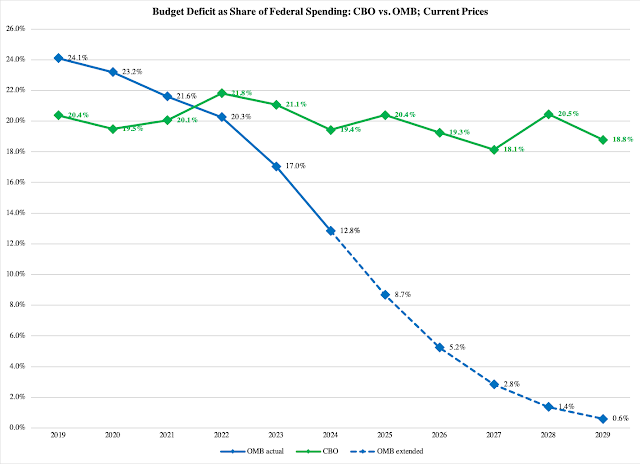 The question is what is going to happen to these two forecasts, once the new budget deal has been worked into the numbers from both the CBO and the OMB. A safe guess is that the OMB is going to have to move closer to the CBO forecast; not that the CBO is all that credible, but in this case they are undoubtedly closer to reality than the OMB.

It is not possible to assess to what extent either institution has factored in the removal of spending-cap measures, but it is at least reasonable to assume that neither has done that. It is not customary to take institutional structures into account in forecasting, but it is also not unheard of. If we assume that the debt ceiling is dead and gone - to take one example - we are very likely going to see a slow but steady rise in the percent of spending that is funded by deficits.

Until, that is, the point where the United States enters a fiscal crisis. When that happens, life for middle-class America is going to change, and change drastically.

*) The trajectory for the OMB extended forecast is calculated using the first- and second-order rates of change in the trajectory of their actual forecast. Due to the short range of the actual forecast, only four numbers were used in estimating the second-order. Furthermore, the two first were too disparate to warrant a stable extension. Therefore, the two last numbers were given decisive weight. This is a criticizable methodological approach, as it prioritizes stability in forecasting over accuracy in representation of reality. However, for the very limited purpose in this presentation, it is reasonable to make this trade-off. The reader should be advised, however, not to draw too far-reaching a conclusion from the extension of the OMB forecast, but see it only as an example of how the OMB could reach a point where the deficit is effectively gone. To do so, they would have to apply a forecasting method that one way or the other employed a similarly deterministic estimate of the budget deficit.
at August 08, 2019