The lack of fiscal sanity in Washington has now rendered all economic policies useless in the next recession. Tax cuts, interest-rate cuts, government spending - none of it will work. The consequences? Well...


In a great speech on the Senate Floor on June 3, Senator Rand Paul (R-KY) explained that the next recession is going to be very bad unless we get the federal budget deficit under control. It has been a very long time since I heard a politician of his prominence speak with such intelligence and candor about our economy.

Senator Paul effectively said what I have written books, scholarly articles, policy papers and blogs about for several years now.

The only problem with his speech is that reality is even more dire than the good Senator explained. The scenario he laid out, where the costs of the deficit rapidly overwhelm the federal budget, is more compressed than it is normally made out to be. This means that the risk for a rapidly escalating economic crisis is higher than it has was in the Great Recession a decade ago.

Back then, the federal budget was within a year, two at worst, of being balanced. The two-step tax cuts under President Bush Jr. had given the U.S. economy enough of an infusion to grow reasonably well (though nowhere near the impressive performance under President Clinton), bringing the budget deficit down to $160.7 billion. This was less than 40 percent of its peak in 2004 in the aftermath of the Millennium recession.

In other words, despite growing spending at more than six percent per year - defense and non-defense - President Bush managed to reduce the budget gap by more than 60 percent. The economy was in a growth period, significantly helped by his two-step tax reform.

In the same period of time, three years, the Obama administration had accomplished more than Bush accomplished: by 2014 the federal budget deficit had fallen 65.7 percent compared to its 2011 peak. This was the result of two factors, neither of which really something to brag about: the phase-out of the highly irresponsible stimulus package, and the perennial budget standoff between a Republican-led Congress and the Obama White House.

Continuing resolutions kept spending in check better than real legislation would have done.

There is another deficit metric that perhaps even better illustrates the state of fiscal (ir-)responsibility in Congress. At the depth of the Great Recession the federal government borrowed 40 cents of every dollar it spent. That share declined slowly, bottoming out in 2015 at 12 percent. Since then, though, deficit funding has increased again. Starting under Obama's last year in office, it has risen steadily under Trump and is now estimated to be at 24 percent.

The federal government is borrowing almost one quarter of every dollar it spends. In the middle of the strongest economic growth period in 20 years. Prior to the Great Recession, we had not seen this level of deficit funding of the budget since 1983 and the end of the stagflation era.

This massive deficit, both in actual dollars and as share of federal spending, prohibits the federal government from active fiscal-policy responses in the next recession. In 2007 the deficit paid for less than six percent of federal spending; in 2009 the deep recession and Obama's stimulus bill pushed the deficit to a 40-percent budget funding rate.

Nothing of this sort is even remotely possible in the next recession. It does not matter if the deficit increases because of more government spending or more tax cuts; the short-term effect will be a fast deficit surge that the federal government will have to fund. With a 20-25 percent deficit funding rate already in place at the height of the business cycle, Congress has forfeited the chance to counter the next recession with any kind of active fiscal policy.

To make matters worse, the irresponsible spending practices of our federal government has also neutralized monetary policy. This is a historically unique combination: in previous recessions there has been room for monetary stimulus when fiscal policy has been tapped out. Now, however, that is no longer the case. Explains the Wall Street Journal:

Central banks world-wide are poised to unleash some of the most aggressive monetary stimulus since the financial crisis a decade ago. But the circumstances are different now, with policies aimed more at breathing life into decade-old expansions rather than at averting an economic collapse. And it is unclear whether the central bankers’ depleted tools will be adequate. “We see the economy as being in a good place and we’re committed to using our tools to keep it there,” Federal Reserve Chairman Jerome Powell told Congress July 10, indicating the U.S. central bank is ready to cut interest rates later this month. The European Central Bank also sent a clear easing signal in the minutes of its June meeting, which said there was broad agreement among officials that they “needed to be ready and prepared” to reduce rates and resume asset purchases to provide more stimulus.

There is some room for rate cuts here in America, but the euro zone is already operating with negative rates. This is courtesy of their own version of Quantitative Easing and their determination to finance government debt across the currency area. As a result, the cost of borrowing money for the highest credit-rated euro-zone governments has plummeted into negative territory: 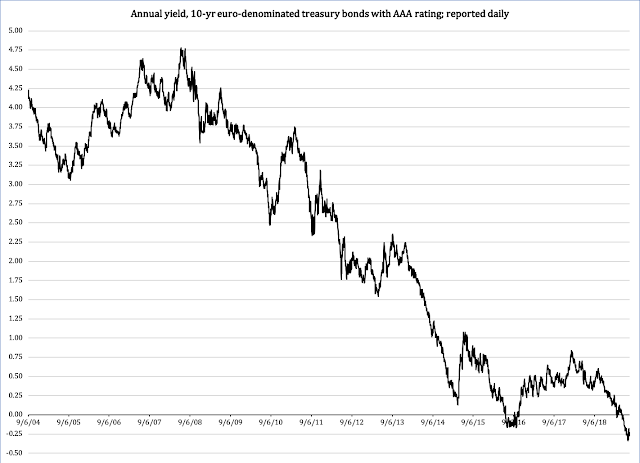 The depression of interest rates in Europe has gone so far now that even corporations whose debt is ranked as "speculative" (i.e., junk) can issue negative-yield bonds. As Tyler Durden over at ZeroHedge notes, this is an ominous sign of the end of a boom cycle.

Since interest rates have already been depressed to or below zero, there is no monetary stimulus to be had anymore. Negative interest rates mean two things that directly affect the ability of governments to use fiscal and monetary policy:

1. A negative overnight lending rate with a central bank means that commercial banks have to pay money to deposit excess funds. The more negative the rate goes, the closer the banks are pushed to the point where it is better for them to simply slush cash around out in the markets than to try to safe-deposit it. This leads to even more cash chasing stagnant spending and investment in a stalling economy, creating ripe conditions for monetarily driven inflation.
2. A negative rate on treasury bonds will still attract investors so long as the credit rating of the government in question remains high. However, when that government pushes more of its debt onto the market, and the only thing it has going for it is its stellar credit, the debt market will eventually react adversely and downgrade that debt. Since yields are already negative, that government will very rapidly lose its ability to borrow money.

Here is where the cash-slush and government's inability to borrow merge to light the fuse of monetary inflation:

a) The central banks cited in the Wall Street Journal article say that they want to undertake aggressive money-printing stimulus.
b) When the economy goes into a recession, or even before during a slow, weak growth period as is currently the case in Europe, there is more investment-ready capital floating around in the banking system than there are profitable investments to fund (and likewise consumer spending to lend to).
c) The only way for a central bank's stimulus-printing to go into the real sector of the economy is through government debt.

When the debt market has had enough of negative-yield treasury bonds, regardless of credit rating, central banks come riding in to the rescue. Monetizing deficits, they allow Europe's big welfare states to continue to spend as they already do.

Since welfare-state spending does not help the economy grow, but actually hamper growth, this will cause even more money to chase a stagnant or declining private sector.

To make matters worse, this is a scenario with global implications. Back to the Wall Street Journal article:

Already some central banks in the Asia-Pacific region have lowered rates this year, including Australia—which has cut rates twice to 1%—New Zealand, India, Malaysia and the Philippines. Central banks in Korea and Indonesia reduced rates last week, as did South Africa’s. ... Mr. Powell and other Fed officials have noted the decade long U.S. expansion remains solid but faces risks from slowing global growth and trade-policy uncertainty. Minutes of their June meeting pointed to signs of economic cooling, ... A rate cut would be an attempt to prevent the outlook from worsening.

Aside monetary inflation, the main risk with an even more aggressive monetary policy is that the new cash simply feeds more hot air into already over-speculated equity markets. The Journal again:

With policy rates already low in the U.S. and below zero in Japan and much of Europe, fresh stimulus could fuel destabilizing bubbles in housing and other assets.

Exactly. When you cannot earn any interest by buying debt, there are only two ways to invest profitably: to earn money on investments is by going after stock dividends or a cash-flow surplus in real estate; or to cash in on capital gains. If more money flow from debt markets to equity markets, even if it is for pursuit of dividends and real-estate cash flow, the inflow of money will exceed the income potential from those investments. By definition, this means that the investments are speculative, even if that is not the investor's actual motive.

Government has made both fiscal and monetary policy useless. Without adequate instruments for mitigating a downturn, the governments all over the industrialized world have neutered themselves when it comes to macroeconomic stability. Even worse: by still trying to use impotent monetary policy they actually contribute to the exact opposite: macroeconomic instability.

There is another important aspect of this problem to discuss, namely exactly how we ended up in a situation where both fiscal and monetary policy have been rendered useless. The superficial reason was discussed here, but there is a deeper problem that has not been given any attention in the literature. We will get back to it soon.
at July 23, 2019