Is TABOR Worth It?

Colorado pioneered the TABOR movement in 1992. Now the idea is gaining traction in Wyoming. But is it really a good idea?


The Taxpayers Bill of Rights in Colorado, known by its acronym TABOR, is widely praised among conservatives as an important instrument for stopping tax increases. Comparable in its policy intention to Proposition 13 in California back in 1978, the 1992 Colorado TABOR bill amended the state constitution in order to provide some protection for taxpayers against a spendoholic legislature.

Now TABOR is under fierce attack in Colorado, while interest in it is on the rise in Wyoming. Conservatives are lining up to defend TABOR, passionately claiming that the Centennial State would have been worse off without it.

The issue is going to play a big role in next year's election in Colorado, and probably in Wyoming as well. But is it really worth the effort to defend it in one state and get it passed in another?

To provide an answer to this question we need to put TABOR through a series of tests. There are three of them, as will be outlined below; underneath all of these tests is the postulate that those who propose TABOR need to make the case that it has been effective.

The reason for this postulate is simple. It takes quite a bit of time, money and political capital to get something like TABOR passed. As Colorado has proven, there is also a fight to be had even in defending it. If it has been successful, it should be easy to make the case that Colorado should keep it, but it would also be worth the while to try to get it passed in other states. To do that, though, it is incumbent upon the defenders of TABOR to prove its effectiveness.

It is not sufficient to claim, as some TABOR advocates to, that Colorado would have been worse without it. This is not a test worthy of any scientific method; it can in fact be used to prove anything. If, on the other hand, we can actually provide evidence that TABOR has made a difference for the better, then the "worse without" argument stands out in a different light.

Of the three tests of TABOR's effectiveness, two are related to government finances. I presented the the first test in an article last week, where I asked whether or not TABOR has actually had a visible effect on government spending. While TABOR was not formally written for this purpose, it is at least reasonable to expect that a fiscal mechanism vigorously defended by conservatives should have some sort of effect on spending.

My findings were discouraging: there is no evidence that TABOR has restrained government spending in Colorado.

This does not mean that TABOR is a lost cause. All it means is that there is now a bigger burden on the two remaining tests, the next of which has to do with government revenue.

Here, we find some evidence that TABOR has been effective. The evidence is not compelling, and not enough in itself to supersede the negative evidence from the spending side. However, it is clear enough to validate a third test (which we will get back to at the end of this article).

Since the Colorado TABOR only restricts revenue for the state government's General Fund, it is a given that it won't affect local government revenue. Furthermore, we can expect it to not have any restrictive effects on Other Funds in the state budget (and, obviously, not on Federal Funds). On the contrary, it is reasonable to expect that, all other things equal, Other Funds - which are paid for with different revenue than General Funds revenue - could have grown in Colorado under TABOR.

The first set of data we review is not to TABOR's favor, but also does not explicitly speak against it. The blue line represents the state share of total state-and-local government revenue in Colorado; for control purposes, a comparison is made with the same share for all 50 states together: 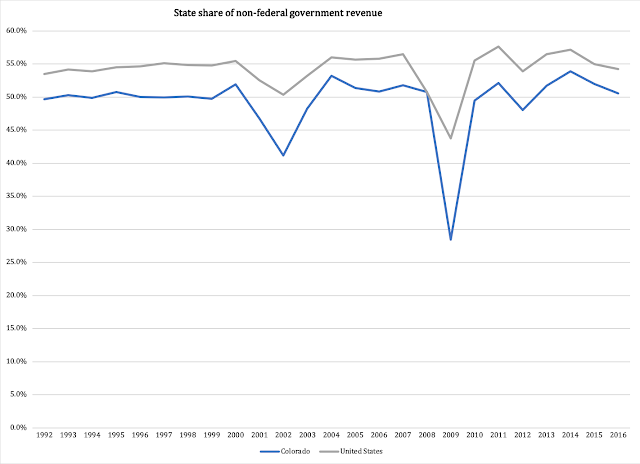 There is a marginal uptick in the 1990s in the state share for the U.S. trend line. This is not reflected in the Colorado numbers. Other than that, the changes that do occur in the state share in Colorado closely follow changes in the aggregate U.S. figure.

These numbers suggest two things. First, TABOR seems to have had a modest but visible effect on state revenue relative local government revenue. We would expect this given that TABOR does not apply to local governments;  we would also expect the effect to be just that - modest - since it only applies to the General Fund.

Secondly, the narrative often presented regarding TABOR, namely that it has been eroded by constant attacks from the left, seems to play out in these numbers. Assuming that they are correct - and we have no reason to believe they are wrong - the TABOR effect on Colorado spending may have disappeared as early as after the Millennium Recession.

The ability of a state government to transfer spending and revenue downward, so to speak, may differ from state to state. From a fiscal viewpoint the sign of such transfers is visible in intergovernmental funds, specifically state funds going into local government budgets. Figure 2 confirms what we saw in Figure 1: in Colorado, state-to-local intergovenmental funds as share of total spending by local governments, has actually declined. It was approximately 25 percent right after TABOR was passed and fell to somewhere between 20 and 22.5 percent, where it has remained. The U.S. figure has also declined, but not during the same period of time. This suggests that the Colorado decline is unique to the state; it is not immediately obvious how TABOR could have caused this, but it could be the result of some fiscal restraint by the state, following a more restrictive measure for tax increases. The state had to hold back spending somewhere and, ostensibly, chose to do so vs. local governments.

Again, this is a hypothesis based on the data, but it is a reasonable one: 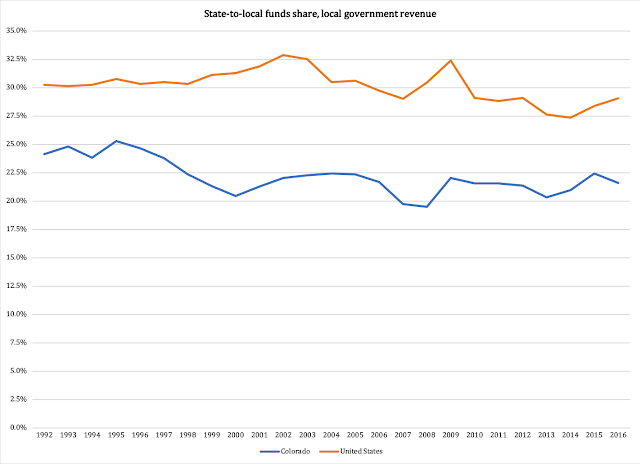 To get closer to TABOR's potential success, we will also review revenue data per capita; one of the features of TABOR is to tie government revenue to population growth. Here we find some numbers that are more encouraging: government revenue in Colorado exhibits the long-term trend you would expect. State revenue per capita grew notably slower during 1993-2002, than for the 50 states together.

At the same time, local-government revenue grew moderately faster in Colorado, again expectable since TABOR does not apply there. Furthermore, there is evidence in these numbers of what TABOR proponents have said about how the measure has been eroded over time. In fact, TABOR appears to have been entirely ineffective once the Centennial State entered its second TABOR decade, 2003-2012:

Looking at the actual per-capita revenue numbers, as Figure 3 explains we can actually see the TABOR effect. It appears as a widening gap between the two functions during the 1990s: 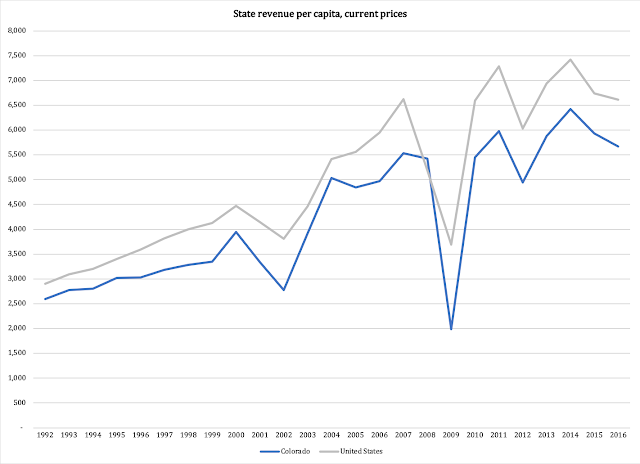 Predictably, for local governments Colorado does not stand out at all: 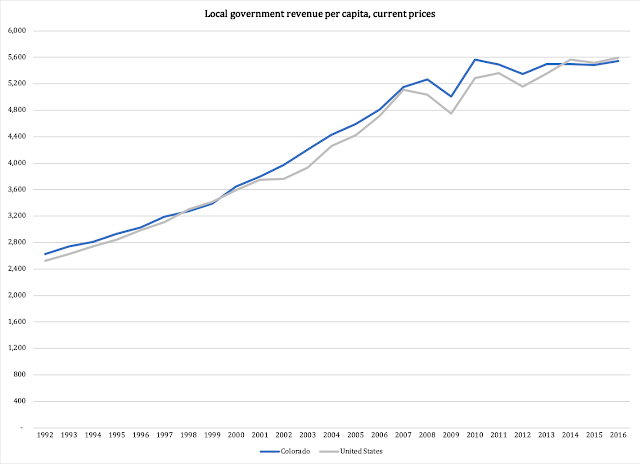 The revenue test of TABOR was the second fiscal test, the first being focused on government spending. While the first test was discouraging, this second test suggests that TABOR has been effective. Its impact on government revenue, even state revenue in isolation, is modest but visible, again logical given its limited application even in state spending.

In conclusion, the two fiscal tests do neither favors nor discourages the pursuit of TABOR in Wyoming. However, as mentioned before there is an evidence postulate underlying these tests: the burden of evidence is on those who suggest it is worth the while to spend considerable time, money and political effort on getting TABOR passed. Therefore, with the two fiscal tests being inconclusive the recommendation is to not pursue TABOR in other states.

The third test, however, could break in TABOR's favor. This is a test to establish whether or not it has actually become more difficult to pass tax hikes in Colorado. Plainly: out of every 100 legislative bills to raise taxes, how many did become law? If Colorado has a lower ratio of successful tax-hike bills than other states, then TABOR has definitely demonstrated its success. Due to limited resources, I will have to leave this test to TABOR proponents, but I will be happy to report their results.

Should such a test conclude in TABOR's favor, I will encourage introducing it in other states, with modifications to account for its current shortcomings.
at July 16, 2019