From Money Printing to Industrial Poverty

And the destruction of prosperity continues, courtesy of negative interest rates and unhinged government spending...


As I explained the other day, budget deficits fueled by the central banks monetizing efforts (printing money to buy treasuries) has rendered both monetary and fiscal policy useless in the next recession. However, the damage is greater than just neutering economic policy with regards to the business cycle: the practice of using the monetary printing presses to pay for excessive government spending is slowly destroying the very prosperity we all enjoy.

Bluntly: deficit monetization is pushing the entire Western world into the macroeconomic quagmire I defined in my 2014 book as a state of industrial poverty. No increases in standard of living, no new prospects on the future for the growing generations, no technological leaps in our daily lives...

This lifestyle is not unknown to us. It was what life was like in Eastern Europe under the Soviet era. We are pushing ourselves right into it by means of chronic deficits and unhinged money printing.

It is not hard to find culprits behind this. Immediately, Ben Bernanke comes to mind. With Quantitative Easing (QE) he effectively fused fiscal and monetary policy together in a way that flies in the face of everything students learn in macroeconomics in college. Especially if they read Bernanke's own excellent textbook (which I used when I taught macroeconomics).

Quantitative Easing, which also goes squarely against a good 40 years of central-bank policy doctrine, has torn down the bulwark between the two branches of economic policy: fiscal and monetary. This destruction, which sounds purely technical, is already proving to be very consequential for Europe and Japan. There, central banks have basically and entirely abandoned (or never even tried to commit to) the sound independence of monetary policy.

If the Federal Reserve returns to QE, the effects for the United States are going to be equally serious.

The barrier between fiscal and monetary policy matters for several important reasons, all of which cannot be covered in a single blog article. Since I am working on a piece for a peer-review journal on precisely this matter, this blog article will address the most crucial reason: the economic demotion of the private sector to a service unit for government.

Quantitative Easing constituted a paradigmatic shift, as it made the purchase of government debt by the central bank the main theme of monetary policy. Since government debt - or, to be strict, the annual deficit - is by definition a matter of fiscal policy, this tied all instruments for managing the money supply and interest rates to the fiscal needs of government.

A major consequence is a negative interest rate: the ECB has maintained a sub-zero overnight rate for bank deposits since 2015, slowly going more negative over time. Since this rate punishes banks for depositing excess funds with the central bank, it is an encouragement to them to lend that money to someone else.

In theory, that someone else is the private sector. If the overnight lending rate is negative with the central bank, the commercial banks will find it cheaper to lend it to households and businesses even if they do it at a zero interest rate. By means of this very cheap credit, businesses across Europe would go on an investment spree and thereby generate more growth.

Indisputably, this did not work. Since the euro zone began operating with negative interest rates, GDP growth has stalled a hair below two percent. As Figure 1 reports, the European economy is de facto trapped in a state of industrial poverty (indicated by the horizontal line): 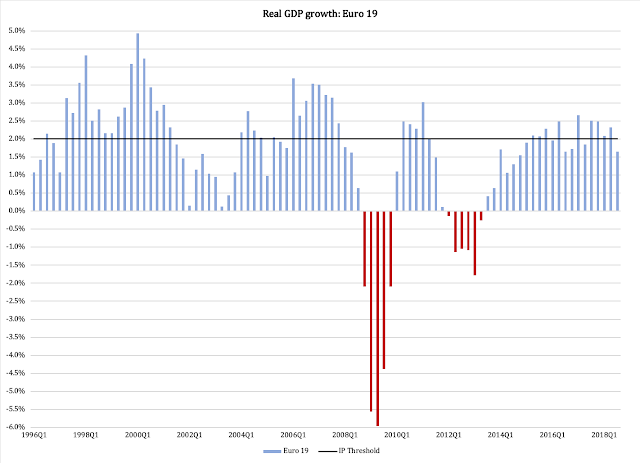 It is beginning to dawn on policy makers in Europe that QE has not worked. In a Wall Street Journal article on July 26 (p. A8, print edition) ECB president Mario Draghi admits that the economic outlook for the currency area "is getting worse and worse". He mentions manufacturing as a particularly troublesome industry, though as Figure 1 shows the slowdown is more serious than that. In the first quarter of this year - the latest for which Eurostat has published numbers - the euro-zone's GDP grew at only 1.05 percent on an annual, inflation-adjusted basis. This was down from:

If anything, the ECB's QE policies are having an adverse effect compared to the official theory behind it.

There is a good reason for this adverse effect. The real purpose behind QE is, as I explain in The Rise of Big Government, to provide governments with cheap loans. It has worked: governments all across the euro zone, from those with top-tier credit to Greece, have seen substantial reductions in their cost of borrowing.

At the same time, this has also meant that government has continued to deficit-spend - and maintain, even grow, its size relative the private sector. In Q1 2019 the combined budget deficit for the euro zone was the highest it has been in two years, falling from a small surplus early in 2018. Furthermore, the combined surpluses in the euro-zone countries in Q1 2018 were 75 cents to every euro of combined deficit; in Q1 2019 that balance had fallen to 62 cents. Furthermore, the surplus countries are entirely dominated by Germany; on the deficit side, France is seeing an unending erosion of its budget, Italy and Austria also have worsening deficits and Spain just posted its sixth quarter with a deficit in two years.

When monetary policy helps government spend, the restrictions of taxes on private-sector growth no longer matter. Euro-zone governments have maxed out their taxation ability, amending their budgets with monetized deficits. In 2008, taxes consumed 44.4 percent of the euro-zone GDP; in 2018 that share had grown to 46.3 percent. That is the third highest ratio ever recorded, beaten only by 2013 (46.8) and 2014 (46.7) when the euro zone was still struggling to get out of the Great Recession.

By 2018 the economy should have been back growing at something like 2.5-3 percent. In reality, as explained in Figure 1, euro-zone economic growth is not even strong enough to keep overall standard of living afloat (the IP threshold).

The reason is big government. I have in numerous articles on big government and slow growth; as an example, Figure 2 recaps data showing GDP growth in 31 European countries (left vertical axis) and the tax share of GDP (right vertical axis), for the period 1996 through 2017. The result is unmistakable: 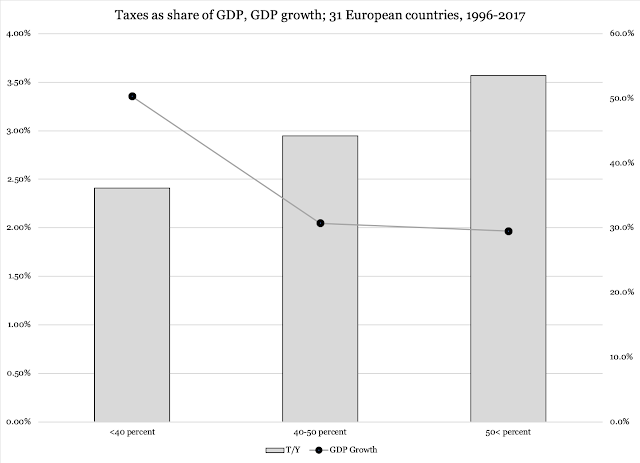 If you want reasonably good growth, keep government below 40 percent of GDP. That, however, will not happen so long as government can supplement taxes with dirt-cheap credit courtesy of the central bank. The slow growth that follows high taxes would normally take such a toll on government revenue that it was forced to reconsider its tax policy; now, it can continue to spend, and leave taxes intact (thus avoiding a political battle over tax cuts) with impunity.

The neutralization of the Laffer constraint on taxation is one major channel through which the ECB's deficit monetization is suppressing private-sector growth. Another channel has to do with the structure of the private capital stock. Back to the aforementioned Wall Street Journal article:

A 0.1 percentage-point interest-rate cut, which is being priced in by investors, "is nothing, there will be no impact, [former ECB chief economist Jurgen Stark] said. Meanwhile, a fresh round of bond purchases "will continue disturbing markets, and prices do not reflect the risk anymore"

This point applies to governments as well as to the private sector. Wasteful government spending adds to the weight that taxes put on the private sector, thus contributing to the growth-suppression effect. On the private-sector side, businesses that would not be able to finance investments and stay open under normal interest-rate conditions can now continue to operate. With a lower productivity than competitors with more modern capital, organization and products, they hold back growth yet have little to fear with abundant access to cheap credit.

The Wall Street Journal refers to this as the "zombie company" effect, a term worth using more often... Perhaps it is time to talk about "zombie governments" as well...

If the Federal Reserve gets back into Quantitative Easing, it will do the same harm to the U.S. economy as the ECB is doing to the euro zone. This would undo much of the industrial revival we have seen in the past couple of years. Since the Fed keeps interest rates notably higher here than the ECB's -0.4 percent we still have a way to go before we get stuck in the "zombie" zone, but the economic mechanisms are the same here as there. Once the Federal Reserve goes back down the QE path, only time will separate us from Europe.
at July 27, 2019