Kamala Harris thinks she can create Medicaid for All without raising taxes. Here is what that means in the real world. Brace yourself for third-world health care. If that, even.


Next year's election will be the most ideologically charged in decades. We said that under Obama, thinking that the left could not drift any farther out toward the edge of sanity than they had already done.

We were wrong. They could. They can. And they do. Yesterday, in Part 1 of this series on the Democrats' all-out socialist agenda, we discussed slave reparations. My conclusion was not quite what libertarians and conservatives would have expected - I replaced reparations with restitutions - but I nevertheless doubt that the left will even consider this more reasonable approach.

Reason? It does not create a permanent new entitlement program. Which is all they are about.

Today we turn our attention to the biggest fish in the muddy Democrat waters: single-payer health care. Specifically, we will take a look at the proposal from Senator Kamala Harris. She is going full force with Medicaid for All, claiming that most people won't have to pay a dime for it:

Sen. Kamala D. Harris of California said Tuesday that her vision for a “Medicare for All” program wouldn’t require a tax hike on middle-class Americans, and that her push requires a transition period of more than four years. That puts the 2020 presidential contender in line with advocates who say this sort of massive overhaul of the nation’s health care system would actually lower costs.

Of course they do. They are delusional. In a moment we will review some elementary health care data showing how it is impossible to run a single-payer system - which is what Medicaid for All is - without raising taxes.

Actually, it is not impossible. There is a way out. Back to that in just a bit. For now, here is more from Kamala Harris, again courtesy of the Washington Times:

“I am not prepared to engage in a middle-class tax hike,” Ms. Harris said in an interview with CNN Tuesday. Asked whether people would no longer be able to carry private insurance, Ms. Harris suggested that would be the case. “They would eventually be covered under Medicare for All, and they would still see their doctor,” she said, adding that she believes it would take longer than four-year transition period under the Sanders plan.

When a Democrat says "if you like your doctor, you can keep your doctor" you should run for the exit.

Mr. Sanders has pegged the cost of his Medicare for All plan at $30 trillion to $40 trillion over 10 years. He has said he would have to raise taxes on the middle class to pay for his bill, and that it would take four years to transition into the program. “People who have health care under Medicare for All will have no premiums, no deductibles, no co-payments, no out-of-pocket expenses,” Mr. Sanders said in the first debate.

Pressed on whether she believes it can be done without that sort of tax hike, Ms. Harris said, “without a middle-class tax hike, yes, yes.” “There are ways to pay for it, also understanding the investment that we are going to be making in a way that is going to reap great benefits in terms of other costs,” she said.

Here we go again. The left never ceases to play that string: let us spend more of your money now and you will get great benefits... in the long run... Down in Venezuela they are still waiting for the long-term benefits from their massive government.

Before we get to the data, let us just stop by Axios.com where Drew Altman from the Kaiser Family Foundation laments the demise of Medicaid under Medicaid for All. The current Medicaid program is run jointly by the states and the federal government, allowing for some minor variations within the tight confinements of federal funding dictates. Those variations would be lost, he notes, as an all-federal Medicaid for All program

would all but eliminate states’ role in health care, where they have been leaders not just in providing coverage, but also driving efficiency and testing new models of care. Those reforms — and the idea of states as laboratories of reform — would pretty much disappear, and the balance of federalism in health would fundamentally change. 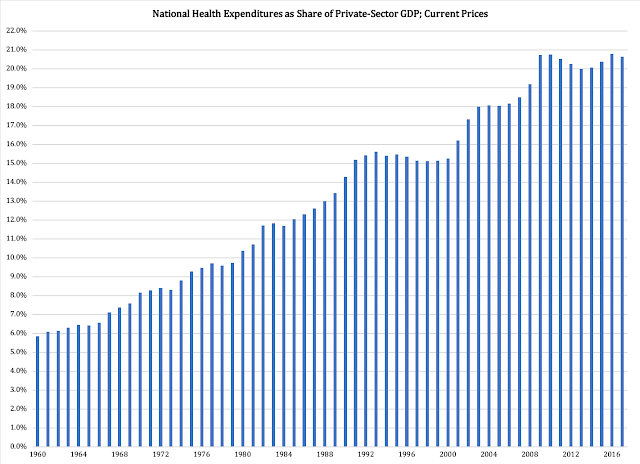 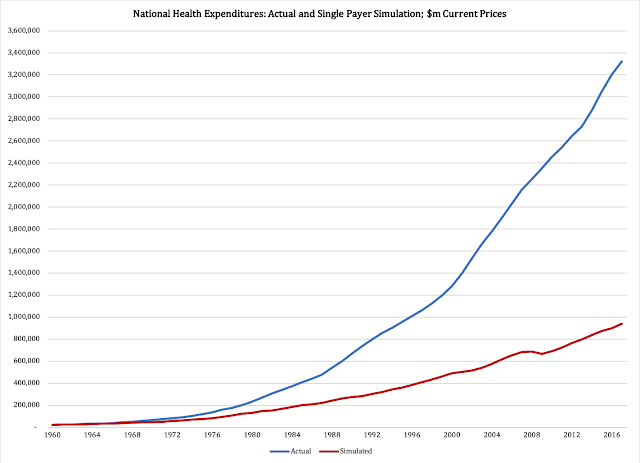 Health-care socialists will contend that they can make up the difference with savings in administration and bulk purchases of medical equipment and prescription drugs. Again, though, they are out of touch with reality. Starting with administration costs, here is how they break down together with other parts of our national health care expenditures: 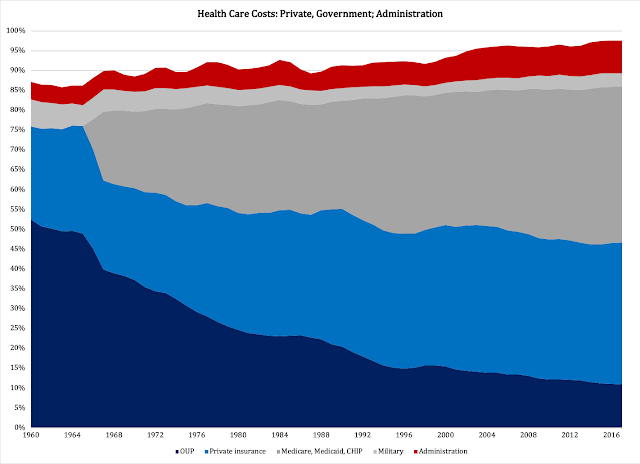 If we add up Out-of-Pocket costs (OUP), private insurance and all government programs, we account for approximately 90 percent of total health are expenditures. In other words, these are the expenses that actually pay for medical services. Administration - the red band in Figure 3 - was 8.3 percent of total expenditures in 2017.

Figure 3 omits research and costs for facilities, which together make up the final few percent on top of the items accounted for.

Bluntly: even if we eliminate all health-care administration (an impossibility) it will only close about one eighth of the gap between actual health care costs and the single-payer level we saw in Figure 2. Kamala Harris and her Medicaid-for-All buddies are going to have to look somewhere else for a lot of money.

But what about bulk purchases of prescription drugs? Let's take a look. 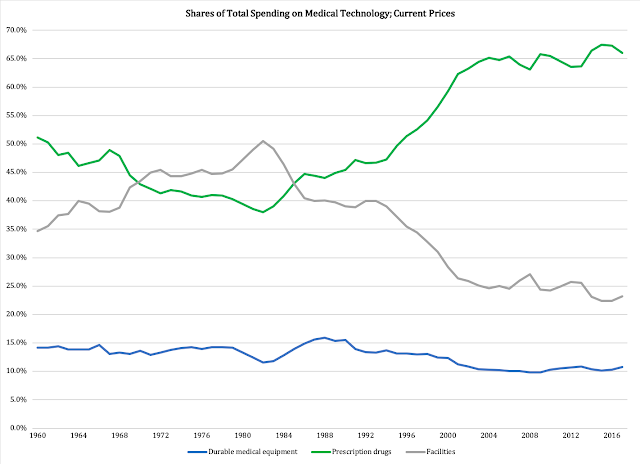 In fact, as Figure 5 explains the cost of all medical technology together has outpaced private-sector GDP for almost all the period we are reviewing here:

Figure 5
ave to deny access to health care for 182 million Americans - or;