The State of State Economic Freedom


It is easy to get a conservative politician to make a commitment to economic freedom. The mantra that government should leave people and businesses alone is widespread to the point of being axiomatic.

This is good, of course, but the problem is that far too many of the conservatives hail from the Great State of Hypocrisy, pay lip service to economic freedom and then turn around and legislate in the exact opposite direction. More often than not, the theory of economic freedom is confined to just that - a theory. That is unfortunate; as this article shows, there are substantial gains to be made from the advancement of economic freedom.

One of the complicating aspects of analyzing economic freedom is to quantify it in such a way that its status can be compared to macroeconomic performance. The index consists of a number of variables, organized into three categories:
Where appropriate, the variables are measured against personal income, as in "government spending as share of personal income" within a state. Measured on a scale from 0 to 10, the Index then ranks states based on how they perform both within each category and in the aggregate.

To get an idea of how an economy can benefit from economic freedom, we compare the freedom-index numbers to GDP growth, specifically private-sector GDP. Annual state-level GDP data is available from the Bureau of Economic Analysis back to 1997, meaning that we have GDP growth numbers from 1998 on. Since the most recent year from the Index of Economic Freedom is 2016 (it goes all the way back to 1981), this means we have 19 years for which data is available for both variables. Multiplied by 50 states, this gives us 950 pairs of observations of how economic freedom correlates with private-sector GDP growth. Figure 1 reports these findings, broken down by deciles with 95 pairs in each decile: 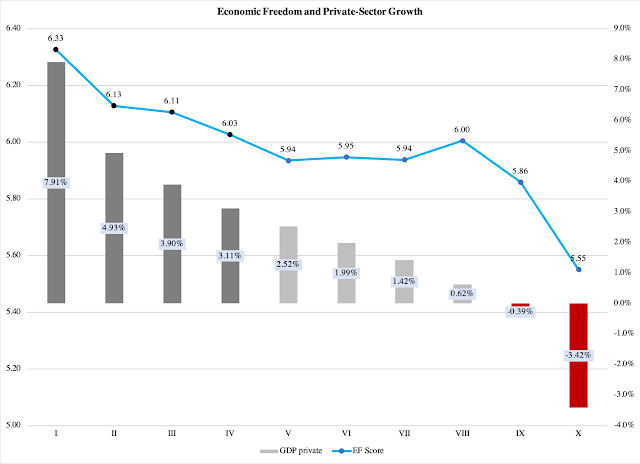 In other words, the private sector thrives when economic freedom is strong.* However, to get a better idea of what exactly a state legislature and a governor can do to advance economic freedom, we need to dig into the details behind the EF Score in Figure 1.

Starting from the aggregate level, with an average freedom score for all the 50 states, Figure 2 gives us an idea of how the score has evolved based on the first category, namely government spending as share of personal income. This category consists of three variables:
Since the start of the Index of Economic Freedom in 1981, in two of these three variables economic freedom has deteriorated. Figure 2 explains: 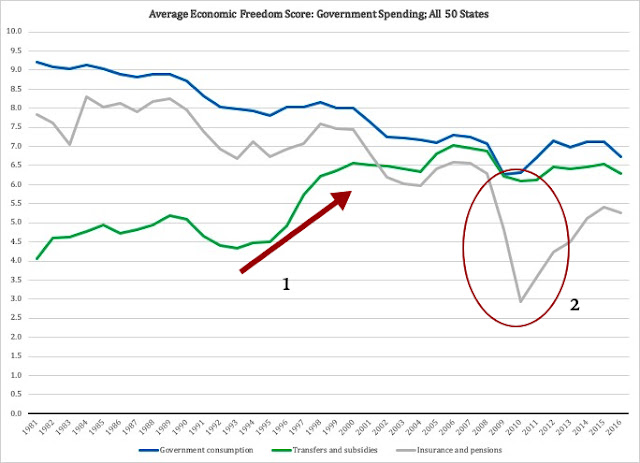 The decline in freedom score has been even more pronounced in insurance and pensions spending: from 7.9 in the '80s to 4.4 in the '10s. The reason for this significant decline is ostensibly the long-term rise in defined-benefit government pension obligations, which in turn is a function of the rise, relative the private sector, in the number and the compensation of government workers. (We can see the rise in employment in the blue function in Figure 3 below.)

Only one of the variables in this category shows some improvement, namely that of transfers and subsidies. Rising from 4.7 in the 1980s to a contemporary 6.3, this variable reflects an improvement in the independence among Americans in general of cash handouts from government. However - and this is a big point - the entirety of that improvement took place in the 1990s. It is one of two notable episodes illustrated in Figure 2:

1. The sharp rise in economic freedom derived from transfers and subsidies correlates exceptionally well with the PRWORA welfare reform during the Clinton presidency. It is, in fact, the only period during which this variable exhibited any gain in economic freedom. There was even a small decline in the freedom index from the 2000s to the 2010s (at least as far as this decade is covered here), a decline that is ostensibly attributable to the deep Great Recession and exceptionally slow economic recovery.
2. Economic freedom deteriorated sharply in the insurance-and-pensions variable as the Great Recession broke out. The explosion in unemployment, from 4.6 percent in 2007 to 9.6 in 2010, put serious stress on the unemployment insurance system. As the economy slowly began to recover the freedom score improved, only to apparently resume its long-term decline in 2015.

With government spending contributing to a deterioration of economic freedom, it is uplifting to see that there have been improvements - even substantial ones - in the labor-market freedom category. The three variables here are:

The most startling improvement is in the minimum-wage variable. Here, the economic-freedom score has improved from 1.6 in the 1980s to 5.6 in the 2010s. Relatively speaking the score in the union variable has gone up even more, but as the grey and green functions in Figure 3 report, the union variable started out higher: 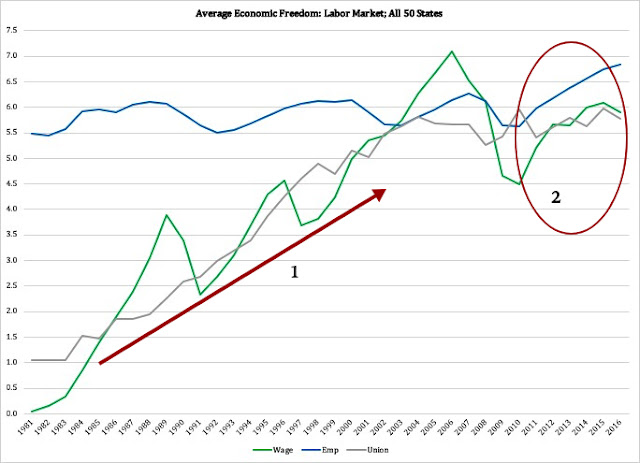 The remarkable improvement in the minimum-wage variable is measured by the Fraser Institute in a way that, actually, is rather intelligent. The regulated wage is compared to the productivity in the industries where the wage is relevant; the higher the wage is compared to productivity, the more the minimum wage restricts economic freedom:
Since the early 1980s the minimum wage has stagnated, giving the free market a chance to create more jobs at the lower end of the wage spectrum. In the other end, productivity has elevated market wages above the legally mandated minimum.

During the same period of time that minimum wages have loosened their grip on the labor market, union membership - or union density - has declined. Part of the reason for this is the proliferation of right-to-work legislation, another part the decline of heavily unionized industries and workplaces. For example, the auto industry in union-dominated states like Michigan declined under the heavy burden of union contracting, while car manufacturers who located production to southern, non-unionized states have thriven. As a result, the overall density of union membership has fallen.

In other words, as regards the numbers in Figure 3,

1. Economic freedom derived from the labor market increased in the first 20 years of the measured period. Overall, for all the 50 states economic freedom in the labor-market category improved from 3.0 in the '80s to 4.4 in the '90s and 5.8 in the 2000s. So far into the '10s the score has only crept up marginally, to 5.9.
2. It is interesting to note that despite the stagnation of the freedom score in the wage and union variables, it has seen some increase in the government-employment variable. It is not entirely clear why this has happened, as there have been no structural reforms to the size and role of government anywhere in the U.S. economy. A viable hypothesis, though, is that states and local governments capped employment after the Great Recession took a major toll on their finances.

The last category of variables, taxes, exhibits notable stability. A slow uptick in the score from the marginal income tax rate is the only long-term contribution to economic freedom; viewed from the opposite angle, this also means that there has been no major deterioration in economic freedom here.

There is one exception, marked by "1" below: 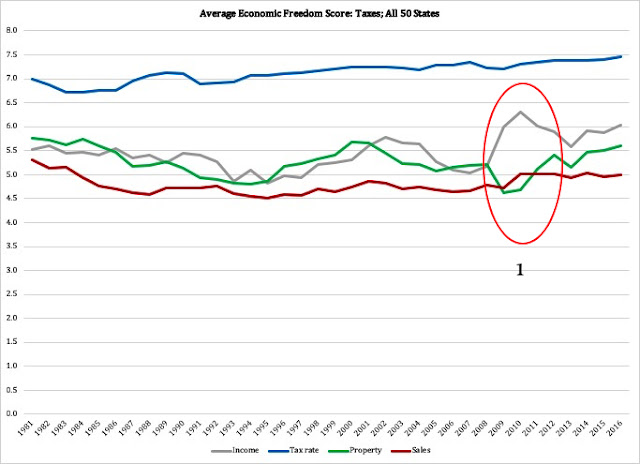 Once the recovery slowly got under way, the reverse effects showed up in both these variables.

In the aggregate, economic freedom of the U.S. states has increased in the past four decades. It averaged 5.3 in the '80s, 5.5 in the '90s and 6.1 in the 2000s. Since then it has declined marginally, to 5.9; since we only have seven years of the '10s on record it is not entirely fair to compare it to previous decades. Still, the noticeable, and noteworthy, stagnation is cause for concern for those who cherish economic freedom.

Given the categories above, the stagnation appears to emanate from continuing expansion of government spending. Slight improvements in the other two categories have mitigated this trend, but it remains to be seen how that will play out in the future. States, like the federal government, face compelling fiscal challenges going forward. Watch out for tax hikes.

---
*) There is a methodological point to be made about the denominator in the index - personal income - and private-sector GDP, namely that the former depends on the latter. However, the dependency is limited by the fact that personal income includes income earned by government employees, while we only compare it to the private-sector part of GDP. Furthermore, any correlation that depends in part on such overlaps (technically, a limited case of measuring the same economic activity) is made moot by the fact that a decline in economic freedom through government spending is caused by an increase in government spending relative personal income. When this relative increase happens because government spending remains intact while personal income declines, the reason is in a deliberate decision by government to maintain spending in the face of a recession. This, in turn, is a fiscal-policy decision that explicitly deteriorates economic freedom - hence making it a relevant example of why economic freedom and private-sector GDP correlate the way they do in Figure 1.
at June 21, 2019