On Income Stagnation and Inequality, Part 1

The debate over income differences in America is uninformed and shallow. Let's do something about that...

The narrative about stagnant household incomes has been going around the debate over economic policy for a long time. There is some merit to it: over time, personal income grows largely on par with GDP, and with GDP barely reaching three percent at the very height of a long growth period, it is expectable that personal income is slow to move as well.

It is important, however, to keep in mind that not all personal income is the same. The stagnation originates in stagnant work-based earnings, while earnings from tax-paid transfers - entitlements - have increased. Today, transfers are about three times as important to the bottom line of the American family as they were in the 1960s (the start of the War on Poverty).

The third source of income is that which comes from investments. In the aggregate, this category is largely as important now as it was back in the mid-20th century, but it has shifted character. 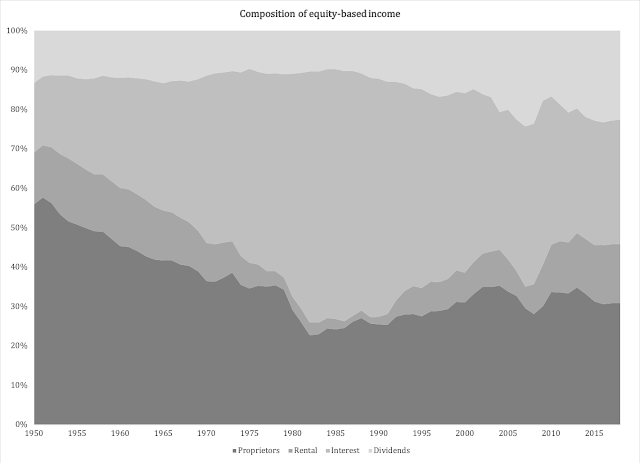 After a long rise of interest earnings, stock dividends started gaining ground in the 1980s. Over the past four decades they have climbed from ten percent of equity-based income to 22 percent in 2018. As share of total personal income dividends have risen from 2.7 percent 40 years ago to 6.6 percent today.

For sure, they are still not significant as a source of income, but the role of the stock market is more accurately represented if we add capital gains to the picture. To do so we need to turn to personal-income data published by the IRS. Their definition of adjusted gross income, AGI, is not perfectly comparable to personal income as defined by the Bureau of Economic Analysis, but if we deduct capital gains from AGI we have a close comparison.

When capital gains and dividends are added together, they are 13.7 percent of AGI. If we include interest income, both taxable and tax free, investments are responsible for 15.6 percent of AGI.

Expectably, investment-based income is concentrated to higher-earning households. This has been the case consistently over the past 25 years; Figure 2 reports dollars of work-based income for every $1 a household earns from investments (stocks, treasuries, other bonds, real estate). The ratio is then calculated by income group, producing a notably consistent "upslope". The lowest-income households appear to be relying on investments almost to the same extent as they rely on work - a balance they share with the very highest-earning taxpayers: 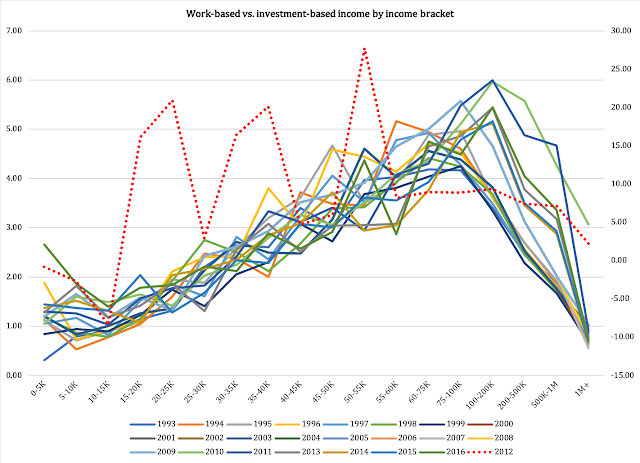 It is interesting to note how those who declare very little income, less than $5,000 per year, also report substantial losses on investments, i.e., negative capital gains. In fact, the role of interest earnings for low-income households is a significant matter in any conversation about differences in earnings: they tend to represent a higher share of household AGI for lower-earning taxpayers than for those with high incomes. For example, interest earnings are almost the same share of AGI for taxpayers reporting $5-10,000 AGI per year as dividends and capital gains together for those making more than $1 million (46.6 and 42 percent, respectively).

These are, of course, average numbers per tax return; it goes without saying that there is a substantial population of low-income earners who do not have any investment-based income at all. The point, instead, is that building equity is a way for families with incomes large and small to improve their finances.

To this point, it might be worth mentioning that tax-free interest is the second largest income source for the average taxpayer in every income group up to $200,000 (work-based income being the largest). For income earners in the higher groups capital gains take second place, with the exception of those making more than $1 million, where capital gains is the single largest source of income.

Since investment income is taxed differently than work-based income, one would expect the results in Figure 2 to be followed by a regressive distribution of the tax burden. That, however, is not the case. As Figure 3 explains, every income group up to $200,000 in annual taxable income contributes a larger share of total tax payments than their share of total taxable income. In other words, if a taxpayer makes ten percent of all taxable income and pays ten percent of all taxes, his income group is represented by a "1" below; when the ratio is larger than one, the tax share is disproportionately high and vice versa: 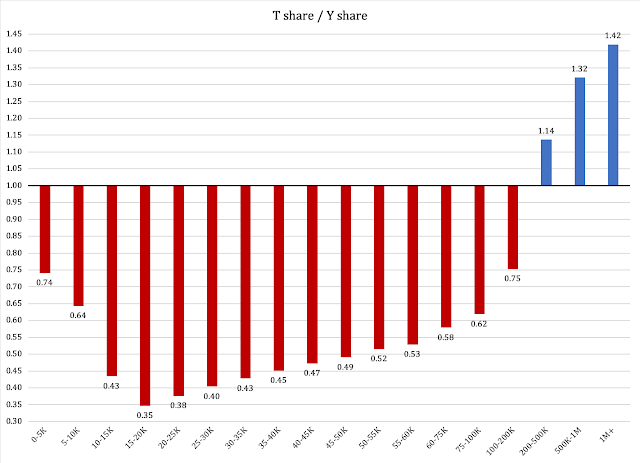 As mentioned, there are important implications in these numbers for policies aimed at redistributing household income. We will return to those implications in a later article. For now, let us note that the issue of income differences - also referred to as income inequality - is far more complicated than it is made out to be in the public debate.
---
*) The year 2012 produced highly deviating numbers, which is why this particular year is reported separately. It is represented by the dotted line and accounted for in the right vertical axis. All other years followed a notably similar pattern.
at June 14, 2019