The European economy is overall in a long-term state of stagnation, bordering industrial poverty. But there are exceptions, with Hungary as the strongest among them. Their economy is running away from the rest of Europe.

Conventional wisdom says that Germany is the economic engine of Europe. In terms of size, this is certainly true: in the fourth quarter of 2018 the German economy accounted for 20 percent of the GDP for the 28-state EU and 27.5 percent of the euro area.* However, when it comes to economic growth, Europe's engine is in the outer rim, specifically in the east. Figure 1 reports average annual growth over the past four years: 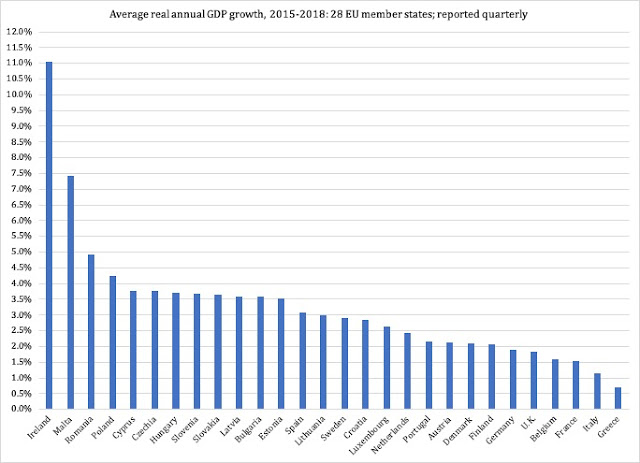 With Romania, Poland, the Czech Republic, Hungary, Slovenia, Slovakia and Latvia all in the top ten, eastern Europe is beating the west by a big margin.

The real success story is Hungary. In the past two years the Hungarian economy has exceeded four percent annual growth seven out of eight quarters; the eighth quarter the growth rate was 3.5 percent. By comparison, the German economy reached 3.4 percent in Q1 of 2017, but has only mustered an average of 1.6 percent since then. In fact, Germany's GDP growth even fell below one percent in two quarters.

Worse still for Europe's largest economy is this disturbing trend:

While Germany is grinding to a halt, the same numbers for the Hungarian economy are, respectively: 4.9 percent, 5.1 percent, 5.1 percent and 5.3 percent. In other words, Hungary is not only eating Germany's lunch, but the gap between the two is growing.

Even more impressive is where the Hungarian growth is coming from. Table 1 reports Q1 2019 GDP growth for 19 EU member states. These are the countries for which Eurostat has published numbers for the first quarter of 2019; the rankings will change when we have numbers for the remaining nine EU states, but so far Hungary is running away with it:

It is a sign of strength and considerable economic health that Hungary's growth has a broad base. Not only does it lead in GDP growth overall, but it is at the top for

It is another sign of strength that government spending is only growing at a moderate 2.17 percent.

They have also had a trade surplus for the past ten years.

The widespread growth of the Hungarian economy becomes even more impressive when compared to the composition of growth in western EU states. Germany, again, has its strength only in business investments, but their 3.25 percent growth is outright pathetic next to Hungary. Denmark, Finland and Sweden all get the bulk of their growth from exports, with little to nothing happening domestically. In fact, in Sweden the private sector is even declining, with both consumption and investments shrinking. It is only thanks to exports growth that the country's GDP is still growing.

On top of the stunning fact that east is outpacing west in the EU, seven of the top eight are former communist dictatorships.

We will have to update these numbers when Eurostat has published first-quarter 2019 GDP numbers for all 28 member states. Hungary may still be in the top, although the Irish will probably give them a run for the gold medal. Until then, though: