Three images of the European economy.


Several blog readers have expressed surprise at my findings in yesterday's article, where I reported on how Hungary is currently leading Europe in economic growth. I was also surprised at the numbers I found, so I decided to take a closer look at the Hungarian economy. As I explained yesterday, its strength cuts across the board, from private consumption through capital formation to exports - in each of them beating every other EU member state for which we have Q1 2019 data - but the one category where they really stand out is capital formation.

Or business investments are they are also referred to.

Therefore, I decided to dive into more detail to see what is actually happening in Hungary - and the results are, again, quite interesting. A disaggregation of capital formation into the standard categories, residential construction, non-residential construction, machinery and equipment, and intellectual property products, tells us two things about the Hungarian economy:

a) Capital formation is volatile, but
b) It is also growing along a positive trend and across the board.

For comparison, I looked at Germany, the largest economy in the EU, and Sweden, the most export-dependent country in Europe. The dependency on exports is relevant because Europe, unlike the United States, is heavily dependent on foreign trade. Even when that trade happens between European countries, its final absorption depends on growth in the same way as extra-EU exports. In other words, by comparing capital formation in Hungary to that a heavily export-dependent economy we get an idea of how much of the Hungarian economic strength could be a reflection of global, or at least European economic strength.

Sweden is also interesting because it, like Hungary, has stayed out of the euro zone.

To begin with, let us look at the long-term trend in total, gross fixed capital formation for these three economies: 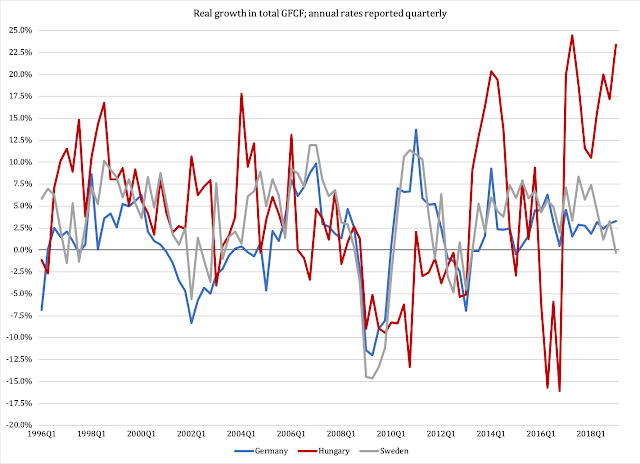 Here, Hungarian capital formation exhibits a rate of volatility that is not present in either the German or the Swedish equivalents. The first reaction to the Hungarian numbers would, logically, be that the average growth rate is probably not much to write home about - at least not compared to the more stable trends in Germany and Sweden.

To control for that, here are the average annual growth numbers, again reported quarterly, for the past eight years:

In other words, despite the volatility the Hungarian economy still outperforms both Germany and Sweden. Notably, the Swedish economy is experiencing a precipitous turn for the worse, a trend we will keep an eye on as we continue.

Breaking down by category, here are the numbers for residential construction: 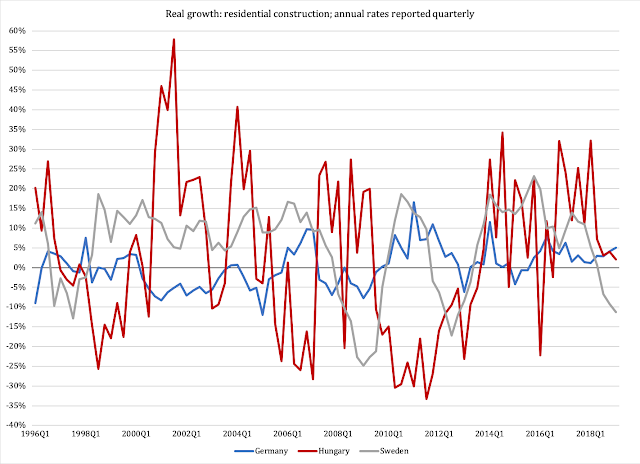 Again, Hungary has recently outperformed the other two, with an 11.5-percent four-year average compared to eight percent in Sweden and only 3.1 percent in Germany. However they did not do as well over the past eight years:


Here, the Swedish economy stands out as a "Hungarian mirror": Swedish residential construction has been declining for three quarters straight, and the decline has even accelerated. In Q3 2018 it was -6.7 percent, then -9.2 percent in Q4 of last year, only to drop further to -11.3 percent in Q1 of this year.

Figure 3, then, reports investments in non-residential structures, a category of major importance for the assessment of business confidence: 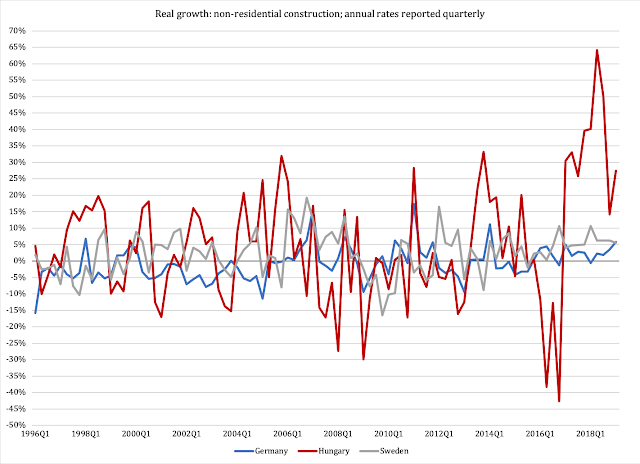 Over the past eight years:
Given the slump in Hungarian capital formation around the Great Recession, and the volatility since then, its eight-year average is frankly impressive. The volatility has increased in recent years, although the four-year average of 14.9 percent is three times the Swedish number and almost ten times better than Germany.

The next category is machinery and equipment, which covers everything a business needs in terms of robots for manufacturing, tools, vehicles, computers, telephones, power generators... the list is almost endless. So long as it is a piece of equipment needed for business activities, it counts under this category. 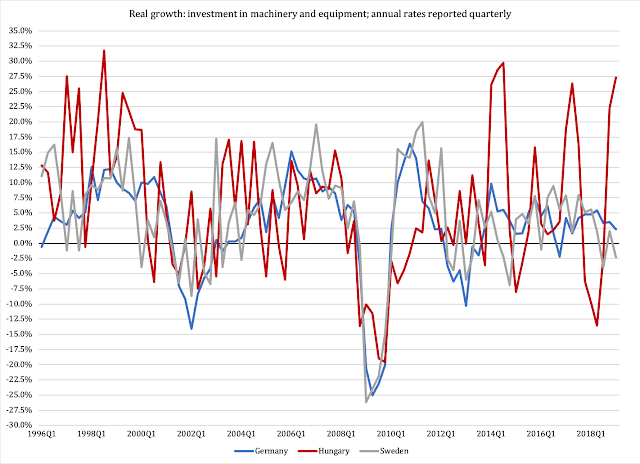 Eight year averages...
...again suggest that the volatility in Hungarian capital formation is coupled with a strong trend.

At the same time, the Swedish economy again exhibits signs of weakness. Investments in machinery and equipment have declined in two of the last three quarters. This is not a new trend in itself, but signs of worry that we will take a closer look at in a moment. 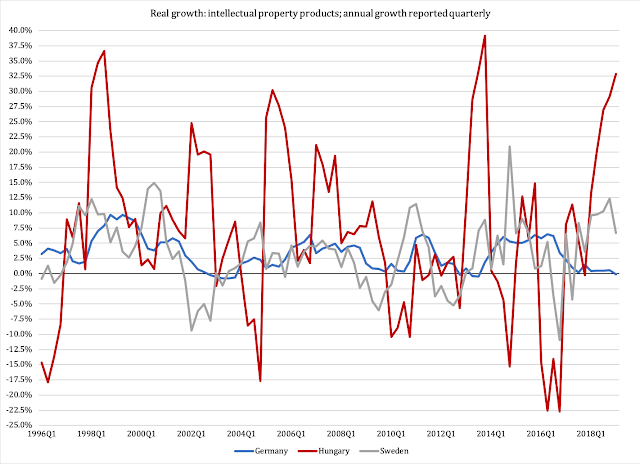 While Hungary again performs strongly, the Germany economy exhibits stands out in the other direction. In the past two years German business purchases of intellectual property products have remained flat; since this category includes computer software, the stagnation in this category raises some pertinent questions about the German economy.

This is perhaps the strongest category for the Swedish economy, but it still has not been able to match Hungary over the past eight years:
The bottom line is that while Hungary exhibits a somewhat unusual volatility in capital formation, there is strong and broadly based confidence among businesses in the country's economic future. We do not see the same confidence in Germany, and definitely not in Sweden.

Returning to the machinery-and-equipment category, a good way to measure where businesses are in general in terms of future planning, is to compare the timing of investments in non-residential structures and investments in machinery and equipment. The latter logically precedes the former - you need a place to put your machines and equipment - but in a healthy economy the two should be moving in a counter-cyclical pattern. 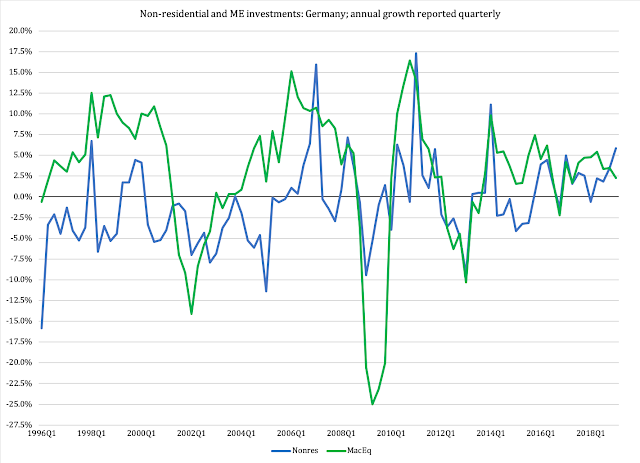 After a slump in structural investments in the years around the turn of the Millennium, after the minting of the euro German businesses started filling "what they had" with machinery and equipment. Gradually, these two variables have fallen into a counter-cyclical pattern that is a bit more pronounced in the last few years. 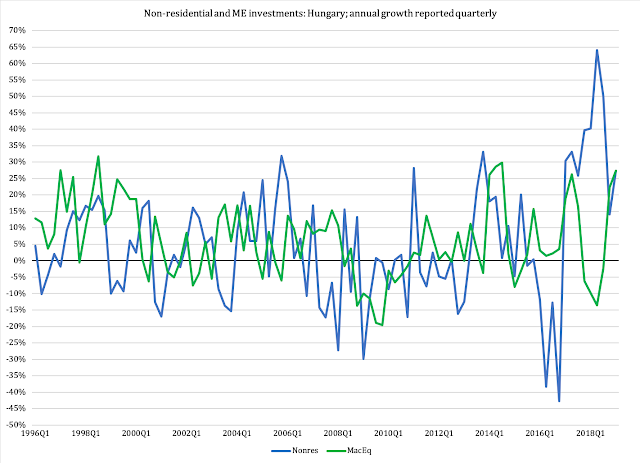 The Hungarian economy exhibits an even stronger counter-cyclical growth pattern than the German economy does. The volatility is still noticeable and a small reason to be a bit apprehensive. Still, Hungary again performs strongly and stands out as energetic for being a European economy. 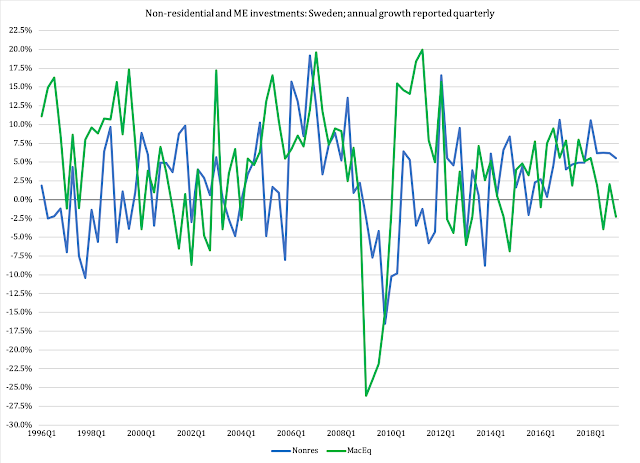 Here, again, the counter-cyclical pattern is present. However, it is broken lately, with a decline in ME investments paired with moderate growth in structural investments.

This is a somewhat puzzling combination that does not appear to be a counter-cycle of the usual kind. Rather, it seems to indicate that businesses are cutting investment costs in shorter-term accounts where they can more easily pick it up later, as opposed to investment in structures that require longer-term commitments.

While this does not signal a recession, it does suggest increasing uncertainty as to the near-to-mid term future of the Swedish economy. This again goes back to my previous note about the Swedish Riksbank: its refusal to raise interest rates and stave off a currency crisis could very well have resulted in loss of confidence among businesses. This loss of confidence has translated into increased uncertainty, exhibiting itself in a break in the structure-ME counter cycle.

The data reviewed here suggests that Hungary, despite volatility in capital formation, has solid substance behind its GDP growth. Germany is not only statistically but institutionally and - apparently - psychologically the definition of a stagnant Europe. Sweden is Hungary's mirror image, showing signs that a risk-averse investor should take seriously. If I were investing my own money, I would pull them out of Sweden until the macroeconomic variables show substantial improvement.

Again, congratulations to Hungary on a strong economy. It takes hard work to do this well in Europe.
at June 05, 2019