Proponents of Mad Money Trashing, MMT, can often sound informed, educated and analytical. They can even make it sound like MMT is the magic wand that can finally make socialism work. In reality, their entire "theory" is like that old Trojan horse: looks impressive, but hidden inside is the same ugly old socialism that has been wreaking havoc across the globe for a hundred years.

I have written several articles about the latest leftist darling: Modern Monetary Theory. As a theory it is surprisingly shallow - basically an accounting exercise resembling the card tricks your scotch-loaded uncle used to do to impress you when you were a kid - but in its application to real-world public policy it has deep, lasting effects that we should all be very afraid of.

Modern Monetary Theory is a path to endless government and a means to advance socialism. It is even being proposed by the United Nations as an instrument for global totalitarianism.

The core of the MMT is the idea that government can print as much money as it wants to, and nobody will ever have to worry again. Not about filling up their car, not about hyperinflation. In fact, if you look at how MMT is being sold politically by such fine contributors as Stephanie Kelton, Senator Bernie Sanders' former economic advisor, you would even think that MMT is indeed the magic wand that socialists desperately searched for all last century - killing hundreds of millions of people while doing it.

Kelton is not the only MMT advocate out there. Far from it. One of its core proponents is Randy Wray, an economics professor formerly with University of Missouri, Kansas City (together with Kelton) and now with the Levy Economics Institute and Bard College in upstate New York. In the Spring 2019 edition of American Affairs, Wray explains why the U.S. government should stop worrying and fall in love with money printing.

Wray's approach is different than what we usually hear from MMTers in the public arena. Instead of bringing a wooden horse filled with gifts, he explains why we should let the horse in the door in the first place. Wray's specialty is monetary economics, a field he normally has good command of, and a well-established Post Keynesian (a theoretical tradition I myself "grew up" in and still hold in high regard). Unfortunately, in his American Affairs piece Wray abandons his usual analytical sharpness and spends an inordinate amount of time showing off his command of economic accounting definitions.

This is not unintentional. On the contrary, MMT proponents rarely if ever discuss real macroeconomics. The entire pitch to sell MMT as the holy grail of socialism is actually centered around some simple accounting identities. Most basic among them is the one that Kelton often makes, namely that one man's debt is another man's asset. If government sells a treasury bond, the person who buys it owns it and therefore nothing has really happened in the economy. Debt is not a problem because when -1 is balanced with +1 it all works out to zero.

It escapes me how you can need a Ph.D. in economics to make this argument, but be that as it may. Randy Wray is a bit more sophisticated in his accounting-card trickery. His pitch is fundamentally the same, yet elevated to a global level: government deficits, he says, are always balanced out by someone else's assets, either domestic or foreign.

Bluntly: when government sells a treasury bond, either someone in America buys it or someone in another country buys it. Either way, -1 is balanced up by +1 and it all works out to zero.

And since it all works out to zero, Wray says, government debt is nothing to worry about.

There are a couple of practical issues here that Wray speeds away from. First, it would be very interesting to hear his explanation of the Greek debt crisis. After all, when the Great Recession broke out a bit over a decade ago sovereign-debt investors ran away from Greece and several other European countries like Venezuelans from their socialist paradise. If governments can borrow infinitely, why did Greece happen?

I can foresee the standard answer from Wray and other MMTers: Greece did not have their own currency, hence they could not print as much money as they wanted to. However, this does not explain the 20 or so years predating the euro, during which Greece continuously racked up debt, eroded the value of their currency and still - despite its own currency and its own central bank - still ended up in such a bad shape they were barely even admitted into the euro zone.

Other countries provide even better examples. Zimbabwe comes to mind, as does Venezuela. If MMT works so well, how did Venezuela end up in a spot where a Pepsi that cost 1 bolivar last year now costs over $1 million bolivars?

Having escaped the hyperinflation problem, Wray goes on to blame the Great Recession on financial corporations. He even refers to the macroeconomic crisis as the "Global Financial Crisis", ignoring clear evidence that the crisis did not start in the financial sector. On the contrary, it was a sovereign-debt crisis, brought about by market loss of confidence in over-indebted governments.

Indirectly, of course, Wray and other MMTers admit that government cannot borrow as much as it wants to. That is why they say that when debt-market investors fail to provide the credit government wants, it is time to crank up the monetary printing presses.

There is a related reason why socialists disguised as MMT proponents keep telling us that everything will be alright if we just print more money. It was the financial sector that walked away from government debt and caused the debt crises in Europe a decade ago. Banks had invested in large portfolios of what they thought was low-risk treasury bonds, to balance more speculative, higher-risk lending to the private sector. However, the government that had issued the debt did not do what they needed to do in order to protect the low-risk status of their bonds. When Greece, Spain, Italy and other European countries reached the point where low-interest lending was no longer credible to the market, financial institutions rightly started selling off.

When lending to the private sector also proved unreliable, banks saw the whole spectrum of their portfolios deteriorate. This, of course, added to their desire to sell off treasury bonds; it was not until the European Central Bank stepped in with massive infusions of cash that the banks returned to the sovereign-debt market. Borrowing cheaply from the ECB they could make boat loads of money by buying Greek, Spanish, Portuguese, Italian, even French debt at higher interest rates.

These profits were caused by government policies distorting debt markets.

Yet none of this matters to Randy Wray. Instead, he appears to want to punish financial corporations for their unforgiving evaluation of binge-spending governments. Concluding that the

he makes the case that

we should be focused on promoting investments in human, private, and public capital.

This is supposed to happen without the forefront participation of the financial sector, because it has grown "too large".

Which it hasn't. Wray's only real metric, the financial corporation share of total corporate profits, actually speaks against him for the most part. On the one hand, Figure 1 reports a moderate increase in the number that Wray relies on: 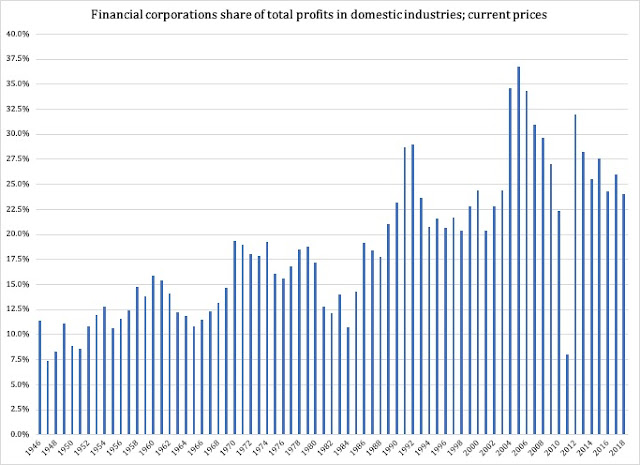 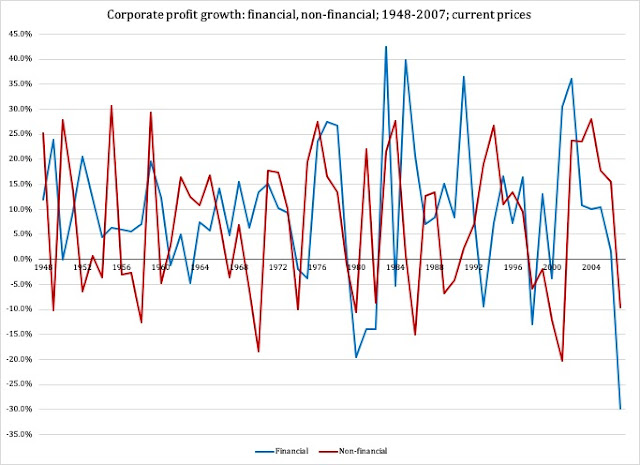 There is one exception, and that is the wild-swinging beginning of the Great Recession. After huge initial losses, banks came back and went back to earning money. Once they did, though, their profits went back to growing largely on par with non-financial corporations: 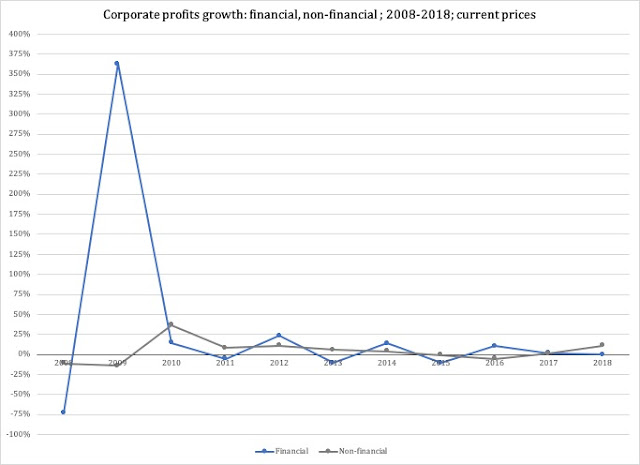 And again: over approximately the past 15 years the profits of financial corporations have declined as share of total corporate profits. Since Wray relies heavily on his criticism of banks for the premise of his MMT argument, we must unfortunately conclude that not even this part of his argument does not hold water.

As we have seen before, though, lack of real-world foundation does not stop socialists from advancing their big-state agenda. What matters, therefore, is not to convince them on how wrong they are, but to explain to those listening why socialism - still - does not work.
at June 03, 2019