A Remedy for Stagnant Family Incomes

There is no doubt that work-based income in America has been stagnant recently. There is also no doubt that this has hit middle-class families more than those with higher earnings. That said, traditional welfare-state redistribution is exactly the wrong remedy; the good news is that there is a way for Congress to do something for middle-class families without going on another egalitarian spending spree.

Despite its strong performance recently, the U.S. economy is still plagued by structural problems. The mere fact that we can barely sustain three percent growth should be at the very top of our daily economic conversation; back in the 1990s we had four straight years of 4+ percent growth, three of which at 4.5-4.75 percent.

No shadow falls over President Trump: with Congress unwilling to work on structural reforms, regardless of majority, Trump is doing what he can do reignite the U.S. economy. However, as GDP growth tapers off during this year and we find ourselves in a recession in the fourth quarter, Congress may very well get a rude awakening as the deficit runs amok. The Federal Reserve will be called upon to monetize the deficit with a new QE-style intervention - a bad idea for many reasons.

There will be two arguments for a new QE:

1. It prevents panic-driven spending cuts or tax hikes in the midst of a recession; and
2. It depresses interest rates, providing some remedy primarily for households.

These two arguments are valid, but under one condition: that the U.S. government does not lose more in terms of credit rating. For every credit downgrade the international sovereign-debt market will demand higher interest rates to buy our Treasuries; if a new QE is part of the reason why we have problems on the sovereign-debt market, then the Federal Reserve really has its hands tied. Any measure to bring down interest rates could backfire with sustained or even higher rates.

A counter-argument would be to point to Europe, where the ECB managed to ease the debt crisis along the southern rim of the euro zone by printing money profusely and buy guaranteeing to buy back treasuries denominated in euro, regardless of the credit score of the issuing country. There is no doubt that this provided short-term relief, but it also flooded the world with euros in a way that is not only unconstitutional in the EU but has proven one very important point about economic growth:

It is not fueled by abundant supply of liquidity.

The theory behind letting the monetary printing presses work overtime is that this will give the banks ample financing for loans to businesses willing to invest. The belief in this theory, widely shared among European economists and apparently among leadership in both the EU and the ECB, was reinforced by the ECB's dive into negative interest rates. Its practical meaning is that banks actually have to pay a fine for depositing excess liquidity with the central bank. Lending it to someone - anyone - would be cheaper, even at zero percent interest.

The perennial stagnation in the European economy is evidence enough that this theory is false, or at least resting on a crucial, faulty premise. It is assumed, namely, that the real private sector - businesses and households - have spending plans ready to go but are held back by high interest rates. We should not need more evidence than Europe in the past ten years to realize that this is not the case: we do not have a recession because businesses can't fund investments.

Instead of looking at macroeconomic mechanics within the IS-LM model (the textbook version of which is the origin of this faulty theory) our central bankers and governments should be looking at the role that uncertainty plays in our economy. When entrepreneurs cannot predict with sufficient confidence that they will come profitably out of an investment project, they will abstain - all in the eminently succinct words of Paul Davidson: In times of uncertainty, he who hesitates is saved to make a decision another day.

Europe's recession is relevant to us in America because we are heading in their direction. The very fact that we can barely break the three-percent growth barrier is a sign that we already have one foot in the European macroeconomic quagmire. The other foot will be there if we choose to follow Europe's lead and expand government further.

Government size is, namely, the other big macroeconomic factor, in addition to uncertainty, that holds back growth. Once government consumes more than 40 percent of GDP there is a visible slowdown in GDP growth. If we expand government just a little bit - single-payer health care would basically do it - we would rise above that level and be forever stuck in economic stagnation.

We are already paying a price for the government we have. The slowdown in growth we have experienced in the past 20 years is not as bad as in Europe, but it has already taken a toll on several parts of the economy. One of them is household earnings. There is no doubt that we have seen income differences grow in the last couple of decades, but the reason is not really what it is made out to be. On the one hand, it is correct that work-based income has stagnated, but on the other hand it is not correct that it has stagnated for just low- and middle-class families. It has essentially stagnated across the board.

The reason why families with higher incomes have pulled away from the rest is not that their salaries have risen fabulously, but that they rely increasingly on investment-based income. As I explained back in April, for those making more than $1 million per year work-based income accounts for less than a third of their total taxable income. For those making between $500,000 and $1 million the same share is just over 50 percent. The rest is dividends, interest and other capital-based earnings.

Figure 1 reports the decline in work-based earnings as share of personal income (grey; right vertical axis) as well as the shares of income accounted for by all investment-based earnings (blue; left) and tax-paid transfers (red; left). It is interesting to note how work-based income has fallen by ten full percentage points in the past 50 years: 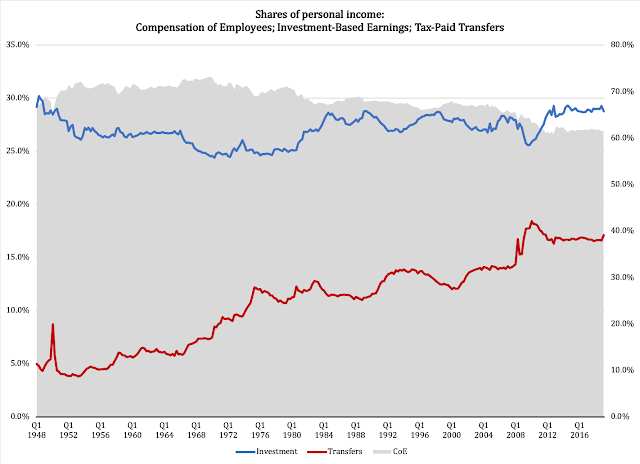 It is stunning to see the rise in transfers - entitlements - as share of personal income. Its share has tripled since the start of the War on Poverty.

While investment-based income has remained relatively stable, there has been an almost tectonic shift in its sources. In the middle of last century income from real estate was relatively common; today financial assets have become prominent.

Figure 2 takes a closer look at the specific relationship between stock dividends and personal income. It also correlates that share with the total value of the S&P 500 companies as share of GDP: 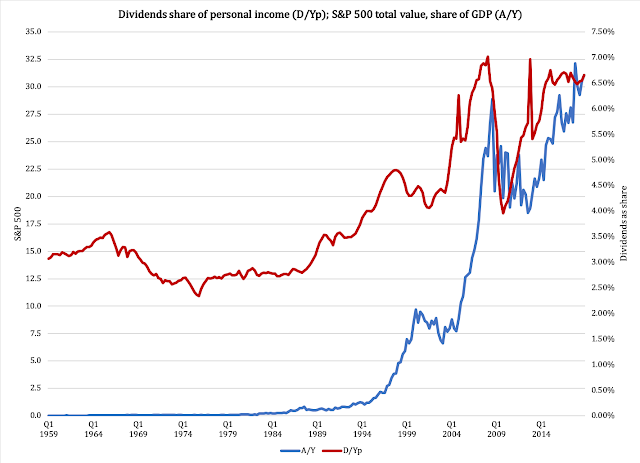 Causally speaking, these two ratios are not directly linked. However, if

a) Dividends rise with the stock market value of a business, and
b) Personal income in general stagnates with stagnant GDP,

then there is an obvious explanation for the correlation.

Figures 1 and 2 explain why higher-earning households have pulled away from the rest of us. They own equity. If we want lower-income families to experience improvements in their personal finances, we should therefore make it easier for them to invest in the stock market. This is not possible for many people out of monthly earnings; living paycheck to paycheck means any stock market investment is a pipe dream. However, if Congress would let families - especially low-income families - invest their Social Security savings in the stock market, we would see substantial long-term financial gains for low- and middle-class families.

In addition, Congress must of course stop the growth in government spending and generally start privatizing economic functions now under government control. Until they get their act together on that front, a private-account reform to Social Security would go far in terms of helping lower-income families grow financially stronger.
at June 10, 2019