Tesla is going down. It is a slow, agonizing death, but it is happening. Hopefully, some do-gooders in politics and the pundit sphere can learn a thing or two from this debacle. And save taxpayers from having to fund more of them in the future.

Ponzi schemes are always profitable for the people who get in first. Social Security is a classic example; Tesla Motors is another. The company is bleeding cash at a rate that almost can compete with our deficit-addicted Congress.

Tesla's Elon Musk is the corporate con artist who lied last fall about having "secured" funding to take Tesla private and who is notorious for making literally unbelievable statements about future production volumes and profits. So far, he has done well, in no small part thanks to huge cash infusions and price subsidies courtesy of taxpayers, but he has also been able to raise money - a lot of money - from venture capitalists and stock market investors.

The decline of Tesla is a story with broader implications than just investors losing money and employees losing jobs down the road. It is a story of massive misallocation of capital and workforce thanks to government's desire to shape the economy in its ideological image. In fact, Tesla is now so close to its demise that it will soon be time to tally up the gross misallocation of resources that this company and associated political mythology have caused.

To see just how close Tesla's final hours are, consider this little story from the Wall Street Journal, Weekend May 25-26 print edition (pp. A1 and A11):

Tesla's shares no have a negative return over the past five years, and the gloom appears to be deepening: Two Wall Street analysts said this week that, in a worst-case scenario, the shares would fall to $36 or less. Another called the company's problems a "Code Red". Such language is dramatic, but the reasons for it aren't hard to see.

Before we go through those reasons for crying "abandon ship" to all Tesla shareholders, let us remind ourselves of the stock's daily closing price: 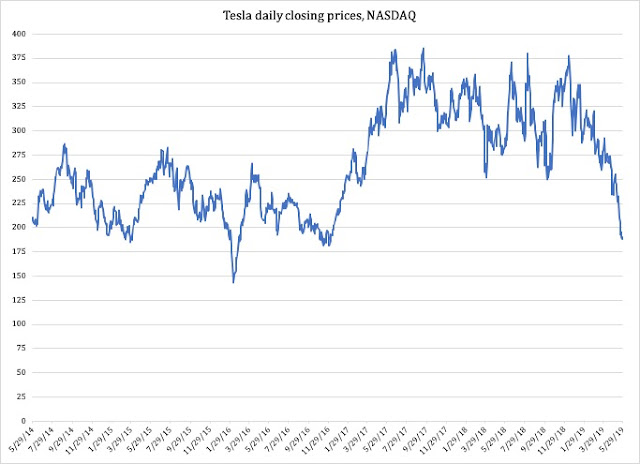 In other words, a steady decline for about eight months now, but already before that, last summer Tesla's stock price moved up and down with a 25-percent range from its low closing prices during that period. Both that period and the longer decline since last fall have been associated with increased volatility in daily trade volume: 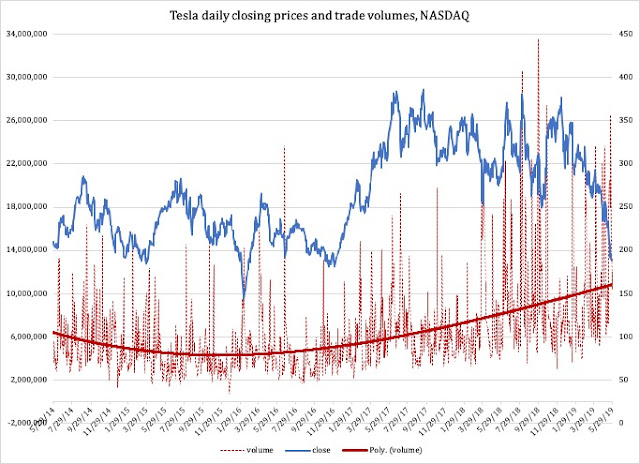 Without drawing too far-reaching conclusions from this, it is worth mentioning that volatility and uncertainty often go hand in hand. This holds true in economic activity in general as well as on the stock market, the difference being that the stock market is more of a concentrate in time of how uncertainty and volatility interact.

Time-wise, the rise in traded volume volatility and the simultaneous downward trend in the stock price suggest that Tesla is fighting an uphill battle against eroding investor confidence. The aforementioned Wall Street Journal article does not exactly ease that erosion. The fall from a price in the $200 range toward $36 is akin to an implosion, the reasons for which the Journal gladly explains:

Tesla burned through more than $900 million of cash in the first quarter. The company says it will stop consuming cash and start generating it in the rest of the year, even while raising capital expenditures. There is a lot riding on that resolution: it has only a year's worth of cash left if its current burn rate doesn't change, even after a financing deal in May brought in $2.4 billion.

It is frankly amazing that people still want to invest in this country, but hey - it's a free country and a free market. Still, a company that, says the Journal, "has spent about $10 billion cumulatively on running its operations and capital spending" over the past ten years and "has turned just four quarters of profits", is a company that is ready for the corporate junkyard. The main reason why it is not there yet is the federal government's ideological infatuation with electric cars.

Bluntly, Tesla continues to survive not on profitable business operations but because of corporate welfare and discretionary private revenue. This, of course, is a flawed business model, and the Wall Street Journal rolls it up from both ends - the cash flow deficit and the inability of Elon Musk to comprehend how you actually run a modern manufacturing operation:

Building a midprice, mass-market electric car consumes significant amounts of cash, and Tesla's resources are running low. Tesla still hans't mastered the just-in-time logistics necessary to produce a low-margin vehicle, a game in which cars sitting on a lot equal lost money. In the first quarter, it made 22% more cars than it sold, and said it expects production to outpace deliveries for the rest of the year.

It has been decades since established car manufacturers learned just-in-time production. Anecdotally, when Volvo overhauled its operations in Torslanda outside Gothenburg, Sweden thirty years ago their goal was to make sure that no part that goes into a car remains inside on their property for more than 20 minutes. Whether or not they ever achieved this this tight timeline is another story, but the concept is intelligent: you do not buy any parts that you do not already have a contract for in the other end.

Tesla has not had to worry about just-in-time operations, simply because Elon Musk - who I am convinced is an incompetent business manager - has separated business cash from business operations. In his mind, bringing in cash is a matter of sweet-talking investors and courting government subsidies.

This works so long as you share an underlying ideological preference with investors and government. If investors can be made to believe that they are throwing money after a concept - in this case a virtuous idea - rather than a manufactured product, then they are much more willing to open their checkbooks than if they have to actually examine business operations.

It is here that Elon Musk has his advantage, as is evident in his ability to continue to sell tickets to a sinking ship. But his inability to comprehend, let alone master the operations side of Tesla is beginning to shine through in more ways than just chronically negative cash flow. The Journal gives a compelling example:

Detroit has struggled to make money lately even on traditional sedans. Part of Tesla's plan to do so on pricier electric-powered ones was to eschew the usual dealer network of service centers. That strategy boost profitability up front, but it has now left the company on the hook for expensive warranty repairs. For a traditional car company, service is a cash cow - a way to get customers into the dealership to buy a high-margin product. For Tesla, it is a cash pit. The company lost more than $190 million in the first quarter in the business segment that includes after-sale services.

Why would Tesla do away with a solid source of future revenue for an upfront boost in profitability? Simple: Elon Musk needed to hike the stock market price in order to raise more money.

This is almost a picture-perfect definition of a Ponzi scheme. You do whatever you need to do in order to get more people in at the bottom of the pyramid, even if it means throwing the window frames into the fire to heat the house.

Now, though, Tesla is running out of options. With the stock price in long-term decline and daily volume volatility increasing; with the political winds turning away from almost blank-check subsidies for electric cars; his only path forward is to do what old-school business leaders have always done.

Run your business with operational profit.

Elon Musk has proven over and over again that he can't do it. Either he steps aside entirely and let competent people run Tesla, or the company will crash and burn.

I suspect the latter will happen. When that happens, it will hurt a lot of workers and investors. It will also be a day of reckoning for the entire political campaign to put us all into more or less useless, prone-to-fire electric vehicles. It will be a day of reckoning for all those politically correct pundits that gladly look the other way as the metals needed for the car batteries are dug out of the ground by child slave labor in the most unstable, child-abusing, totalitarian corners of the world.

Fortunately, when Tesla implodes we might get the chance to have a conversation about all that. And, of course, the absurd investments needed to increase electric power production to allow daily recharging of all the new electric vehicles that our politicians want us to buy.
at May 30, 2019