The Indebted States of America

The federal budget deficit is well known, as is the larger-than-GDP debt. With the OMB predicting a trillion-dollar deficit as early as this fiscal year, our nation's indebtedness is approaching the unsustainable at breathtaking speed.

What is less known is that our states, which are not supposed to run deficits, actually are prolific borrowers. Their addition to our state's indebtedness is concealed by the fact that it is spread out over 50 jurisdictions. Although some states stand out for their abysmal fiscal performance - California and Illinois come to mind - the problem is substantially bigger than the media news cycle may tell us.

In fact, states have been using deficits to supplement tax revenue since at least the 1950s. Figure 1 adds deficits to tax revenue, giving us a simulated, static personal-income tax rate that would have been needed in order to take states out of their deficits entirely: 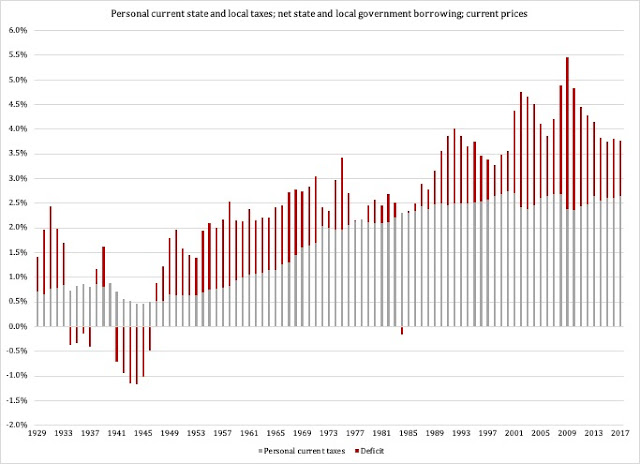 In 2017, a "deficit elimination tax" would have raised the tax for the average taxpayer by more than 42 cents for every dollar he actually paid. Disregarding dynamic effects of such a drastic tax hike, the total amount of new state revenue needed was $190 billion.

There is little doubt where this costly debt is coming from. We get a nice clue from comparing the bite that state and local personal taxes (including but not limited to income taxes) take out of personal income, to the cost of debt service spending. Figure 2 reports the ratios of, respectively, taxes and debt service to personal income, by state, for the years 2016 and 2017. These 100 pairs of observations are then grouped in deciles and reported by the tax ratio, from high to low. There is a moderate yet interesting correlation between the two variables, such the cost of debt appears to be notably higher in states with high taxes: 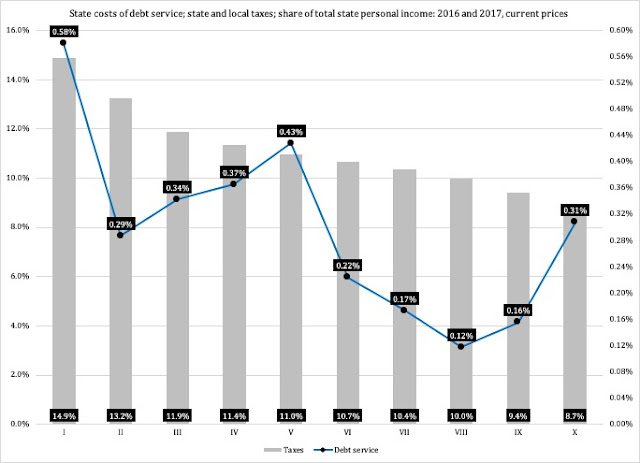 One point to keep in mind: the debt cost ratio to personal income comes in such small fractions that small variations can appear large. That said, it is difficult to deny the fact that states with higher taxes tend to spend more money, relatively speaking, on debt service than states with a more lenient tax burden.

The correlation makes sense: we can expect states with relatively high taxes to have larger welfare states. Welfare states cost money based on ideologically defined preferences, not on the ability of taxpayers to pay for the entitlement programs. Inevitably, the cost of a welfare state outpaces its own tax base; rather than changing their ideological course, governments then tend to make up for the fiscal shortfall by taxing future taxpayers.

There are two important questions to address on this issue:

1. How indebted are states really? In other words, can they actually get out of their indebtedness?

2. How does the state debt burden distribute among the states?

I will get back to these questions in future articles, in particular with the size and focus of the welfare state in mind. For now, let us note that in the two years surveyed here, Nebraska, Oklahoma and Wyoming had no debt service payments to make. It is also worth noting that this does not tell us that zero debt payments automatically goes hand in hand with low taxes; in 2016, Nebraska had the 16th highest taxes as share of personal income, with Wyoming 19th and Oklahoma 46th.

That said, the moderate correlation in Figure 2 is still there. More to come. Stay tuned.
at April 03, 2019