Before Republicans in Congress move forward with their plan for paid family leave, they should take a look at the Swedish experience. There, the pendulum is swinging in the other direction, and it is not because of some sudden ideological awakening. The reason is much more sinister than that.

---
It is painfully obvious that government causes economic stagnation. We can witness this in Europe, as I explained most recently on Tuesday. We can also see it here in the United States where, as Figure 1 reports, states with larger governments tend to suffer from slower growth: 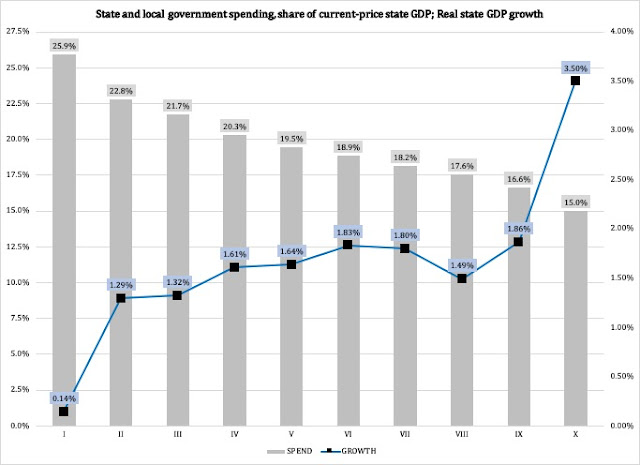 Several states have or are planning to create paid-leave programs, and there is no shortage of plans for a program at the national level. My 2017 white paper analyzed the crop of proposals at that time.

Since then, the Independent Women's Forum (IWF) has developed a proposal for paid leave tagged on to the Social Security system. This proposal has evolved into the Economic Security for New Parents Act, championed by Senator Rubio (R-FL). About this plan, IWF economist Patrice Onwuka writes:

The idea is simple: allow workers early access to their Social Security benefits to fund one, two, or three months off following the birth or adoption of a child. In exchange, moms and dads defer collection of their retirement benefits by a modest number of months. The plan is completely voluntary. Workers who have access to more generous leave benefits provided by their employer need not use this program. Social Security Earned Leave is budget neutral. Individual workers who need these benefits pay for them by delaying their own retirement benefits. That’s a tradeoff they can make but are not forced to do so. Under this plan, there are no new taxes on all workers or employers. Workers who are beyond childbearing age, can’t have children, or don’t want to have children don’t unfairly have to pay for those who do. It also does not raise labor costs for employers, who may in turn reduce current paid leave benefits, cut jobs, or forgo hiring female workers. By functioning within the existing Social Security program, SSEL would not create a new bureaucracy to manage the program. Nor would it impact Social Security’s solvency in the long run. Importantly, this plan is targeted to those who need it most. Low-income workers would receive a bigger benefit than higher income workers, since benefits are based on the progressive Social Security formula. This makes sense for everyone. People who are struggling to get by and lack access to employer-based paid leave benefits often end up turning to public assistance during times when they can’t work, like immediately following the birth of a child.

I have raised concerns regarding this idea on several occasions, concerns that I am not going to repeat here. Instead, let me bring in another aspect of this that has been under-reported in the public discussion about paid leave - and this is an aspect where the IWF and I are in agreement. A traditional paid-leave program, set up as a separate entitlement with its own, new and dedicated revenue source, is an outright expansion of the traditional egalitarian welfare state. As such it constitutes an expansion of government precisely of the kind that - as explained above - slows down economic growth and leads to permanent, and growing, budget deficits.

Since the federal government already has a chronic deficit, a traditional paid-leave program is a particularly bad idea. Furthermore, as I explained in a recent article, our states are indebted and should stay far away from any new entitlement programs and taxes that further hamper growth and erode their tax bases. In short: there are formidable fiscal and macroeconomic arguments against traditional paid-leave programs.

Over time, the combination of sustained deficits and a stagnant tax base make it impossible for governments to keep their promises. I could reiterate my stern warning from last year about a Greek-style fiscal crisis here in America, and we could go back and listen to Harvard economist Martin Feldstein's equally blunt words, but let us for a change listen to those who have had long experience with the traditional form of paid family leave.

My former countrymen back in Sweden. Their paid-leave system is part of a separate, and very costly general income security system that also includes paid sick leave. As for the paid family leave part, it allows parents to take up to 480 days off to be home with a newborn - or a child up to the age of eight. It combines five different entitlements, regulating among other things how the parents have to distribute the days between them. The benefits are normally equal to 75 percent of a person's taxable income, but cap out at approximately $34,000 or about ten percent above median income.

The problem for the Swedish government is that its entitlement programs are fiscally unsustainable - despite some of the highest taxes in the world. Not only did they take the fiscal chainsaw to their welfare state back in the '90s (see my book Industrial Poverty where I analyze this long, strenuous austerity episode in detail) but they are now facing deficits again despite having significantly downsized the spending side of their welfare state. Taxes, namely, have not come down, still making taxpayers pay for a Mercedes while driving around in a Kia.

The situation has now gotten to a point where there is an emerging debate over how to reform the Swedish paid-leave system in the "opposite" direction, i.e., how to downsize it and get government out of the promises it can't keep. Among the ideas being floated is a semi-privatization model, courtesy of the Swedish think tank Timbro. As a background for the reform, Timbro policy analyst Siri Steijer explains (my translation):

The Swedish paid parental leave program is extremely expensive ... It is also a trap for women: in a previous report Timbro explained that women's income growth, their careers and workforce participation are hurt significantly by the long leave periods. The program is also problematic from other angles. The generous benefits are paid out only to those who have a family - even though all workers are forced to pay for it. This is government's way to encourage child birth, something that really should not be a political issue.

Steijer also explains how large segments of the workforce fall outside the program, simply because they do not have an employment situation that matches the template for the program. This is a point that would apply directly to U.S. state programs, which roughly resemble the design of the Swedish program.

In response to an increasingly unsustainable situation, Timbro proposes cutting the eligible paid-leave time in half, from 16 months to eight. They also suggest replacing the tax with a loan program not unlike student loans, taking taxpayers out of the picture (except as co-signers for the paid-leave loans). This would also let private parties tailor their own leave programs independently of government.

While this model may not be suitable for the United States (our experience with federally sponsored mortgages and with nationalizing student loans are discouraging enough) the fact that the debate in Sweden is moving in the opposite direction of us is worth noting. It is not driven by any concerted effort at rolling back the welfare state, although the Timbro think tank has a history of challenging it ideologically. The primary motive is instead to make the Swedish welfare state less unaffordable and easier to fit inside a tax base that is already stretched beyond its limits.

Herein lies the real lesson for us here in America: the more promises government makes, the fewer of them it can keep. Traditional paid family leave is a good example. While, again, I am opposed to the alternative developed by the IWF and Senator Rubio, it is at least an effort at avoiding the fiscal problems associated with traditional programs like the one they have in Sweden.
at April 12, 2019