Income Inequality: What They Don't Tell You

The so-called income inequality in the U.S. economy is not as bad as we are led to believe. Furthermore, the differences that do exist, have a cause that even fewer people will tell you about.
---
Europe is an irredeemable mess of industrial poverty where stagnation and decline will dictate the future for generations to come.

Sadly, though, it is not the only scene of imploding prosperity: with Japan in perennial stagnation and Canada following about a decade behind Europe, the United States of America is left as the last vestige of liberty, capitalism, entrepreneurship and opportunity. That hold-out, however, is in grave danger, and the reason is not just that our nation's leftist cohorts have decided to cross the the last line of sanity. We also have a serious problem with Republicans whose commitment to the prosperity-destroying welfare state is almost as strong as that of the left.

Thanks to the neoconservatives in the Republican party, the parallel lines of conservatism and liberalism in American politics have almost merged into one statist track for our nation to follow. We still have not gone all-out Scandinavian in our pursuit of the welfare state, and thanks to that we are still outperforming Europe in terms of economic growth. However, that is not much to cheer about; your boat is still sinking, even if the hole in it is smaller than that on the Titanic.

Until Congress starts making the necessary reforms, we will continue to follow in the footsteps of the declining welfare states in Europe and Canada. The core of the problem is the idea that government both can and should reduce economic differences between individual citizens. It should do neither, but that point continues to fall on far too many deaf ears in our nation's capital.

Nevertheless, even if we tolerated the premise that government should reshuffle income among the American people, it is an inescapable fact that the U.S. economy is in no need for such measures. Government has done quite a job of it already. The distribution of income is, namely, already more flat than it is often portrayed to be.

Superficially, it looks like the highest-earning households have pulled away from the rest of us. Figure 1 reports the inflation-adjusted growth of $100 of income for households in various income groups: 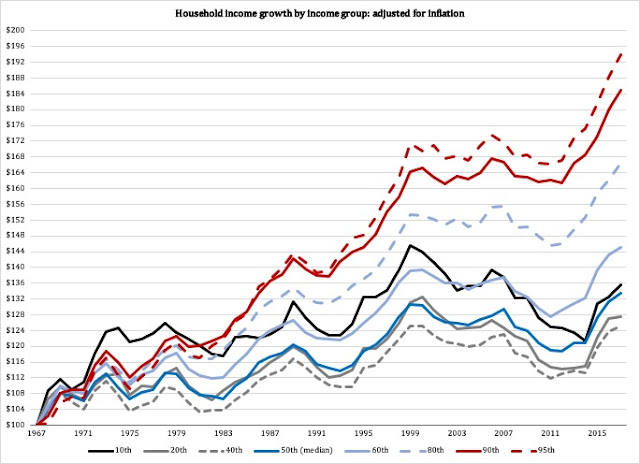 The 60 percent of households that have the lowest incomes have seen their money grow largely within a narrow bracket. The upper income groups have taken off substantially, but the difference in growth was only becoming pronounced after the 1990s. That was, notably, the last time the U.S. economy exceeded four percent annual growth.

Since the Millennium Recession "the 60 percent" have largely experienced a stagnation in their inflation-adjusted incomes. It is here that many advocates of income redistribution get the fuel for their arguments favoring more egalitarianism. However, a closer look reveals that things are not nearly as dramatic as they look. In fact, those who want more income redistribution as a desperate solution to raise the standard of living for lower-income Americans are - to brutally fuse metaphors - clamoring for the straw that will break the camel's back.

Figure 2 reports the share of taxable income that originates in workforce participation - employment, for short. While the income groups are different than in Figure 1 (these numbers are from the IRS) they reveal a shift in income sources as income grows. Taxpayers making more than $1 million get less than a third of their income from work; those who fall into the $500,000-$1,000,000 bracket earn just over half their income that way: 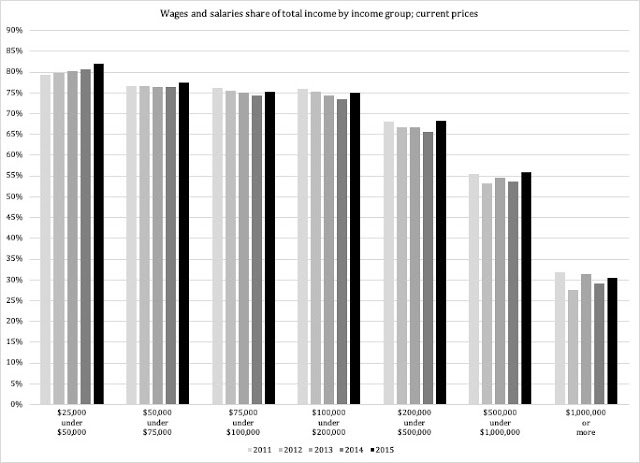 Since high-earning households do not qualify for the plethora of entitlement programs available for lower income households, it is reasonable to assume that the reason why the highest-earning 20 percent have pulled away, is that they earn a substantial share of their income from equity. Without detailed data on the composition of their incomes over time, we cannot isolate exactly how their earnings would have fared, had they not seen strong growth in stock dividends and other investment-based income. However, it is reasonable to assume that the performance of the large amounts of liquidity that have been pumped into the U.S. economy over the past 20 years - especially since 9/11 - have fueled the stock market in particular, to such an extent that it has allowed wealthier taxpayers to pull ahead.

That, however, only explains their rise in income. It does not explain what is, in Figure 1, clearly a stagnation of work-based income. To see where that comes from, we need to take a look at U.S. GDP growth. Figure 3 has the story: 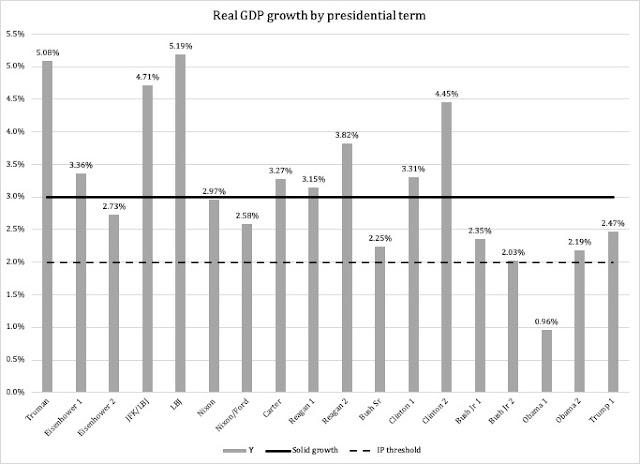 Not a single presidential term has managed to reach three percent growth, on average, since Bill Clinton was in office. As a consequence of 2-2.5 percent growth, needless to say work-based income slows down as well. The situation was not helped by the depressive performance of the Obama administration and the deeds of the Democrat majority during the first half of his first term. However, that was only the low-mark of an economy that has been dragging its feet for 20 years now.

All while its political leaders have dragged their knuckles along the gravy-soaked floor of Capitol Hill, focusing more on the politically expedient and ideologically convenient than the nation's economy.

One of the more troubling results of their deeds is a tax system that is designed to meet egalitarian ideological preferences. It amplifies the negative effects of a stagnant economy in two directions:

At the heart of this problem is a ticking fiscal bomb: the budget deficit. It continues to grow thanks to insufficient GDP growth; the Trump tax cuts bought us a bit more time but we are already running out of steam from it. What we really need is a flat personal income tax combined with substantial, fiscally sustainable reforms to all non-defense federal spending.

Let us hope the Republicans come around in larger numbers, realize what they need to do on the spending side and stand up for their vision. There are grains of hope in their Congressional leadership; much more is needed.