The European economy is stuck in a state of perennial stagnation. Its political leadership shows no signs of understanding the nature of the problem; if anything, they are bound to make it all a whole lot worse.

Two articles in the Wall Street Journal from Thursday April 11 (print edition, p. A7) illustrate with remarkable clarity the phenomenon that I have defined as industrial poverty: when a modern industrialized economy is under a heavy enough burden of a welfare state, it grinds to a halt and the standard of living stops increasing. People can only replace, not increase, their standard of living and growing generations have to work harder to achieve that same standard.

could take fresh action to shore up the eurozone's faltering economy if the outlook darkens, underscoring deepening concerns among policy makers over a slowdown that has dragged on for longer than expected.

No, the slowdown is not unexpected, and it is not a slowdown. It is a stagnation. Figure 1 reports real annual growth rates, reported quarterly, for the 19-country euro zone and for the United States: 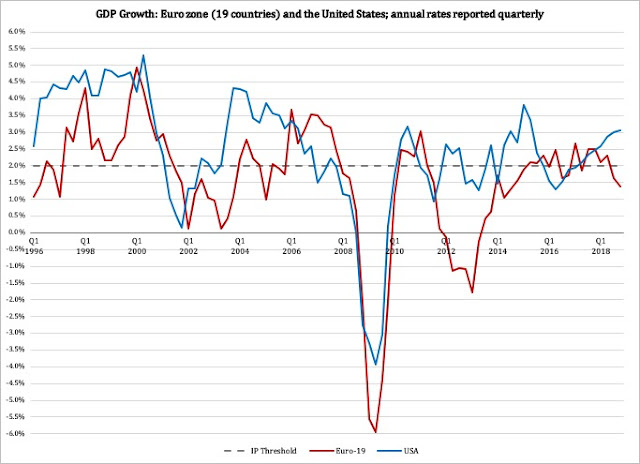 Starting in 1996, the earliest year for which there is reliable Euro-zone growth data, the U.S. economy has outperformed its European counterpart at almost every turn. Furthermore, as I explained back in August the Europeans get the bulk of their growth not from private consumption as we do, but from exports. What this means, plainly, is that even when their economy is growing it does not generate much room for increases in the standard of living.

To further emphasize the point that the European economy is in a state of long-term stagnation, not in some cyclical slowdown, Figure 2 concentrates growth into averages for five periods. The first period, 1996-2000, represents the bulk of the strong '90s economy - incidentally the last time the U.S. experienced four-percent growth - which ended in the Millennium Recession. That recession, in turn, is captured in the next period, 2001-2002, which was followed by a weaker but still reasonable growth period (2003-2008). Then came the Great Recession, 2009-2010, which was the deepest economic downturn the Western world had experienced in the post-World War II era. It ended in 2011, which is when the fifth period starts in Figure 2: 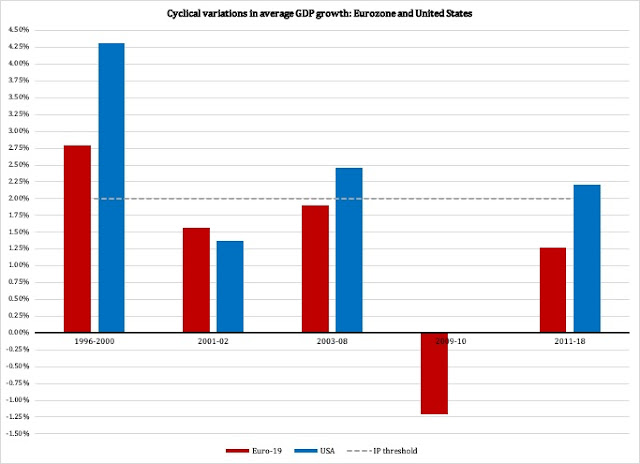 The U.S. economy outperformed the European economy in four of these five periods, suggesting that America still has institutional, legal and regulatory advantages over Europe that continue to give us the economic edge. For one, our government spending is still smaller as share of GDP, which as I explained recently directly contributes to higher growth.

That does not mean we are doing spectacularly well. We are not. As shown by the U.S. column for the 2011-2018 recovery period, we have barely scraped ourselves up above the Industrial Poverty threshold.* However, the problems in Europe are far worse: they have not managed to average 2+ percent since the 1990s. For 20 years now they have been in a state of stagnation, without their politicians and leading economists even realizing it. In fact, going back to the aforementioned Wall Street Journal article, focus is still on attempts to remedy a recession, not fix a structural macroeconomic problem. According to the Journal, European Central Bank president Mario Draghi

said policy makers would consider whether they need to mitigate the impact of the ECB's negative interest rate on eurozone banks - a sign that the ECB might hold rates below zero for some time, and could even cut them further.

This comment, which is representative of political and economic thinking in Europe, suggests that all the Europeans need to do is make credit a bit cheaper and everything will be just fine. The problem is that there is no obvious correlation between interest rates and GDP growth in the euro zone: 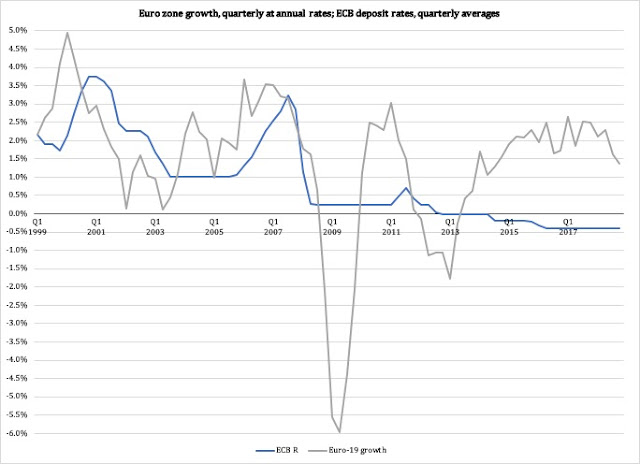 Prior to the Great Recession GDP growth and monetary policy correlated:

1. The growth peak toward the end of the '90s was cooled off by a rise in interest rates;
2. When growth declined as the European economy went into the Millennium recession, the ECB accommodated by lowering interest rates;
3. With some delay, the economy recovered and reached another, though lower growth peak;
4. As the Great Recession broke out, the ECB cut its interest rate significantly, and permanently.

Since then, monetary policy does not seem to have had any effect on GDP growth; not even negative interest rates can bring GDP growth back to the levels it achieved 15-20 years ago.

There is a reason, of course, why monetary policy has no relation to GDP growth: over the past ten years the ECB has used it to allow member states to deficit-spend with virtual impunity. The effect has been a sharp increase in monetary supply, which in turn has flooded the euro zone with liquidity. That flooding has, again, had no discernible effect on economic activity; as I explained in an earlier article, the growth in the post-Great Recession years is driven by a rise in exports, which in turn is mostly independent of domestic interest rates.**

The inability of the European economy to return to good growth rates is thus compounded by the inefficiency of monetary policy. Fiscal policy in Europe is used entirely to protect the welfare state, thus bringing no good news to a struggling private sector. Over time, as the economy is trapped in stagnation and the countries under the euro zone are stuck in industrial poverty, a socio-economic transformation takes place that is bound to have profound effects on Europe's future. Behold the second article from the April 11 Wall Street Journal:

The middle class is shrinking and its economic power diminishing, in the U.S. and other rich countries, a development that threatens political stability and economic growth, according to a report vy the Organization for economic Cooperation and Development. At the peak of its powers in 1985, the aggregate income of the middle classes was four times that of the richest group. Three decades later, it had fallen to less than three times. While income growth for the middle classes had been slow over that period, the cost of housing, education and health care has risen much more rapidly. The result of that squeeze is that middle-income households have taken on more debt and feel less secure in their status, while younger generations are less likely to gain membership of a group once seen as accessible to all.

It is important to note that the concept of the middle class is different in the United States than in Europe. That difference is worth a separate article; the key point here is that once again, an analysis of a macroeconomic phenomenon - the distribution of income - puts its spotlight on the wrong part of the economy. The changes to the attainability of middle-class life in Europe are not, as hinted in the Wall Street Journal article, due to growth in higher-income earnings. The middle class is paying the price of a structurally stagnant economy. When the economy stagnates, people who depend on work for income are less inclined to see advances in earnings than those who depend primarily on equity for their livelihood.

The difference between work-based and equity-based income is exacerbated when an economy is flooded with liquidity. Lax monetary policy pours more money into markets for treasuries, stocks, corporate bonds and real estate. This is the case even if monetary policy, as in Europe, is driven by a desire on behalf of the central bank to allow governments to continue spending as if there were no tomorrow.

In short: Europe is in a permanent state of economic stagnation, cause by an excessively large welfare state. The middle class pays the price, both in terms of lost opportunities to advance their standard of living, and in terms of increased dependency on an increasingly fiscally stressed welfare state. Their despair is fueled by analytical ineptitude both among economists and in the layers of political leadership.
---
*) This is the growth rate, two percent per year, above which an economy is able to increase its standard of living. Below this level, our average standard of living remains stagnant or declines. For a more elaborate definition, see my book Industrial Poverty (Gower, 2014).
**) Exchange rates are determined in part by swings in the interest rate. However, as a general rule only about three percent of swings in interest rate are dependent on trade, which reasonably also means that changes in interest rates that affect the exchange rate have a small effect on trade, and therefore on growth.
at April 15, 2019