My first two articles on socialism in Sweden have sparked some interesting conversations, one of which centered in on the concept of socialism itself and how it relates to the size of government overall. The discussion centered in on the relation between "socialism" and "statism", an important issue I will return to in more depth with a separate article. For now, let me suggest:

The distinction between these two categories matters, because it informs our policy strategies to roll back big government.

As I said, more on that later. Now for an overview of government spending in Sweden.

As I reported recently, the Swedish government takes in half the economy, reshuffles it to its own liking and then churns it out. Most of this spending is - as per the distinction above - socialist in nature:
Of the second category, referred to as consumption, 73 percent is redistributive in nature:


Taken into the context of transfers, which as mentioned earlier are one third of total government outlays, this means that 70 percent of all government spending in Sweden is for socialist purposes

It so happens to be that the U.S. figure is not that much lower. The difference is in how big government is relative the rest of the economy. A detailed comparison will have to wait; for now, let us note that when government spends half the economy, and 70 percent of that spending is for socialist purposes, we have the beginning of a measurement of how "socialist" an economy is. Again, that does not mean that we have a measurement - but we have a beginning of one.*

For comparison, again, the United States is not exactly a bastion of limited government. Adding up all spending - including transfers and consumption - our government spends almost 38 percent of GDP. Approximately 64 percent of that spending is socialist in nature.

The difference between our two countries may not seem to be all that big, and as I explained in my book The Rise of Big Government (get your copy today!) there are now more similarities than differences between the United States and European welfare states in general. However, in some instances the differences are striking, one of them being the government share of the workforce.

The Swedish national statistics agency, SCB, does not public sector-specific employment numbers beyond 2014 (most likely due to stingy budgets causing a serious lag in statistics production). Nevertheless, for that year, the Government Employment Ratio (GER) for the Swedish economy was 408, meaning that for every 1,000 employees in the private sector there were 408 government employees.

The GER for the U.S. economy that year was 187. In other words, even if we add up federal, state and local government employees, we still only have a GER that is 46 percent of what it is in Sweden.

There is one aspect of the Swedish government that Swedes often brag about: the absence of a deficit. It is true that they don't have much of one (although it takes some fiscal creativity to make sure it really does not exist...) but there are some serious consequences of combining a large government and high taxes with a balanced budget. Not only do taxes stifle growth (as we will see in a moment) but they also suppress household earnings. In order to still have a reasonable standard of living - including a house and a car - Swedes therefore have gone deep into debt.

Bluntly, you don't have to believe in the Ricardian Equivalence to see what that means in reality: 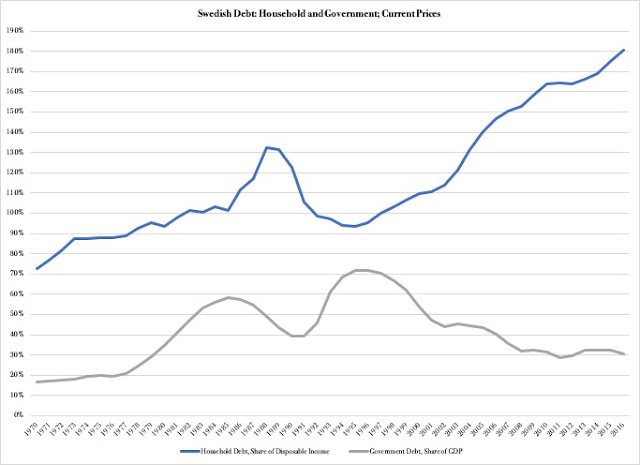 As we saw in yesterday's article, Swedish taxes are quite high, especially on lower incomes. Despite their efforts to get around that by borrowing money, Swedes still can't create economic growth on their own. Private consumption is not even the largest share of GDP anymore: 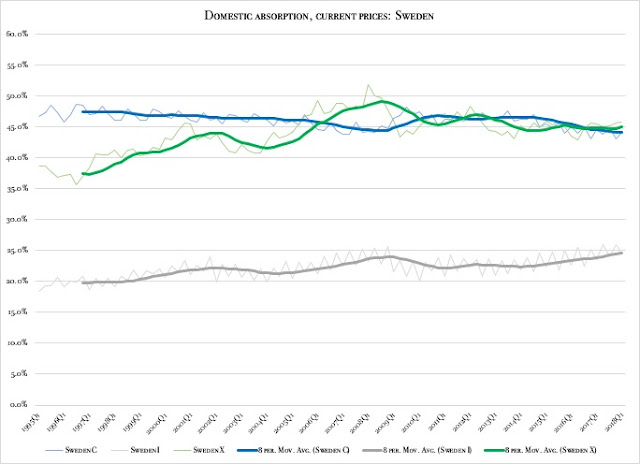 As I explained in an article back in August, the proportions of the U.S. GDP are quite different and much healthier.

Since the Swedish economy is more geared toward economic redistribution than the American economy, it is also reasonable to expect that they are having problems with long-term growth. Again, with exports driving a disproportionate share of their GDP, the Swedes are paying the price for their egalitarian desires. In fact, efforts at reducing economic differences necessarily come with higher taxes. Figure 3 explains, combining the reduction of the Gini coefficient (which is a good measure of "successful" economic redistribution) with the tax burden: 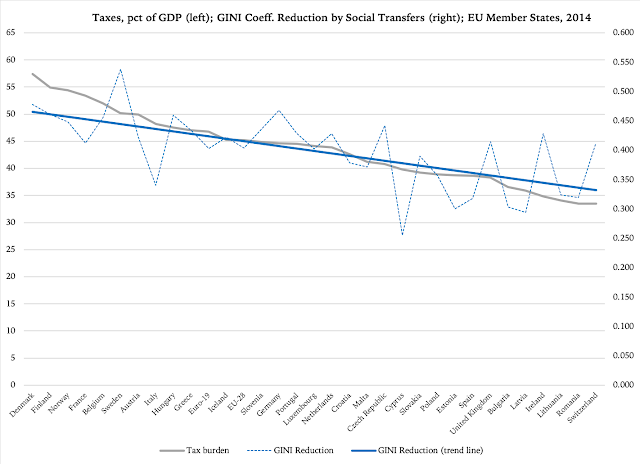 The higher the taxes, the slower the GDP growth rate: 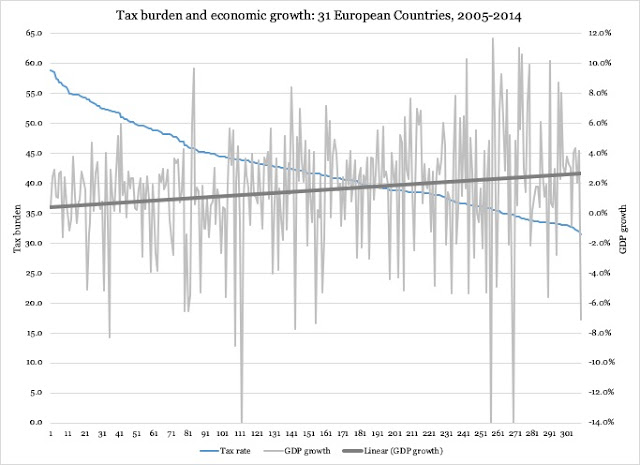 Despite these efforts, the welfare state eventually falls short of its own goal. As taxes suppress growth (as per Figure 3) the reduction in the Gini coefficient first rises - showing that the welfare state has been "successful" - then declines again. The reason is brutally simple: the weaker the economy gets, the less the welfare state can deliver on its promises (as I explained in this two-part paper on the Greek crisis). In other words: 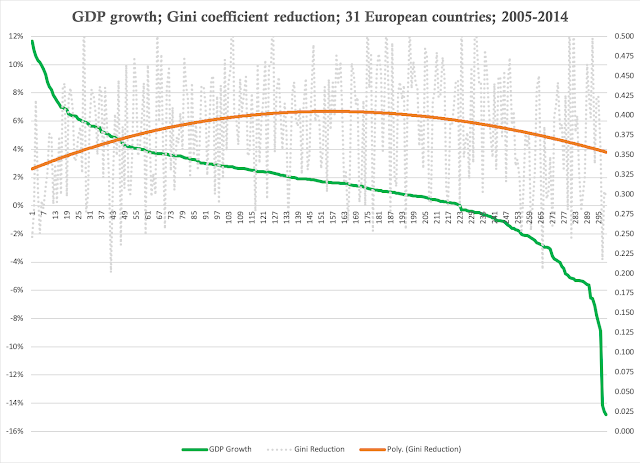 Sweden has a big, fat government that spends half the economy;
Taxes are oppressively high;
The high taxes are the result of an excessive ambition to redistribute income;
As a result, private consumption suffers, forcing households to go deep into debt;
The growth they have comes from exports.

The Swedish economy is running on fumes. The crash - not far away - is going to be brutal. Ultimately, it is all thanks to their socialist ambitions.

There is one last piece on Sweden coming. Stay tuned.
---
*) To give yet another appetizer of what is to come, imagine if we also measure the statist share of government spending - and add the cost of regulations - we are approaching a useful measurement that can inform us about policy priorities, in terms of both timing and nature of reforms.
at March 27, 2019