Do Not Invest in Greek Debt

This has got to be one of the most boneheaded government-debt decisions in recent history. From the Wall Street Journal, March 5, 2019 (p.B1, print edition):

Greece said it plans to issue the first 10-year bonds in nearly a decade, as the eurozone's most indebted country emerges from grueling bailouts and taps brad investor appetite for risky debt.


This is a bad investment for more reasons than I can account for, but here are two. The first is the rather obvious point that the Greek government is the only European government in modern history to purposely default on any part of its debt. Figure 1 shows what this partial default looked like: 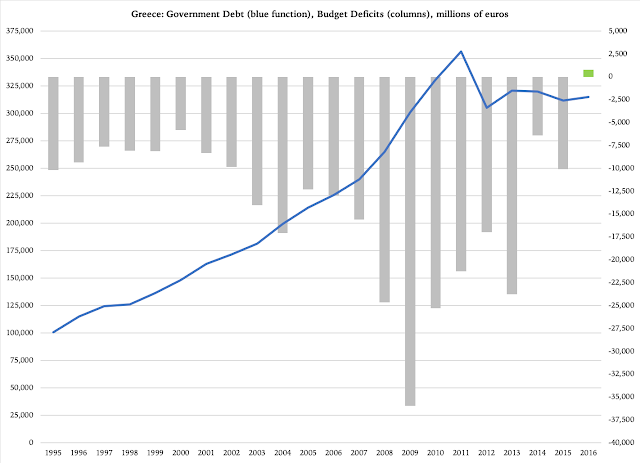 A counter-argument would be that the Greeks have not defaulted on any debt since 2012. This is, of course, true, but the United States, Britain and Switzerland have never even missed an interest payment on their debt.

There are still those who may choose to invest in Greece, as some did even after the default. So long as the risk premium is appropriate vs. other euro-zone sovereign debt, the market can always provide for investors and borrowers from all niches of the market. However, that is not the problem here.

The problem with this new Greek debt issue is that it happens on top of a macroeconomic situation that has been created for one purpose, and one purpose only: to make Greece look credit worthy again. Ten years of austerity packages have aimed at reducing, and eventually eliminating, the budget deficit - regardless of what harm that austerity has done to the economy itself.

Think of it this way. A guy needs to lose weight, so you give him a drug that shrinks his muscles. He won't be able to exercise to stay in shape, but he will lose weight in the short term.

Which brings us to the second reason not to invest in Greek sovereign debt. Austerity policies, forced upon Greece by the European Union, the European Central Bank and the International Monetary Fund, have raised taxes and cut government benefits. The combination is very harmful in both ends: during the worst part of the austerity era, taxes increased from 39 percent of GDP to 50 percent. In the meantime, government spending was cut on absolutely everything that the welfare state has promised people: health care, education, pensions, welfare... and the cuts were not of the fiscal-wizard kind we are familiar with here in the United States. No, these were deep and destructive budget cuts.

For a comprehensive review, see my two-part piece for Prosperitas:

Is a U.S. "Greek" Economic Disaster Possible?
Greece - A Harbinger for the United States?

The right way to reduce government spending is to do it in a predictable fashion where spending cuts and tax cuts go in tandem. Under panic-driven austerity, spending is cut but taxes go up. As a result, government eats deeper into the economy, depressing private consumption and business investments. We can see this with chilling clarity in Figure 2, which reports the absorption components of the Greek GDP: 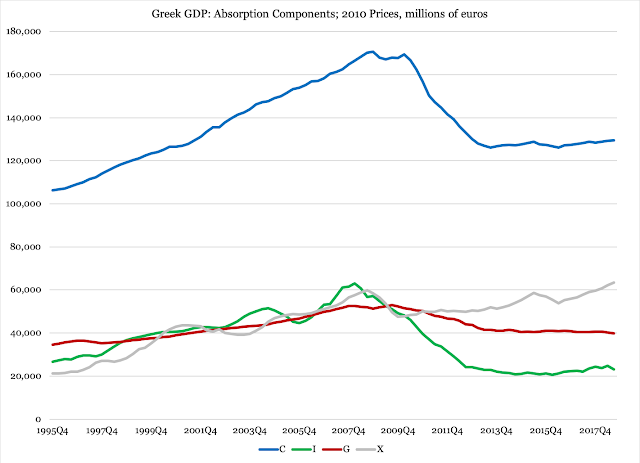 Do pay attention to the green function: in inflation-adjusted terms, business investments (Gross Fixed Capital Formation) have plummeted below where they were in the mid-1990s. Worse still: they remain at that level with no movement upward.

While these numbers do not give us any micro-level details, there is a strong implication that businesses in the Greek economy is not even replacing its capital stock to keep it competitive. It is fair to suggest that the Greek economy is slowly moving backward, from an industrialized economy to something that does not even meet the terms of industrial poverty. The best comparison is a Latin American country, such as Argentina.

The grey function in Figure 2 shows that exports are the only source of growth in the Greek economy. Furthermore, these exports are highly seasonal, with a volatility and product concentration that makes the country's economy exceedingly vulnerable to a narrow segment of the European and the global economy.

Again: austerity has propped up the government budget to make it look debt-worthy. There is no underlying macroeconomic support for it.

Reliance on exports is not limited to Greece, but a pan-European problem. The origin of this problem is the welfare state, which, as I explained back in August last year,


So how, then, do the European welfare states compensate for the loss of the wealthy and the loss of economic growth? Stagnant income among the workforce means stagnant domestic spending, hence slow to no growth in the broader tax base. The plain, simple and brutal answer is that they have returned to old-fashioned mercantilism. We know it as "exports". By aggressively promoting exports, they have been able to enjoy at least some growth despite the stagnant nature of domestic spending. When exports grow, so does the part of the economy that lives off foreign markets; the welfare state can tap into new sources of revenue, seemingly without having to worry about the negative effects of high taxes on the domestic side of the economy.

A look at the absorption components of the euro-zone economy validates this point: 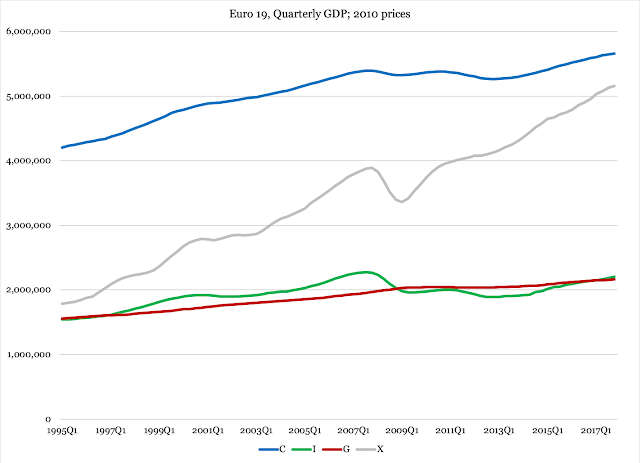 The growth numbers for the euro-zone economy are not quite as bad as they are for Greece, but it is still noteworthy that the strongest-growing component is exports:


By contrast, here is a picture of the U.S. economy: 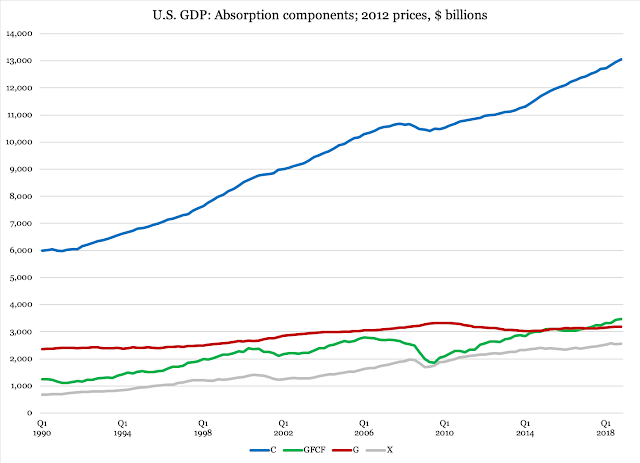 Note how gross fixed capital formation (business investments) is now the second-largest absorption category. This is unlikely to sustain throughout 2019, but the balance between the absorption categories is still a lot more healthy than in Europe:


There is a serious risk that the Greek economy will be unable to produce the tax revenue that the Greek government needs in order to maintain its debt commitments. More importantly, as it issues new debt and the economy stalls or even contracts, the debt-to-GDP ratio will again start rising. This will quickly have negative effects on Greece's credit rating - and the ability of owners of Greek treasuries to sell them without a loss.