The Republican party, under the leadership of Senator Mitch McConnell, former House Speaker Paul Ryan, current Minority Leader Kevin McCarthy, Conference Chair Liz Cheney and head of policy development Gary Palmer, has a formidable and unique responsibility on their hands. It is their job to stave off an existential attack on the United States, mounted by the Democrat House majority.

There, on the other side of the aisle, we find the largest socialist caucus in decades, possibly ever. Their reform ideas, which include universal child care, single-payer health care and even reforms to our very constitutional form of government, would put a quick, brutal end to our country. They would hollow out the nation that, for almost 250 years, has rested on the idea that individual freedom is more important than government powers - and they would put in its place an unlimited, not to say unhinged, welfare state modeled after destructive, radical socialist principles.

It is not without merit to compare the scope of this agenda to what Hugo Chavez did to Venezuela. For sure, the socialists in the Democrat party firmly believe that any such comparison lacks merit - after all, they know how to do socialism right - but those are the facts. It is not difficult to demonstrate the lineage from Venezuela back to Greece, to Sweden, and to the United States today; that lineage has two parallel tracks, one ideological and one economic.

I have pursued the economic track in multiple writings over the years, from my 2014 book on the European economic crisis to my two-part paper last year about the relevance of the Greek crisis to our current state of affairs here in America. I have, naively, believed that such analysis would win support and gain traction among Republican pundits and policy makers, but I have - reluctantly - come to the conclusion that they are immune to the economic analysis.

After a period of searching for the reason why this is so, I began to realize that the reason is as simple as it is brutal. The Republican party leadership - and its followers within the right-of-center intellectual environment - is convinced that the welfare state is not the problem that facts and economic analysis suggests. They are, in fact, convinced that they can run the welfare state better than the left can.

This belief has a distinct origin, that I decided to trace down. Digging through a fair amount of literature on neoconservatism, I found it - and what a find it was.

Before I get there, let us review a chart I have published previously. It reports the annual growth in current-price federal government spending, broken down by presidential term: 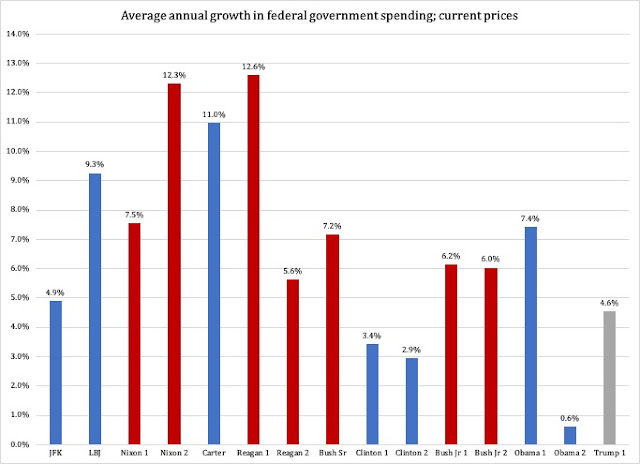 The 14 presidential terms from Kennedy through Obama were split evenly between Democrats and Republicans. On average, Democrats increased government spending by 5.6 percent per year.

Republican presidents, by contrast, grew spending by 8.2 percent. Not only that, but they signed bills that made some significant additions to our welfare state, such as the creation of the EITC under Nixon, the growth in Medicaid under Reagan and the expansion of Medicare under Bush Jr. All this seems incomprehensible if one assumes that the Republican party leadership does indeed have a different view of socialism and the future of our country, than do Democrats.

Sadly, the difference is negligible. And I do not use the word "socialism" lightly. It is not a term to be thrown around in punditry; it is a term with a profound, distinct meaning, with direct bearing on the expansion of the American welfare state.

Socialism, namely, is about economic redistribution. It is often claimed that socialism means government ownership of the means of production; that is neither a necessary nor a sufficient condition for whether an economy is socialist. Some governments socialize the means of production - corporations, for short - because they think it helps them achieve the real goal: a complete elimination of economic differences between citizens.

In other words: full-scale egalitarian redistribution of income and wealth.

The welfare state is a key instrument for this purpose. Its method for reducing - and eventually eliminating - economic differences is taxation (preferably highly progressive) and spending on entitlement programs:

the faster it accomplishes its goal of eliminating economic differences between individuals.

The War on Poverty represented a tectonic shift in this direction in the American welfare state. It changed the basis for how government provided services, from poverty relief to income redistribution. However, it did not go all the way with universal provision; its focus was still on reducing economic differences between American families, but unlike the pre-War on Poverty welfare state, the ambition was to do it permanently, and to do it for people who were otherwise providing for themselves through full-time work.

In other words, with the War on Poverty - or, as Lyndon Johnson referred to it, the Great Society - a redistributive, egalitarian welfare state replaced the social-conservative welfare state that emerged from Franklin Roosevelt's presidency. What remained was the completion of it in the form of universal, all-encompassing entitlement programs.

We are now on the doorstep of that completion. Democrats want it, in the form of the agenda that Bernie Sanders, Alexandria Ocasio-Cortez and others are proposing.

Interestingly, the Republican party also wants this, and their motives for it can be traced back all the way to Irving Kristol and his neoconservatism.

Kristol's acceptance of the welfare state as a legitimate, even desirable project stands on two pillars. The first is his conclusion (not well motivated, but still) that free-market capitalist societies lack a common cause to rally around. There is, he says, no fraternity, no sense of belonging together, among people in capitalist societies.

He even chastises capitalism for being nihilistic.

The second pillar is well captured in his observation of how weakly conservatives tend to defend free-market capitalism. Egalitarians have been successful in advancing their political agenda because,  Kristol says, there is no ideological passion ont the right:*

though ordinary people are not significantly impressed by their assertions and indignations of egalitarian rhetoric, they cannot help but be impressed by the fact that the ideological response to this accusatory rhetoric is so feeble. Somehow, bourgeois society seems incapable of explaining and justifying its inequalities and how they contribute to or from are consistent with the common good.

Kristol does not want to explain inequalities (let alone discuss the concept itself) but does instead propose a role for government that, when put to work in actual policy reform, completes the construction of the egalitarian welfare state.

Kristol's fellow neoconservatives were highly influential under three Republican presidents: Reagan, Bush Sr. and Bush Jr. Their legacy is still alive in leading Republican circles and strongly informs GOP policies today. The best representation of this influence is found in Kristol's essay Social Reform: Gains and Losses where he declares that the reforms under the Great Society banner were inadequate:

One wonders what would happen if all the money spent on Great Society programs had been used to institute, in however modest a way, just two universal reforms: (1) children’s allowance … and (2) some form of national health insurance? My own surmise is that the country would be in much better shape today. We would all – including the poor among us – feel that we were making progress, and making progress together, rather than at the expense of one another.

He then provides a declaration of ideological intent:

Social reform is an inherently political activity, and is to be judged by political, not economic or sociological, criteria. When I say social reform is “political”, I mean that its purpose is to sustain the polity, to encourage a sense of political community, even of fraternity. To the degree that it succeeds in achieving these ends, a successful social reform – however liberal or radical its original impulse – is conservative in its ultimate effects. Indeed, to take the liberal or radical impulse, which is always with us, and slowly to translate that impulse into enduring institutions which engender larger loyalties is precisely what the art of government, properly understood, is all about.

This is nothing short of a battle cry for the creation of a welfare state of Scandinavian proportions. Kristol believes that it is government’s role to gradually create “enduring institutions” where all citizens, on equal footing, are beneficiaries. His mention of a single-payer health insurance program is symptomatic; add to that single-payer child care, tax-paid college for all and government provision of a universal income guarantee (we know its primitive seed as "paid family leave"), and we have the most comprehensive welfare state a socialist could wish for.

Neoconservatives have a different ideological motive for this welfare state, than the egalitarian goal pursued by socialists. Theirs is, as Kristol explains, to “encourage a sense of political community, even fraternity.” Thereby, the welfare state fills the social void that he sees as inherent and endemic in free-market capitalist societies. It is ironic that his path to get there is carved out straight through the heartland of socialism.

Today's Republican leaders have been led to believe that the socialization of people's needs in the one end, and their income (for tax purposes) in the other end, is not a form of socialism. So long as they continue to believe that; so long as they continue to accept the neoconservative notion that government can indeed provide for people's needs - only that they can do it more efficiently - we as a country are going to continue our sleepwalk straight into the dungeon of socialism.