With the election earlier this month, a new crop of socialists were given seats in Congress. In a recent interview with Maria Bartiromo on Fox News, Congressman Liz Cheney, now the number three Republican in the House, pointed to the radical agenda that these socialists will want to push. While she exaggeratedly compared it to the Soviet Union, she made the right call in casting this new wave of younger Democrats as politically outside the American mainstream.

Nevertheless, they are in Congress and they will have influence on the direction in which the new Democrat House majority is going. As socialists always do, they will advance their agenda whichever way they find necessary, to get wherever they want to get. To their aid, they have an arsenal of intellectual weaponry, spanning a wide spectrum of subjects that can be of help in their advancing their political agenda.

In two installments, we are going to look at two excerpts from that spectrum. Four examples illustrate how a political agenda corrupts scholarly endeavor, degrading it from pursuit of knowledge qua knowledge, to pursuit of knowledge as a tool for the advancement of an ideology. They have nothing in common per se, but all share the same character trait of degrading scholarly thought to an instrument for politics.

This article discusses two of them; the other two will be dealt with in the second installment.

Before we get to the first example, let us acknowledge that it was free, independent pursuit of knowledge - often in the face of political headwind - that led to the rise of Western Civilization. It was in the academic hallways of late Medieval Europe where the first elements of our modern, free world were discovered and formulated. Many a hallmark along the path to our current freedom and prosperity have emerged from academia.

That does not mean academia has not been the scene of political corruption throughout history. One of many examples from the history of scientific thought is the controversy over the terracentric theory of the universe. Prior to modern astronomy, the prevailing wisdom was that Earth was the center of the universe and the sun, the planets and the stars revolved around her. When empirical evidence, made possible through scientific advancements in astronomy, challenged that view, suggesting instead that Earth revolved around the sun, political and academic leaders banded together to defend the old paradigm at any cost. Not only were heliocentricists branded as heretics, but scholars on the terracentic side of the issue began inventing new components to their theory in order to defend it.

Among the best ones - from a creative viewpoint - was the hypothesis of retrogressive planetary orbits. It stated that planets, instead of orbiting Earth in a circular fashion, made wild, complicated loops. In other words, instead of the standard terracentric view that academic scholars had for a long time, where the world revolved around our planet... 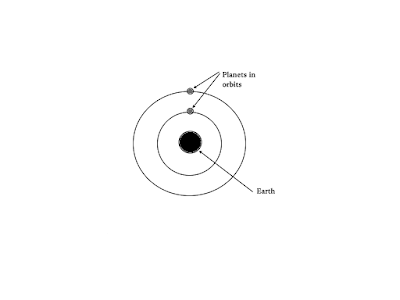 ...the academic mainstream - aiming to preserve their influence in terracentric-minded political circles - tried a new version never before seen in scholarly thought: 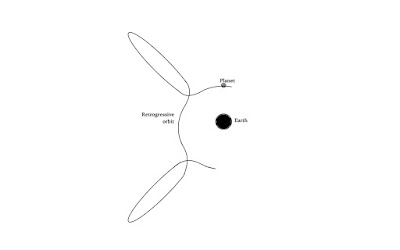 This amendment to the terracentric theory did, of course, not withstand much scrutiny. In reality, it turned out to be the last straw that its defenders grasped for in order to hold on to academic influence and prominence, built over many years of peddling a false theory. The heliocentric world view broke through, and with it a scientific revolution the fruits of which we can still harvest today.

Sadly, modern scholars generally are not very well versed in the history of scientific thought. If they were they would know better than to repeat this historically embarrassing mistake. They would certainly have studied Thomas Kuhn's writings on scientific revolutions and learned how to be humble and focused on scholarly knowledge for its own sake.

Instead, our academic institutions - again speaking generally - have been perforated by political punditry and ideological agendas that increasingly define what questions and answers modern scholars decide to pursue. This has become an epidemic in the humanities and social sciences, but natural sciences are not immune, not by a long shot.

Nowhere is this more apparent than in the field of so-called climate research. One would think that Climategate back in 2009 would have kicked runaway politics out of this academic field, but that has not happened. Even though the UN panel on "climate change", known by its acronym IPCC, admitted back in 2009 that they were operating with fraudulent data, they are now at it again. This time they are not manipulating data to get the results they want, but the very methodology behind their data collection. From the Climate Change Dispatch:

The IPCC appears to have secretly changed the definition of what constitutes ‘climate’ by mixing existing and non-existing data. The definition of ‘climate’ adopted by the World Meteorological Organisation is the average of a particular weather parameter over 30 years. It was introduced at the 1934 Wiesbaden conference of the International Meteorological Organisation (WMO’s precursor) because datasets were only held to be reliable after 1900, so 1901 – 1930 was used as an initial basis for assessing climate. It has a certain arbitrariness; it could have been 25 years.

The 30-year time series is also a standard for anyone working with data, as a minimum of observations of a variable before you can identify reasonably reliable trends from it. In other words, so far so good. But what was that about secretly changing the very definition of the variable they are observing? The Climate Change Dispatch again:

For its recent 1.5°C report, the IPCC has changed the definition of climate to what has been loosely called “the climate we are in.” It still uses 30 years for its estimate of global warming and hence climate – but now it is the 30 years centered on the present. There are some obvious problems with this hidden change of goalposts. We have observational temperature data for the past 15 years but, of course, none for the next 15 years.

This is a direct violation of the very first rule in empirical research: never mix apples with oranges. The variable "climate" is one and the same throughout 15 years of historic observations; the variable "climate" for the next 15 years does not exist. Therefore, in order to use it the climate "researchers" have to invent - create, fabricate - the observations they want to use.

Please note that this is not a traditional forecast of a variable. Forecasts, which are used in, e.g., economics all the time, start "today" and look into the future. They are made under the explicit premise that the numbers it produces are constructions based on non-existent empirical data. The only tie back to empirics is through the theory and empirical models used for forecasting, an often dicey process full of pitfalls for those who endeavor into it.

In fact, the notorious inability of economists to predict recessions is case evidence that forecasting in itself is not to be taken lightly, even when based on trends extracted from historic data. Without comparing economics to climate research, the methodological problem is the same: history is an imperfect predictor of the future.

There are good examples of economic forecasting that has been corrupted by desires among politicians and politically biased economists to reach certain conclusions about the future. One of the most egregious examples is the failure of the economists at the International Monetary Fund (IMF) and others to foresee the economic disaster in Greece (a subject that requires an article of its own). Their faulty forecasts led the IMF, the European Union and the European Central Bank to unintentionally crush the Greek economy under an unforgiving boot of austerity.

Needless to say, faulty climate forecasts can have similarly disastrous effects if allowed to determine the course of economic and other policies. But the problem with the IMF's redefinition of "climate" is not limited to faulty or careless forecasting: they are redefining the world as they claim it looks here and now, today, based on observations of a non-existing future.

Suppose you go to the bank to get a loan. You present them with paychecks from your last six months, but that is not enough money for you to get the loan. Therefore, you add six months' worth of future paychecks as you predict they will be. You then call this "the income I have" (mimicking the IPCC's definition of "the climate we are in"). Would the bank give you a loan?

As the Climate Change Dispatch points out, the absence of data is never a problem

for inventive climate scientists. Global warming is now defined by the IPCC as a speculative 30-year global average temperature that is based, on one hand, on the observed global temperature data from the past 15 years and, on the other hand, on assumed global temperatures for the next 15 years. This proposition was put before the recent IPCC meeting at Incheon, in the Republic of Korea and agreed as a reasonable thing to do to better communicate climate trends.

This is nothing short of a politically motivated alteration of scientific inquiry to fit a set of pre-determined conclusions. In its disregard for the standards of scholarly research, it is as corrupt and disingenuous as the theory of retrogressive orbits.

We have already seen a slew of government regulations and legislation motivated by so-called climate research. Some of it has been harmless, but as the frenzy of the fraudsters intensifies, so will the consequences of the lawmaking based on their dishonesty.

Unfortunately, as we will see in the next installment, political corruption of scientific inquiry is not limited to the natural sciences. The aforementioned Greek economic disaster is just one example of what political corruption does to scholarly work in the social sciences. By comparison, without taking anything away from the suffering of the Greek people, the disaster in their country is light and limited compared to what others have endured, courtesy of politically corrupt scholars.
at November 25, 2018