I recently explained that the so-called tax scandal of the century really was nothing more than the expectable consequences of bad government regulations and unbearable taxes. While media keeps their spotlight on this non-event, a real European tax scandal is unfolding right before our very eyes.

In an October 23 document, the EU Commission – the executive branch of the European Union – published a document that, explains EUObserver, calls for unionwide tax powers and further crackdown on so-called “tax avoidance”:

The commission, earlier this year, pointed the finger at Belgium, Cyprus, Hungary, Ireland, Luxembourg, Malta, and the Netherlands, where it said sweetheart deals may have enabled multinational companies to cut their tax bills aggressively. The finance and taxation commissioner, Pierre Moscovici, said, at the time, that tax rules in those seven countries "have the potential to undermine fairness and the level playing field in our internal market, and they increase the burden on EU taxpayers". Some multinational companies have made extensive use of Ireland and other EU countries to shift profits and avoid taxes. With this initiative, the commission aims for faster adoption of proposals.

To facilitate changes to EU tax law, the Commission wants to take away the veto power of individual member states. In its Work Program 2019, the Commission explains that it intends to increase “the use of qualified majority voting and allow more efficient decision-making in key fields of taxation and social policies.”

There is no doubt what this means in the real world: a tax cartel stretching across the European Union, aimed at removing the possibility of tax competition between EU member states. It is only the latest in a long campaign by the EU against low-tax jurisdictions. In 2015, Dan Mitchell exposed a black list, produced by the EU, of what it considered to be “the world’s 30 worst-offending tax havens”. In January 2018 I followed up on that analysis, reporting in the January 2018issue of the Cayman Financial Review:

The European Union has created a new kind of blacklist of 17 jurisdictions, and a “watch list” of another 47, branded as “tax havens” or “noncooperative” countries and territories. This list, which has been long in the making, vilifies countries and territories for no other reason than providing residents and investors with low taxes and financial privacy.

I also noted that EU member states were clearly in the EU Commission’s target zone:

Several countries aspire for the title as Europe’s highest-taxed nation. Norway, Finland and Belgium are trying to prove that when it comes to taxes, the sky is the limit. Ireland and Romania are pulling in the opposite direction, establishing themselves as Europe’s own low-tax jurisdictions. In Romania, a 2005 tax reform substantially reduced income taxes from a progressive tax with a 40-percent top rate to a 16-percent flat rate. Corporate “profit taxes” were cut from 25 percent to 19.

At the time, the Romanians were planning another tax cut.

With its new initiative, the EU is seeking to force feed its high taxes to every country under its boot. According to Eurostat, in 2016 the average rate for the EU was 44.6 percent. Where is it going to be when the EU gets to force-feed high taxes down the throats of Europe's lower-taxed nations? Irish taxes take 27 percent of their GDP. In Romania the ratio is 31.9 percent, with 34.4 percent in Lithuania, 35.3 in Bulgaria and 37 in Latvia.

How high will taxes go in these countries? For comparison, a total of eleven EU states had a heavier tax burden than the EU average, with Finland, Denmark, France, Sweden and Belgium taxing away more than 50 percent of GDP.

Variations in taxes in the European Union are the result of different policies regarding economic redistribution. It may seem like a redundant point to make, but the reason why we have taxes in the first place is that we have decided to spend money through government. The bigger government gets, and the more permanent its spending programs get, the higher and more burdensome our taxes will be. In other words, when the EU wants to defend its high taxes, the real objective is to defend large egalitarian welfare states that redistribute money between private citizens: 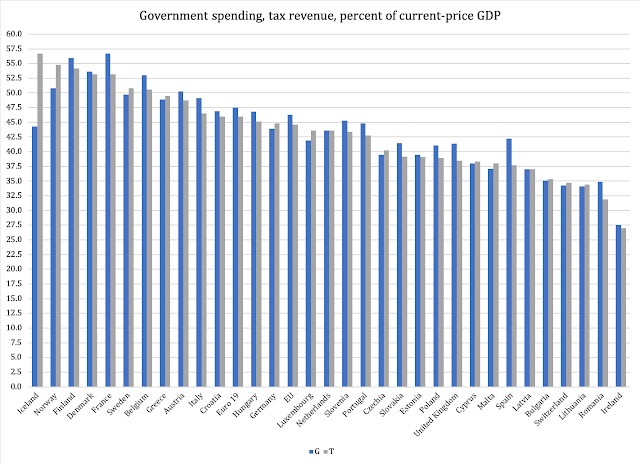 Europe is suffering under its increasingly aggressive high-tax cartel, but it is also paying the price for its own welfare statism. This new EU Commission initiative only reinforces the price to be paid for that ideological choice; as the European economy continues to sink under the weight of the world's highest taxes, that price tag will increase exponentially. What lies ahead is a hinterland of economic stagnation and industrial poverty.

The only silver lining in this is the fact that the EU Commission has made its intent known way in advance of the planned implementation date in May 2019. Investors who are concerned about the harm of high taxes and economic stagnation, will have time to rearrange their portfolios.

Unfortunately, Europe’s middle class does not have that option. They will be the big losers as the Eurocrats in Brussels get ready for yet another tax attack on the forces of economic freedom and prosperity.
at October 29, 2018