More on local governments in a coming article; for now, let us take a closer look at the state level.

To begin with spending, the 13-percent allotment of combined state and local government spending tp core functions worsens when we isolate the state level. On average, state governments spend only 8.2 percent of their budgets on public safety and transportation.

It could be countered that public safety is, and should be, primarily a local government responsibility. This is a good point, but let us keep in mind that this is a percentage: if the states do not have to spend a lot of money on public safety because counties, cities and towns do it better, there is nothing that says they should spend more money on other functions instead.

Which, as it happens, is what they do. If we add together Education, spending on Social Services and Income Maintenance, and Housing - the three welfare-state spending categories in state budgets - these three categories gobble up an average of 46 percent of state budgets. The welfare-state spending share varies quite a bit, and the ranking of individual states might come as a surprise: 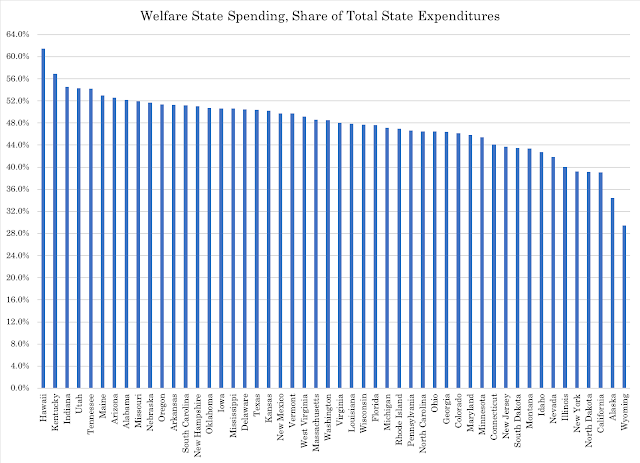 Let us keep in mind, again, that states distribute spending responsibilities differently between the state and local governments. Overall, though, the fact that states use almost half their budgets, on average, for the purposes of economic redistribution is a sign of how entrenched the welfare state has become.

While we are talking about spending priorities, it might be worth noting that states are relatively frugal when it comes to general government administration, but that there are some weird priorities being made. Administration claims the most in Montana (6.0 percent of total spending), Alaska (5.6), Delaware (5.5), Wyoming (5.0) and Connecticut (4.8). Its share is lowest in Michigan (1.3), Texas (1.4) and Illinois (1.5).

Fortunately, there are states that strike a more reasonable balance between the two. Michigan only spends 34 cents on general government administration for every dollar on public safety. Texas is a close second ($0.39) followed by Nebraska (0.46).

In addition to administration, states spend a growing amount of taxpayers' money on debt: the cost of interest on state debt varies a great deal, much like administration costs, but in doing so it is beginning to compete with other expenditures. For example,


The highest costs of debt interest, as share of total state spending, are in:

On the revenue side, the biggest problem is state dependency on the federal government. Over time, federal funds have become of increasing importance to states. This dependency is directly traceable back to the expansion of spending programs, created by Congress, that give states the responsibility for running the programs while Congress maintains a funding responsibility. I recently pointed to this problem in an article for the Center for Freedom and Prosperity, but it deserves a lot more attention than it gets.

According to the 2016 state finance data from the Census Bureau, states collect on average 29.1 percent of their revenue from the federal government. Taxes are responsible for 43.1 percent. However, there are states where these two revenue sources actually compete for the top spot. Five state governments actually collect more money from Uncle Sam than from their own taxpayers:

In these states, it is at least questionable to what extent the state government is accountable to its own taxpayers, or to Congress. The trend, namely, is that the less important federal funds are to a state's revenue, the more it relies on what its own taxpayers can deliver. Figure 2 groups states in quintiles, showing the average share of charges and fees, taxes and federal funds, of total state revenue: 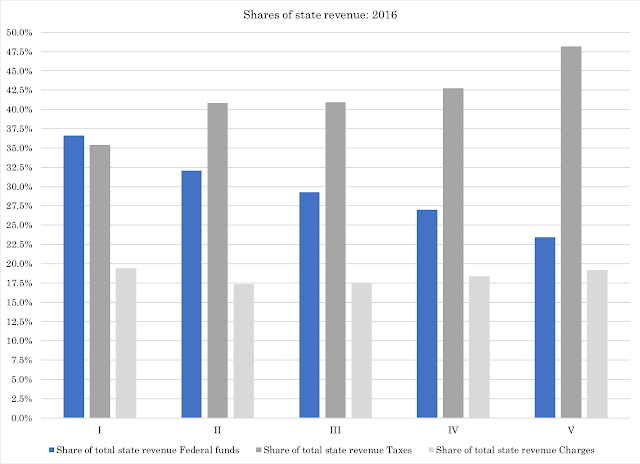 Overall, taxes pay for a widely different share of state spending depending on state:

Next, we will take a look at local governments. After that, it is time for some longer-term trends. However, there will be other articles in between. Stay tuned, and don't forget to listen to Larson's Political Economy on blog talk radio! Next show is tomorrow Thursday at 8PM ET / 6PM MT!