The bone-dry title of this blog is probably not going to excite many readers, but there is a great deal to be learned from examining the finances of our states and local governments. The Census Bureau has just released its 2016 data for state and local government finances. This is an exciting read; for example:

Starting with the spending side, the profile of state and local government outlays is strikingly similar across the country: 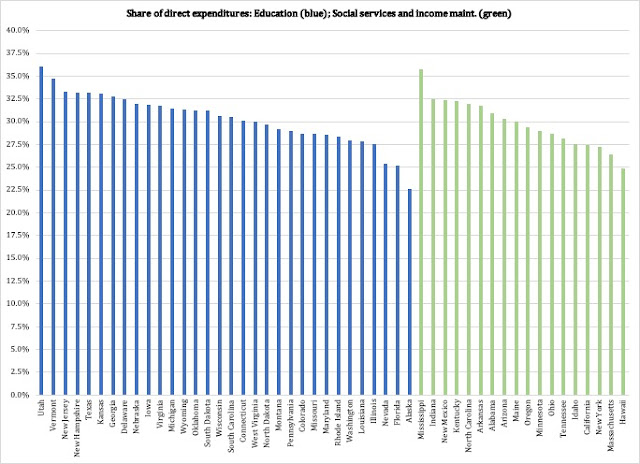 Social Services and Income Maintenance (SI) is a spending category with many items on its plate. The first, public welfare, gobbles up 69 percent of the spending on average; spending on hospitals comes second with 20 percent, with health in third at ten percent. The two remaining categories are Employment Security Administration (0.4 percent) and Veterans' Services (0.1).

The states vary in how they distribute their SI spending, but most states put the bulk of their outlays on welfare programs. In 34 states, welfare accounts for two thirds of SI spending; in 47 states it is responsible for more than half of the total SI budget.

There is an important point in these numbers. It is not the case that the public welfare programs provide relief for the poor; most of the spending is actually directed toward people with jobs. The American welfare state is not designed as a poverty-relief system, but purposely constructed to redistribute income from higher income earners to people with lower incomes. As a result, SI continues to grow when the economy does better - quite the contrary to what many people expect.

In other words, expect an even stronger focus on SI spending over time.

On average, hospital spending is the second largest item under SI, with $1.90 being spent on hospitals for every $1.00 spent on health care. In 38 states, hospital spending exceeds health care spending, with Wyoming at the top. The Cowboy State is the only one where a majority of SI spending, 50.8 percent to be exact, goes to hospitals. This does not mean that Wyoming is particularly stingy with either health care spending in general or public welfare; it is the result of a creeping government takeover of the hospital sector in Wyoming.

Health care spending, in turn, is primarily the state contributions toward Medicaid. Vermont tops the league with 18.1 percent of SI spending going toward providing health care for enrollees in state-funded health insurance. Michigan is second (16.8) followed by North Carolina (16.5), Delaware (16.0) and Arizona (15.9).

On the education side, on average 64 percent of state and local government education spending is for K-12 spending. Of that money, in turn, 9.3 percent is for capital outlays, in other words school construction. Here again, Wyoming stands out, spending 22.5 percent of its state-and-local K-12 budget on school construction. North Dakota is a close second at 22 percent: the state that comes closest is Kansas at 17.1 percent. 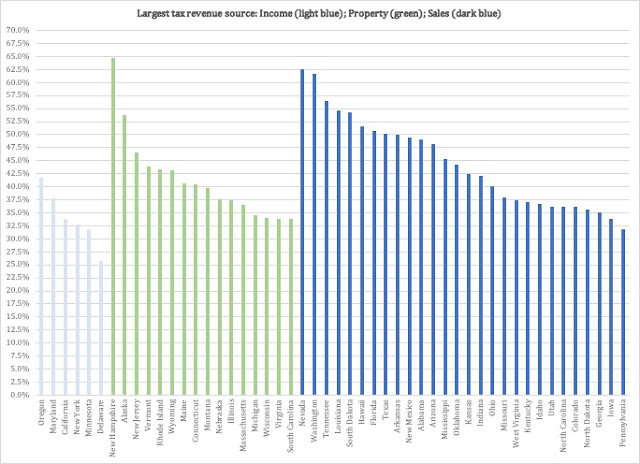 The sales tax is the most important tax revenue source in 28 states, while property taxes dominate in 16 states. Only six states rely primarily on the personal income tax.

Corporate income taxes do not contribute very much for state and local governments. The highest tax revenue share is in New Hampshire at 10.9 percent, followed by Alaska at 7.5 percent.

Overall, the revenue composition is such that states and local governments depend primarily on tax revenue, and secondarily on federal funds, to pay for their expenses. In 49 states, taxes provide the largest share of total revenue; the exception, Alaska, relies primarily on federal funds (26.9 percent) and only secondarily on taxes (24.3 percent). In 45 states, federal funds are the second most important source of revenue, the exceptions being

The balance between tax revenue and federal funds will shift to the disadvantage of taxes when we look specifically at the states.