As I reported recently, the Trump economy is moving along nicely. Growth rates are not as spectacular as some would suggest, but the trend is steadily upward with gradually higher growth rates and steadily better employment figures.

Despite the strength that the U.S. economy has shown over the past year, I have been skeptical about its growth potential. The fact that annual growth has not yet parked itself above three percent is one reason for that skepticism; another reason is the changes in business investments that I recently pointed to:

--the declining share of gross savings vs. spending on gross fixed capital formation, suggesting increased debt vs. operating capital in U.S. businesses; and
--the rising rate of capital consumption vs. fixed capital, indicating a capital stock that is on faster turnover.

The second point is not necessarily a problem given that investments in equipment and, especially, intellectual property products, IPPs, (primarily computer software) are growing notably faster than investments in structures. Since IPPs grow obsolete much faster than structures, this can explain at least part of the rising turnover rate of the capital stock. To further drive home this point: in the past ten years, businesses in America have invested almost $8.2 trillion more in IPPs than in structures.

That said, the higher turnover rate indicates a more short-sighted philosophy behind gross fixed capital formation. It is easier to move business operations with shifting macroeconomic and microeconomic conditions, and to increase or decrease current investment spending depending on economic growth, regulations and tax policy.

Given the shifting nature of business activity, and the sluggishness of the economy to break through the three-percent growth barrier, it is encouraging to see some positive long-term trends on the U.S. labor market. In addition to the low unemployment rate - in itself a great achievement in light of the protracted stagnation under the Obama administration - Bureau of Labor Statistics payroll data show two noteworthy trends.

The first is aggregate - total - weekly payroll in the private sector. After its deep decline during the Great Recession, the recovery fluctuated considerably through 2016. Since then, though, it has shown both a decrease in fluctuations and a trend that is not only positive in terms of payroll growth, but increasingly positive in that the growth rate is steadily on the rise. The trend line represents a 12-month moving average: 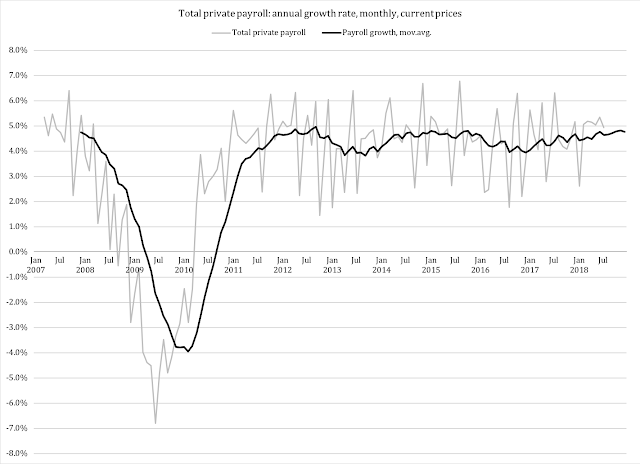 The trend is more clearly visible in the growth rate in weekly average earnings. After having fluctuated for several years, the growth in current-price average earnings in the private sector have been on an upward trend since at least early 2017: 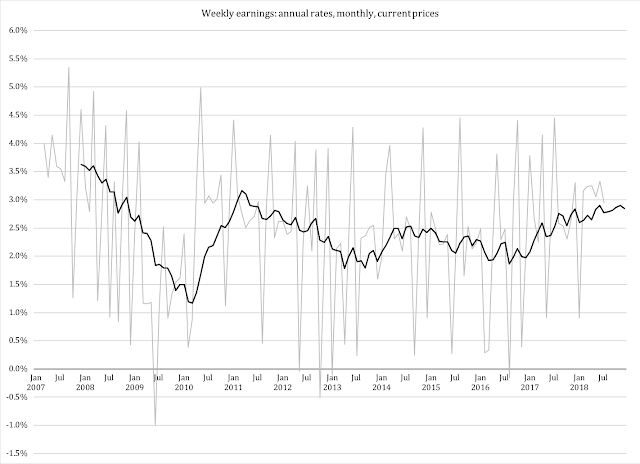 A breakdown of the growth in weekly earnings between hourly wages and hours worked shows that on average, wage growth is responsible for rising earnings. The number of weekly hours worked has not changed much over the past ten years. Using July as an example, in the private sector the weekly average was barely one percent higher in 2018 compared to in 2006:

In the aggregate, American workers are doing well under Trump. There are differences between industries and age groups, but the overall trend is clearly positive. This is encouraging for the coming year: strong household earnings feed back into the economy through consumer spending. There is a good chance that the economy exceeds three percent growth on an annual basis during the second half of 2018.
at September 04, 2018