How Does Europe Pay For Its Welfare State?

It is well known that European countries almost without exception have higher taxes than America. In an article for the Foundation for Economic Education, Dan Mitchell of the Center for Freedom and Prosperity explains that those taxes are particularly burdensome for lower income taxpayers.* There are two reasons for this, one being that that the Europeans have run out of rich people to tax. The other is easily explained by the economic theory behind the Laffer Curve:

Why are European governments pillaging lower-income and middle-class taxpayers instead of going after the “evil rich” and “greedy corporations”? Part of the answer is that there aren’t enough rich people to finance big government. But the most important factor is the Laffer Curve. Politicians can impose higher tax rates on upper-income taxpayers and companies, but that doesn’t necessarily translate into higher revenue. Simply stated, well-to-do taxpayers have considerable ability to earn less income and/or report less income when tax burdens increase, and they do the opposite when tax burdens decrease.

This is a great point. It is also worth noting that when economic growth is suppressed under high taxes, more people are trapped in low-to-middle income brackets. There is less economic mobility upward, partly because businesses cannot give raises the way they could in a thriving economy, and partly because a slow-growing economy does not have as much need for high-skilled professionals as a growing economy does. Entrepreneurship, another way to high earnings, is also less profitable.

Making lower-income earners pay for the welfare state they use is, of course, fair. The problem is that in a slow-growing economy, they really don't provide much of a tax base anyway. And the European economy is indeed plagued by slow growth: as we saw during the Great Recession, Europe's welfare states had enormous problems paying for all their entitlement promises, especially when scores of their taxpayers were hurled out of the job market and into the ranks of the unemployed.

The growth problem remains. I recently compared Europe's economic stagnation to the reasonably well-performing U.S. economy, and my conclusion was that America is doing better because with "a larger private sector, the U.S. economy is less vulnerable to inefficient government spending and taxes". That does not mean we are free of problems - far from it - but we are at least not in nearly the same bad shape as Europe is in.

So how, then, do the European welfare states compensate for the loss of the wealthy and the loss of economic growth? Stagnant income among the workforce means stagnant domestic spending, hence slow to no growth in the broader tax base.

The plain, simple and brutal answer is that they have returned to old-fashioned mercantilism. We know it as "exports". By aggressively promoting exports, they have been able to enjoy at least some growth despite the stagnant nature of domestic spending. When exports grow, so does the part of the economy that lives off foreign markets; the welfare state can tap into new sources of revenue, seemingly without having to worry about the negative effects of high taxes on the domestic side of the economy.

Europe's reliance on exports is clearly visible in national accounts data. Starting with Sweden - a country on its way straight into a major crisis - the latest Eurostat numbers show that exports are now more important to the economy than private consumption:** 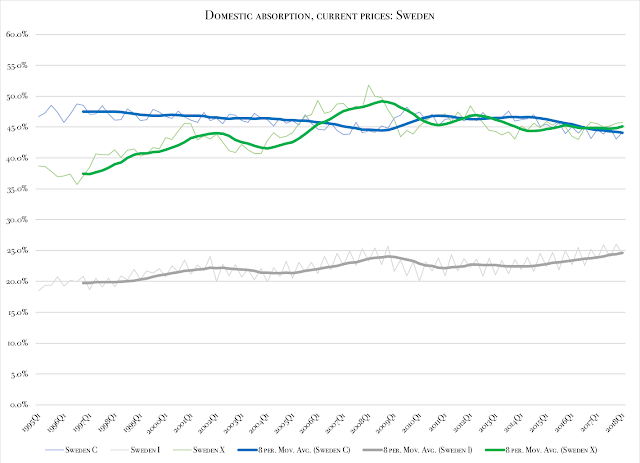 When a country exports more, it compensated by importing more or reducing domestic spending. In the Swedish case, the compensation has come in the form of a slow decline in private consumption as share of GDP. This is not a good sign, as it means that households in the economy are not doing very well economically.

It is worth noting that gross fixed capital formation, a.k.a., business investments, have been ticking up recently as share of GDP. This correlates to the steady performance of exports, with investment capital allocating to the one part of the economy that is not dependent on a stagnant, over-indebted domestic market. 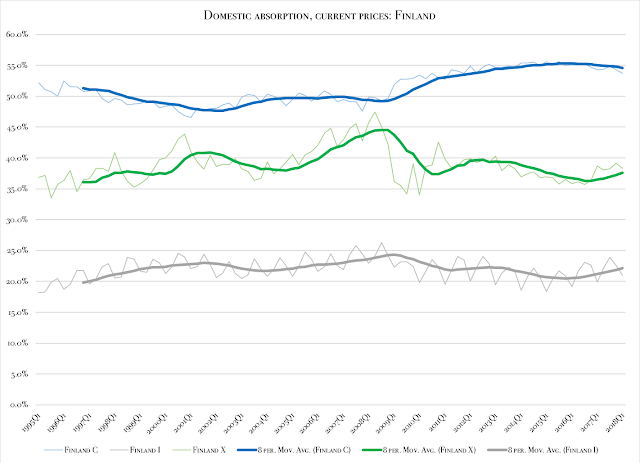 Denmark, on the other hand, which constantly competes with Sweden for the spot as the highest-taxed economy in the world, has an even more pronounced problem with relying on exports for their growth: 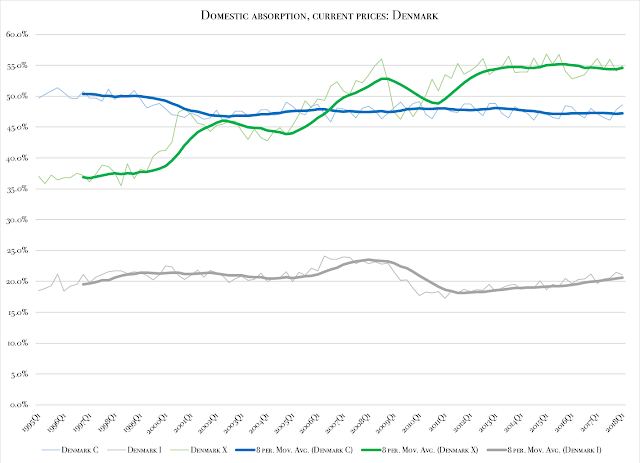 Europe as a whole is steadily becoming more dependent on exports, with a steady decline in the relevance of private consumption: 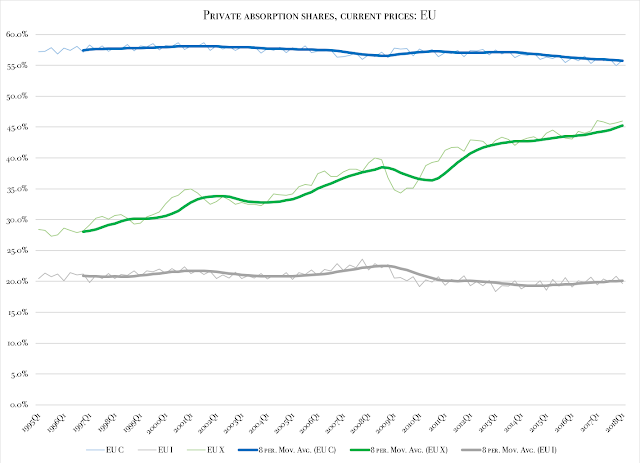 For comparison, the U.S. economy is doing well, with a steadily higher level of private consumption and a notably lower reliance on foreign trade: 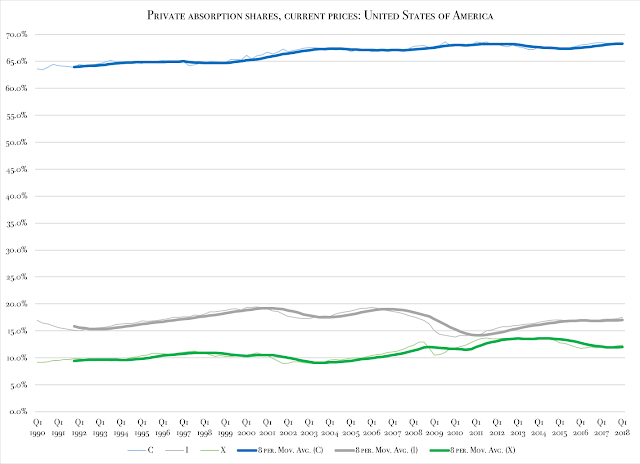 It is worth noting that U.S. businesses have also grown more dependent on exports over time. Since the mid-20th century, they have doubled the share of their profits earned abroad. That said, the share of exports in our economy is much smaller and its relative growth over time does not take away anything from private consumption.

To put this in different terms, the primary purpose of the U.S. economy is to satisfy the needs of the American people, while the Europeans spend an increasing share of their resources on satisfying the needs of people in other countries. This is especially true for Sweden and Denmark, the two costliest welfare states in the world.

One last point: nobody should interpret this article as suggesting that America can expand its welfare state to European levels, tax the heck out of people (to use one of Obama's favorite lines) and just pay for it with massive exports. Not even businesses that sell most of their products on the global market can survive forever under heavy taxes. The fact that the European economy is still slow to grow, despite high reliance on exports, speaks volumes about the inevitable decline that awaits any country foolish enough to pursue the egalitarian project to the end.
---
*) Full disclosure: I am an associate scholar of the Center for Freedom and Prosperity. Click here to read my articles for the Center.
**) A technical note. So long as imports are not deducted from exports, the sum total of the four spending categories consumption (C), investments (I), exports (X) and government (G) spending can add up to more than 100 percent of GDP. The reason is that domestic production, GDP, and imports together account for all the resources that are absorbed in the economy. They, too, can therefore add up to more than 100 percent of GDP. At the end of the day, though, the two sides, GDP plus imports and C+I+X+G, must always add up to the same amount.
at August 21, 2018