As I explained in the first installment of "Fiscal Crisis in America" for the Center for Freedom and Prosperity, we are now at a point where a Greek-style budget meltdown here in the United States cannot be ruled out. The focus of my analysis is primarily on the federal government and its chronic deficits and structural bias in favor of entitlement spending. However, a sizable portion of our welfare state is funded and operated by our states; since the welfare state is the root cause of our structural budget problems, consequently our state governments are running chronic deficits as well.

Reports Fox Business:
With my apologies to the German poet Martin Niemöller...:

Now back to the Fox Business story:

The root cause, again, is structural over-spending over several decades. Unfortunately, this fact does not seem to be apparent to many people who participate in the conversation over the unsustainable fiscal situation in the states. Fox Business again:
From a strictly technical viewpoint, this is a pension debt crisis. However, the pension debt is caused by the simple fact that government has a lot of employees. Government needs a lot of employees, in turn, because we ask government to cater to more and more of our needs.

Furthermore, the overspending problem is much older than the unsustainable pension debt. Over the past 50 years, approximately, spending with focus on entitlements has grown steadily as share of state budgets. The core of this spending, called "government social benefit payments to persons", has increased from about eleven percent of current state expenditures in the early 1960s to approximately 27 percent today. 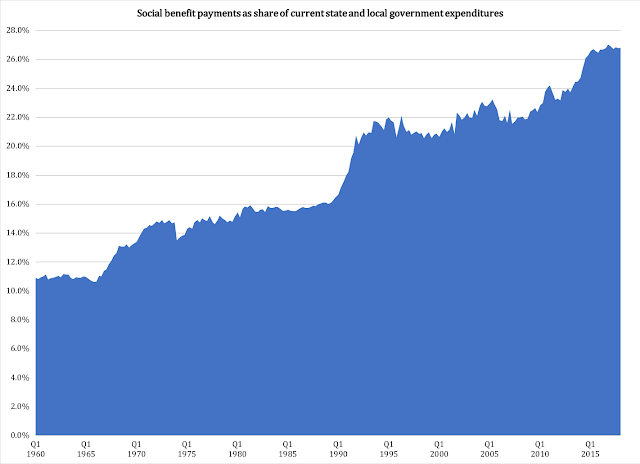 Adding other entitlement spending, the total welfare-state share of state spending rises to 50 percent. In effect, the welfare state now defines the purpose of state and local government spending. 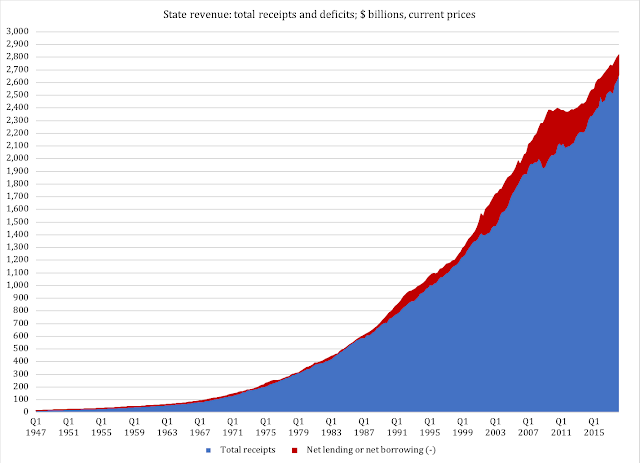 States have always borrowed money, as indicated by the tiny red topping on the blue segment all the way back to 1947. In the 1950s the total deficits of all the states exceeded ten percent of total expenditures almost without exception. In the late '50s borrowed money occasionally paid for more than 15 percent of spending.

Then the share fell, shrinking below give percent during the Carter and Reagan presidencies. This decline was preceded by a surge in state taxes as share of personal income:
Subsequent tax revolts made it harder for states and local governments to frivolously raise taxes. Most memorable is the property-tax revolt in California that shifted the state from a market-value base for property tax assessments to an acquisition-value base. However, since the tax revolts were never followed by spending reforms, government continued to grow. As a result, deficits started growing again: with the exception of two and a half years around the turn of the millennium, deficits have continuously paid for more than five percent of total state and local government expenditures since 1989.

Only significant reforms to roll back the egalitarian welfare state will bring our governments - on all levels - in fiscal balance again. Until that happens, we are at steadily increasing risk of a major, destructive fiscal crisis, just like the one I write about in my "Fiscal Crisis in America" series. Stay tuned for the second installment.
at July 27, 2018