They never quite got where they wanted. Economic realities and Herculean pushback from the remaining enclave of free-market capitalists in Sweden in the 1970s and early '80s brought an end to the final transition from indicative to teleological central planning.

Toward the end of the last century the central planning system in the Soviet empire collapsed. After a hard few years of turbulence, uncertainty and widespread corruption and cronyism, Russia landed on its feet and began rebuilding itself based on some sub-optimal hybrid between statism and capitalism.

China chose a more linear route from its old communist model to a more hands-off system. Today the leaders in Beijing are trying to combine the best of a state-governed economy with the best of capitalism. Their strategy of indicative planning instead of the heaviest-handed teleological version is not working: the Chinese economy is over-monetized, under-consuming and still suffering from heavy regulations. However, they have at least seen a more peaceful and, relatively speaking, more prosperous transition out of the old system than Russia did in the 1990s.

Central planning never works, either in its teleological form - where every microeconomic activity is regulated by government - or the indicative model applied under the Scandinavian-style welfare state. However, this does not prevent American socialists from singing its praise. Worse, though, is the fact that central planning is already being applied at a small scale, right in our own backyards.

Hundreds of people may be living in homes they’re not allowed to own in northeast Denver. That’s the latest revelation about problems with the city’s affordable homeownership program, which includes about 1,200 homes that are supposed to be sold to people with limited income, and only for certain prices.

This paragraph is a gem in itself.

Before we move on, let us recognize the obvious: if government makes it illegal for a certain person to buy a certain home, then if that person buys the home anyway, he breaks the law. This is the inescapable technical point that some people will bring up as a counter-argument to any discussion of government planning of home ownership. As an argument, it is as trivial as they can get in the logical sense of the word, without being meaningless.

Now, with that technicality out of the way, let us get into this pot-fumed story straight out of California Light, a story that makes us Wyomingites yearn for a wall along our southern border. The Denverite again:

city staff suspect that the rules are being broken on a broad scale, according to Derek Woodbury, spokesman for the Office of Economic Development: “We have identified approximately 300 affordable properties that are suspected of possibly being out of compliance,” he wrote in an email. About 1,200 homes are covered by the program in all.

The city of Denver started this program back in 2002 as part of an "affordable housing" campaign. In addition to the mandates that this program places on property developers to sell some houses much below market price - and only to people deemed low income - the program also could force homeowners

to sell their properties if they didn’t meet the income restrictions at the time of purchase. They could have to sell below market rate — even if that means they’re losing money.

Again, let us not get stuck on the practically trivial point that government bans certain citizens from buying and owning certain properties. The point here is not the legal side of this, but its domino effect of unintended, and increasingly absurd and economically harmful consequences.

At the forefront is the consequences that enforcement of this absurd central-planning directive will have on the lives of individual citizens. Homeowners can literally be forced to sell a home they own and have lived in for many years - and do it at a loss, at that. The impact that this will have on the lives of those families is almost unimaginable: it could literally wipe out a good part of a family's college savings or even retirement plan. People who have planned their finances responsibly could be hurled back into something akin to bankruptcy - by their own government.

It is important to note that these families, when they bought their house, may not even have realized that they were buying a house they were not supposed to own. The distribution of the "affordable" houses with owner discrimination attached to them, was known to government and, ostensibly, the developer. It is a rush to conclusion to even assume that the home buyers had any idea that their home had some kind of special status.

However, the Denverite explains that government itself appears to have allowed home purchases that its own law banned:

It’s unclear how this mess happened. Restrictions on the homes are supposed to be embedded in property documents and transferred with each sale. Each buyer is expected to have their income verified by the city — but that’s not always happening. “In my experience … the notion that this is an affordable housing unit was not discussed, and the buyer was not submitted to income verification, but it was submitted on the title commitment,” said attorney Robert McGough, who is working with some of the homeowners.

What is the point with centrally planning housing if government is not even going to stick to its own plan?

The point, of course, is not the reconfiguration of home ownership, but the virtuous policy itself. Elected officials who propose, craft and pass a law like this can go home to their spouses, out to their country clubs and off to their Sierra Club dinners and wear their virtue badge on their sleeve. For the vast majority of the people behind a law like this, it is really not more complicated.

A much bigger problem is the ideological sponsorship of this legislation. There is a dedicated core within these do-good circles whose goal is far more radical, far more destructive, than that of the virtue-craving majority. These are the "democratic" socialists whose explicit goal it is to replace today's United States of America with a "democratic" socialist ideal. That ideal, in turn, includes every bit of central economic planning that history has taught us to stay far, far away from.

Ideologues do not care about history. Their goal is instead to end history by creating their ideal society. If they cannot do it at the macro level, they will make it happen at the micro level. To this little clique, it is enough of a step forward - albeit a small one - to create home ownership planning in the city of Denver. According to the aphorism that many small creeks make a mighty river, the dedicated socialist will celebrate every little step in the direction he craves for.

As if to leave no mistake in which direction the city of Denver is moving on this issue, the Denverite continues:

Until now, Denver had only one employee dedicated to compliance in its affordable-housing programs. Now, the new leader of the Office of Economic Development is building up a team of people to enforce the rules. “Up until now, we have relied on the good faith of the original affordable home buyer that had to get approved as an affordable home, No. 2, on the real estate agents making the transaction, No. 3, on the title company,”said OED director Eric Hiraga. That’s “obviously not,” the approach going forward, he added. That might be cold comfort for the homeowners stuck with homes they’re not allowed to own.

Nor is it good news for developers who, in the future, will have to make sure they charge even more for all the homes they can sell on the open market, in order to make up for losses on the houses government forces them to sell at a price dictated by legislation. The price for a new-built home in Denver will continue to climb, leaving even more families out of the housing market.

Even though, at this point, there seems to be no indication that the city of Denver is expanding this program, it is a very good bet that they will. Once government starts socially and economically re-engineering society, it will try to do more of it, regardless of how disastrous the effects are. Therefore, we should expect the city to expand the share of new homes that developers have to sell at below-market prices. Here is what this will do to the market:

If the developer could put all his homes on the regular market, the supply curve would slope positively all the way down to the horizontal axis. However, the developer has to produce a segment of every subdivision he develops that goes into a secondary market. On that market, prices are dictated by government, making supply insensitive of market prices. Instead, supply is determined by the quota that government forces upon developers.

In other words, the "affordable" quota is part of total new-home supply as follows (proportions are exaggerated for illustrative purposes): 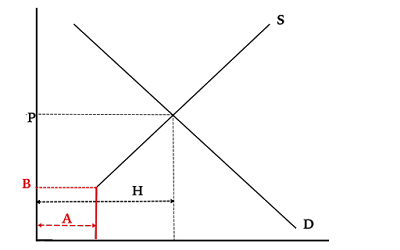 The price, P, has to cover both the cost of all the houses in the H-A segment and the cost of houses in segment A above the price, B, that developers are allowed to charge for those houses.

This is where the market for new homes has settled under the "affordable" housing quota in Denver. It as settled taking into account the apparently lax enforcement of the quota; when the quota is strictly enforced, the following is going to happen to the new-homes market: 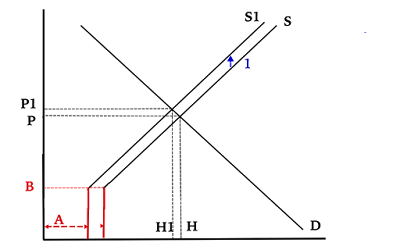 Developers are going to have to charge a higher price per unit in the H-A segment, in other words where homes can be sold to anyone without government-imposed discrimination. This means a cost hike per unit of house, shifting the supply curve upward.

Home buyers, faced with higher market prices, reduce their demand from H to H1. The result is a price hike, though smaller than the initial cost hike: from P to P1.

As a result of the higher price and lower demand, there will be fewer houses built. This, in turn, results in a reduction of supply within the A segment as well, negatively affecting the very population that the regulation is meant to benefit.

Once this dawns on the Denver city council, we can expect them to change the regulation so that it protects the targeted population. This means moving from an "affordable" quota to an affordable amount of homes: 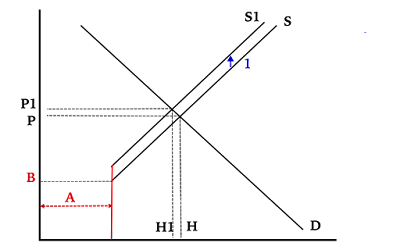 In this case, the free segment of the market for new homes, H1-A, absorbs the entire reduction in demand. This further squeezes the profit margins for developers; depending on the ratio of A to H1 and the difference (P1x(H1-A))-(BxA), they may or may not find some new subdivisions unprofitable.

While the left often derides the idea of profit, the truth is that no business can operate over time without profits. Not even leftists like Elon Musk, Jeff Bezos or Google's Larry Page and Sergey Brin can forfeit profits and still keep their businesses open.

Over time, regardless of how the city of Denver defines its "affordable" homes quota, the outcome will be a reduction of home supply. Even if they change the A quota to be a fixed number for each subdivision, the total number of homes for their targeted population will go down as developers find it increasingly difficult to make money on any new subdivision.

Central economic planning always hurts the people it purports to benefit. The fact that leftists keep pushing for central planning is a testament to whom they really want to benefit: it is not low-income families. It is themselves and their own need for another do-good badge on their sleeves.
at July 21, 2018