According to the Wall Street Journal,*

The Fed is closer than it has been in at least a decade to achieving both of its congressional mandates - to maximize employment and maintain low, stable inflation. Officials seek 2% annual inflation because they view that as consistent with an economy with healthy demand for goods and services. The employment debate is taking on more urgency because joblessness is expected to keep falling due to a burst of stimulus from recent tax cuts and government spending increases. If hiring and workforce participation trends since January continue, unemployment would reach as low as 3.3% by December, way below Fed officials' estimates of the level that is sustainable over the long run.

It is easy to interpret this news as the economy continuing to support our federal government with ample tax revenue for the foreseeable future. Therefore, the risk of a fiscal crisis should be essentially done away with, right?

Not so fast. First of all, the good news from the Federal Reserve is mitigated by analytical factors behind their forecast, factors that will require a separate discussion. Those factors, however, strongly suggest that the Fed is skating on thin ice in its rosy macroeconomic predictions.

Secondly, the Fed may very well rip the rug out from under the feet of its own prediction. As a direct consequence of this outlook, its Board may decide to raise interest rates faster than it otherwise would. If it does so based on the wrong forecast - and the line between right and wrong is thin - it could send our economy off into a recession faster and deeper than would otherwise be the case.

This is where the federal budget comes into play. There is no doubt that the next recession is going to bring hard times to America's governments, forcing everyone from Congress down to city councils to make very tough fiscal decisions - tougher than almost every American politician can imagine today.

In short: this is absolutely not the time for states and local governments to go to the federal government for more money. On the contrary, this is the time to start the work to turn off the fiscal faucet in your state, your county and your school district. Once the next recession hits, Washington will be engulfed in fiscal panic. 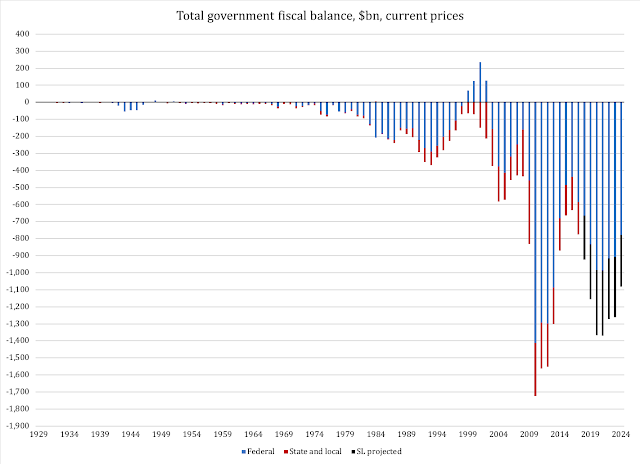 Based on these calculations, next year we will be back to trillion-dollar deficits for the government as a whole. The Office of Management and Budget (OMB) predicts that in 2021 the federal deficit alone will reach $987 billion.

After that, says OMB, the deficit will start shrinking again. That is very unlikely: it is difficult to see what realistic projections would yield the kind of decline in the federal budget deficit that the OMB is predicting. In fact, their forecast of a peak in the deficit just shy of $1 trillion looks downright silly if we examine its details. The OMB foresees that starting in 2020, tax revenue will outgrow spending: 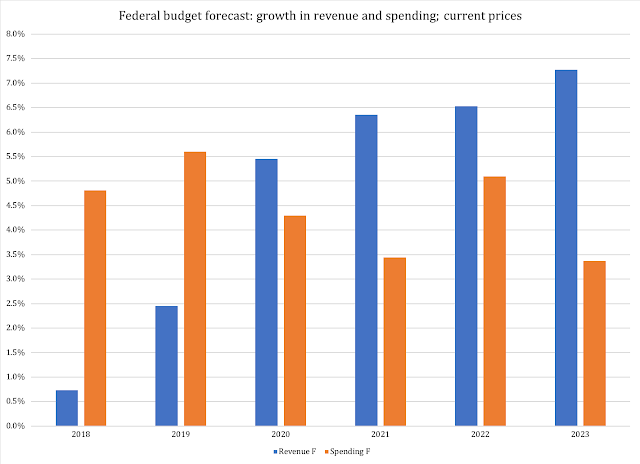 This is not a reasonable forecast. It is far more realistic to suggest that the budget deficit will remain at, or even exceed $1 trillion in the next few years. In fact, it is easy to demonstrate how that could happen.

The first part of the OMB forecast that is unreasonable is the idea that government spending somehow will grow at less than four percent per year. We need only look at the fact that Congress has now done away with all its self-imposed spending limits: the sequester, the debt ceiling and the cost containment board for Medicare. If they intended to keep federal spending in check, why would they institutionally liberate themselves of existing limits on spending growth?

Secondly, in order to produce a revenue stream of the kind OMB predicts, we need GDP growth that goes beyond what is realistically going to materialize in the next several years. Gross Domestic Product at current prices is the best indicator for future tax revenue growth: eighty percent of federal tax revenue comes from personal income, and personal income rises and falls closely with current-price GDP. Therefore, in order to understand what growth assumptions are behind the OMB revenue forecast, we can "reverse engineer" their GDP growth expectations from their projected tax revenue.

It is not entirely easy to do this backward analytical work. One important component is the changing institutional environment of the economy, specifically reforms to our personal income tax code. The past two major reforms, under presidents Reagan and Bush, changed the profile of the federal personal income tax system to concentrate more of the tax burden onto the shoulders of fewer taxpayers. For example, according to the Tax Foundation,

Another way of looking at this is through the lens of Internal Revenue Service income and tax data. Figure 3 explains that most taxpayers are treated leniently by our tax code, while a few are saddled with big tax-paying responsibilities. For example, 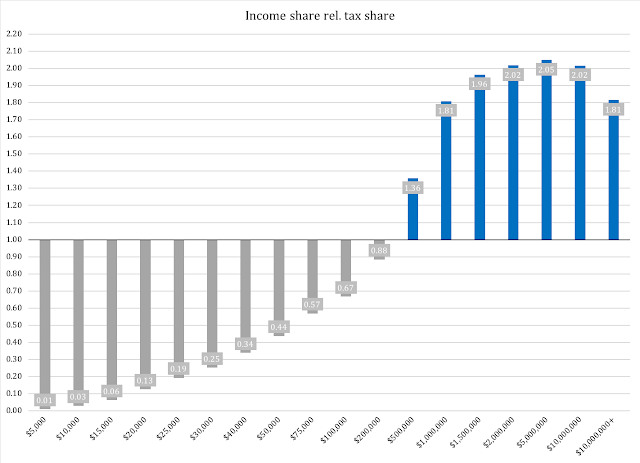 There are two practical messages in Figure 3. First, we have a highly progressive tax system, placing a disproportionate share of the tax revenue responsibility in the hands of a small group of income earners. Those earners, in turn, tend to experience more fluctuations in their incomes than other groups.

Secondly, the progressive profile makes federal tax revenue more volatile than it would be if the tax burden were more closely in tune with people's actual earnings. By relying heavily on higher incomes, the federal government opens its budget to violent revenue swings that can be particularly damaging in an economic downturn. We saw this in the Great Recession, and we will see it even more pronounced in the next slump. The reason for this is that the Trump tax reform further concentrated the personal income tax base to a limited group of high-earning taxpayers: 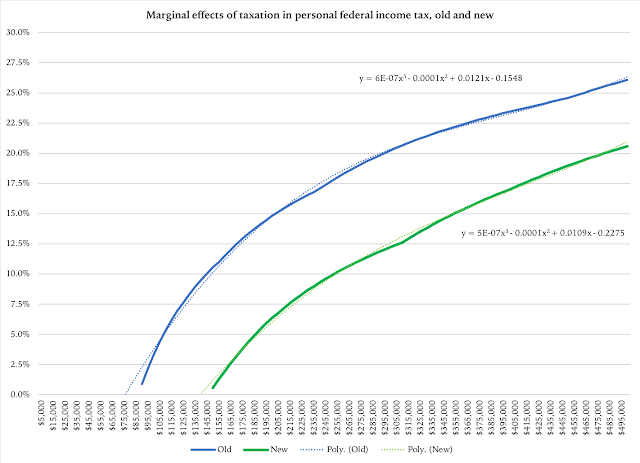 The curve reporting the effective tax rate on a person's income has been pushed to the right. The reason for this is the increase in standard deductions; since the deduction reform was coupled with the same type of income-tax brackets as before the reform (see estimated coefficients in respective equations) the problem with tax-base concentration has de facto been exacerbated. As a result, we can expect sharper swings in federal tax revenue in the future than we have seen recently.

This revenue volatility is no small problem. Figure 4 explains how fluctuations in tax revenue have increased relative fluctuations in GDP since the Reagan reforms went into effect: 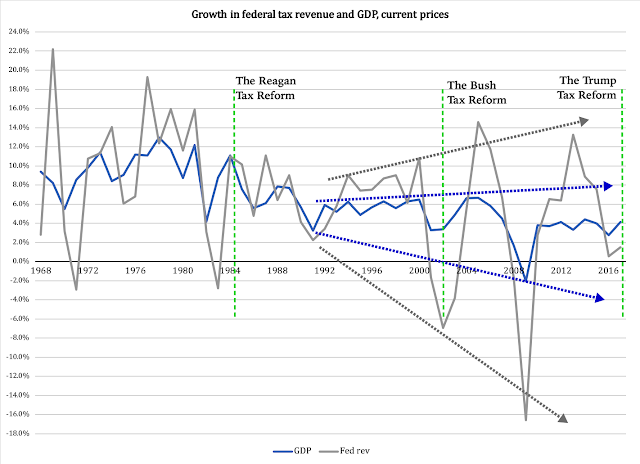 A sharp rise in revenue collection, as predicted by the OMB and illustrated in Figure 2, requires unrealistic increases in GDP growth. Based on the pre-Trump tax system, we need an average current-price GDP growth rate rising toward five percent per year. Assuming two percent inflation - the Federal Reserve target - the forecast of real growth looks as follows:


All other things equal, a real growth rate of 2.5-3 percent is not at all unrealistic. However, in the nasty thing called reality, things never remain equal. The biggest problem with this forecast is that it appears to overstate the growth generated by the Trump tax reform. As I explained yesterday, that reform has done a lot of good for business investments but has yet to generate any noticeable increase in the largest economic absorption variable: private consumption.

In other words, it is realistic to expect growth at lower levels than what the OMB appears to be relying on. This in turn takes us back to the issue of high volatility in tax revenue. As mentioned, after the Trump tax reform, the federal government now relies even more heavily on even fewer taxpayers to fund the federal government. Small variations in GDP will have large repercussions for the collection of tax revenue.

We have not seen a year with 3+ percent real growth in more than a dozen years, and although growth will be relatively strong in 2018, it is unlikely that the U.S. economy will be able to sustain growth higher than 2.5 percent per year in the foreseeable future. As a result, I would revise the OMB forecast about the federal government's tax revenue over the next few years. To see what this means, suppose real growth does not exceed 2.5 percent per year for 2021-2023. Suppose also that we maintain inflation at two percent - a far more realistic assumption than rising GDP growth. All of a sudden, the federal budget deficit will grow over time, not peak and then decline. More damning, it looks like it could permanently exceed $1 trillion:


This scenario does not even take into account a probable recession. Let us return to that scenario in another article. For now, the policy implication for state legislators and governors is clear: this is the time to reduce - not increase - your state's dependency on federal funds. Once Congress is forced into the fiscal-panic corner in the next recession, all federal money to the states will be on the chopping block.

And chopped. The states will be left with the responsibilities to pay for Medicaid, highways, welfare and education out of their own pockets. To start doing that in a deep recession under urgent pressure of rapid-fire spending cuts in Washington, is like trying to build a house on a mudslide.

If our states start today with reforms to get out of dependency on federal funds, they will be ahead of the curve once the fiscal crisis comes roaring into town. Those that act proactively will have time and money to do prudent reforms; those who wait will be in very bad shape.
---
*) Print edition, 6/12/18, p. A10
at June 13, 2018