The State of the U.S. Economy

There has been a lot of talk in media lately about how we are approaching a recession. This growth period, analysts say, is getting long in the tooth. Adding to that are predictions of a stock market adjustment.

A recession would have serious consequences for the federal budget as well as for state budgets across the country. Therefore, it is imperative that everyone with skin in the game stays on top of the macroeconomic trends - especially those running for governor and legislature in this fall's state elections.

Fortunately, I do not believe a recession is imminent. Calendar-wise, yes, we are due for one, because it has been eight years since the recovery began after the Great Recession. The growth periods in the 1980s and 1990s were 7-8 years long, and the one under Bush Jr. about six years. However, this recovery has been the slowest on record, which means that it has not produced supply-side constraints as early as growth periods usually do. This has kept producer-price inflation in check, and allowed an easier expansion on the labor market than we would have seen under normal circumstances.

That does not mean this recovery has been better. The flip side is stagnant wages and unusual difficulties for young workers to establish themselves on the job market. Congress has added ridiculous labor-cost and labor-supply restrictions by insisting on keeping Obamacare. In all, however, the usual business-cycle indicators that would tell us we are ripe for a recession, do not necessarily apply.

On top of that, we just saw a substantial tax reform go into effect. The question, then, is whether or not this tax reform will postpone the next recession or cancel it out altogether.

It is too early to give a definitive answer to this question, but tentatively the conclusion is that the tax reform has only postponed the inevitable, and probably not by more than a year to 18 months.

This means that governors and state legislators are wise to get their fiscal houses in good order in their next session. If they don't, they will find themselves running around in their state budgets trying to put out a fiscal fire when the recession does strike.

Again, that recession will not come this year as it probably would have done otherwise. For now, the Trump tax cuts have infused some new growth stamina into the economy, stamina that will wear off in 2019. In fact, what we are seeing in the latest national accounts data is pretty much along my predictions from last fall, when I explained that:
First-quarter 2018 national accounts data, courtesy of the Bureau of Economic Analysis, suggest that I was correct.

Inflation-adjusted annual growth in GDP in Q1 of 2018 was 2.8 percent, the highest in any quarter in almost three years: in Q2 of 2015 GDP expanded by 3.3 percent. Interestingly, GDP growth trended upward through all of 2017, but the slow acceleration started already in the second half of 2016:


While positive in themselves, these numbers are not very impressive in a broader context. Figure 1 reports annual, inflation-adjusted growth rates, by quarter, since 1955 with a trend line representing a four-year quarterly moving average:* 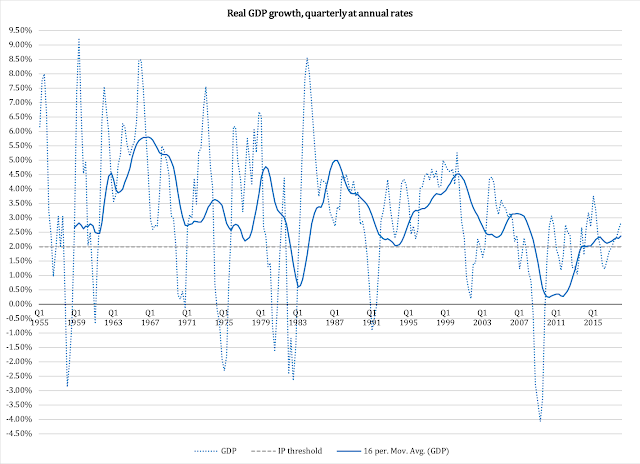 Trend-wise, we have been able to stay above this threshold until the Great Recession hit us ten years ago. The concern is what happens to our economy if we cannot permanently maintain growth rates substantially above two percent. The good news on this front is, again, the upward trend in growth, to which we can add the following numbers for the three domestic absorption variables:
The growth rate in private consumption is actually down somewhat:


The fact that there was no boom in private consumption in Q1 of this year is consistent with the profile of the Trump tax reform. The main cut - and it was a welcome one - was on the corporate side; the reductions that did take place on the personal side were concentrated to lower income taxpayers. Furthermore, with the elimination of deductions for state income taxes many taxpayers did not get much of a cut anyway.

That is not to say consumer spending is in bad shape. The long-term trends remain: steady growth rates somewhere between 2.5 and 3 percent, and a fairly stable distribution between goods and services: 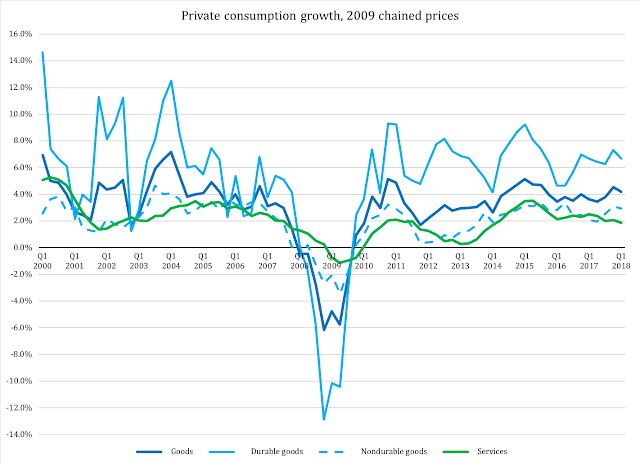 The improvement in the corporate income tax code will undoubtedly have positive effects on household earnings, both in the form of employee earnings (as businesses pass tax cuts on to their workers) and as investments yield more jobs and business activity in the U.S. economy. However, given the comparatively small effect of the tax reform on households, and given that private consumption represents 70 percent of GDP, the long-term impact of better household earnings is likely to be tempered. We will probably see steady growth rather than any new boom.

Figure 3 reinforces the point that the growth we are currently experiencing is driven by capital formation rather than consumption: 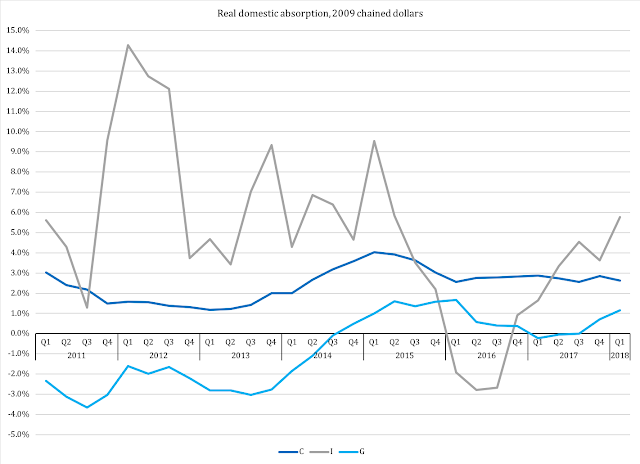 The surge in capital formation - business investments - is impressive, especially in its consistency:


The most impressive part, though, is not the recovery since late 2016, but the slump in investments that preceded the recovery. It is likely the cause of a high corporate income tax, cumulative regulatory over-reach and the excessive costs of Obamacare. while Congress has been pathologically unable to reform away Obamacare, already the election of Donald Trump signaled a turnaround for corporations. The new president's campaign against regulations has conspired with the tax reform to provide relief for businesses and reinvigorate the economy.

We see traces of the tax reform in disaggregated business investments data: 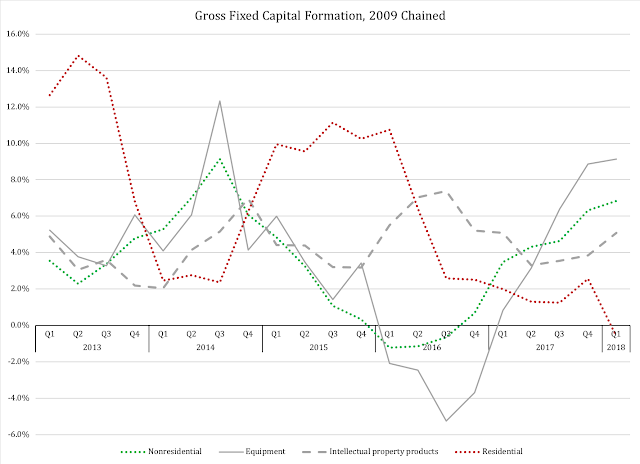 There are two interesting trends here. First, notice the slowdown in residential construction which dips into negative territory in Q1 of 2018. Decelerating home construction is consistent with the trend we saw in private consumption in Figure 2, according to which growth in consumer spending is actually weakening a bit.

Currently, economic growth is not primarily emanating from the household sector.

Secondly, there is a strong increase in non-residential investments, especially in Q1 of 2018. The increase in spending on equipment is consistent with an improvement in optimism in the corporate sector. Since the upward trend in both variables started before the tax reform took shape, the cut in corporate income taxes is only partly responsible. Nevertheless, the first-quarter numbers suggest that we will see substantial growth in fixed capital formation through the rest of this year.

With all this in mind, though, there is the underlying problem of a long-term slowdown in growth. The Trump tax reform has done nothing to change this - it was an energy infusion for a runner who is still facing the same uphill as before - and Congress added insult to injury this past spring when it did away with its own spending restraints. The bigger government grows, and the faster it gets there, the quicker our notorious, chronic budget deficit will add unsustainable debt costs to the federal budget.

Sooner or later - sooner rather than later - our debt is going to blow us right onto the same fiscal-panic rocks that other countries have run into.

The long term slowdown in growth is visible in Figure 1; to highlight the trend further, we can reconfigure the same data as average numbers by presidential term: 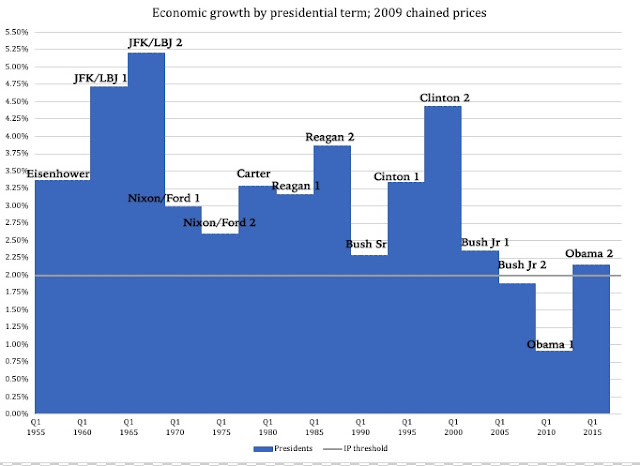 What was normal and expected in the 1960s, namely 3.5-4 percent growth, was the peak of the business cycle in the 1980s and '90s. Today, reaching three percent growth seems as far-fetched as five percent was in the '60s or four percent in the '70s and '80s. Clinton's second term stands out more and more as an anomaly - a good one, but still an anomaly in an otherwise downward trend.

It is entirely possible for us to climb back north of three percent, even reach four percent per year. The way to do it, though, is not by processing more of the economy through government, but by more of Trump's deregulations, but more tax cuts and - most important of all - structural reductions in government spending.

Without anything from the last category, Trump's tax reform will give us a temporary boost without changing the long-term trajectory of the economy. Most important of all: our state governments will still be on track to substantial fiscal problems no later than 2019.