@SpeakerRyan is exactly right. Rebuilding our military is most important issue in ongoing budget negotiations. Nothing else congress does will matter if we fail to provide our men and women in uniform with the resources they need to defend us.

Representative Cheney is a true asset to Congress. She works hard, she is smart, dedicated and a thoughtful politician. She is going to do much good for our country. However, she and Speaker Ryan have genuinely failed to understand what makes a large defense budget possible.

Any attempt to grow the defense budget will hinge on one of two things happening: more tax revenue from the just-passed tax reform, or less spending on entitlements. The tax reform is not going to help, leaving Speaker Ryan and Representative Cheney with entitlement reform as their only option. (It is taken as a given that they will never raise taxes.)

The problem for Speaker Ryan is that he is a welfare statist. Representative Cheney has a similar, but less pronounced problem. She has made it clear that she does not even want to consider entitlement reform until Congress has substantially increased the defense budget:

During the same period of time, the welfare state's share of the budget has climbed from barely a quarter to two thirds (with a small residual being spent on domestic law enforcement, government administration and other items): 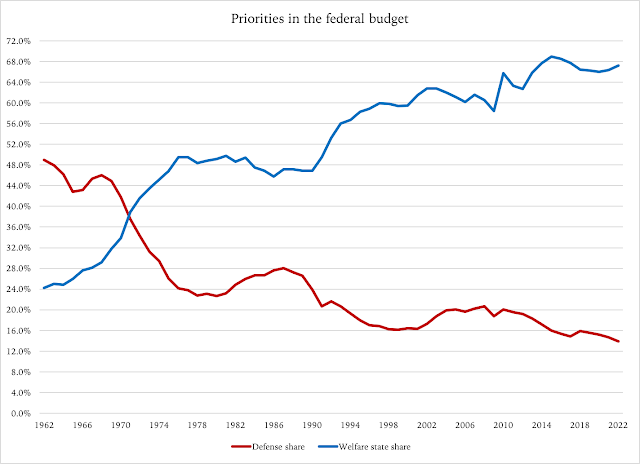 Herein lies the single most important reason why Speaker Ryan and Representative Cheney will be calling in vain for substantial increases in defense spending. They are not ideologically committed to rolling back the welfare state:


Contrary to what they think, Congress cannot leave entitlements unreformed and still have more room for defense spending. As we just saw, two thirds of the federal budget go toward economic redistribution among America's families, while less than one in six dollars that Congress spends go toward national defense. It is naive to think that you can increase the 15 percent of the budget without doing anything about the other 85 percent, most of which, again, is welfare-state spending.

The problem goes even deeper. This is not just a matter of static arithmetic. By their very design, entitlement programs grow at certain rates every year, especially when they are based on the egalitarian principle of economic redistribution. There is a reason why Congress almost always expands entitlement spending more than defense; Figure 2 reports the increase in spending on the welfare state's entitlements, per dollar of increase in defense spending, broken down into five-year annual averages: 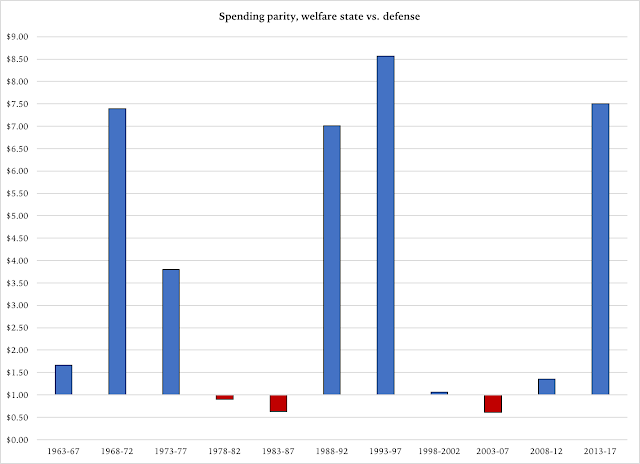 Furthermore, some products provided by government in the form of in-kind entitlements, will come with their own built-in cost drivers. Health care is the best example. Historically, inflation in health care products has been about twice the regular inflation rate, and so for good reasons. Health care is a technologically complicated product, and the education of health professionals is increasingly demanding. Unless Congress is going to starve Medicare and Medicaid enrollees of quality health care, they have to increase spending at a certain rate each year.

The question, of course, is where those extra $300 billion would have come from. Assuming that Speaker Ryan and Representative Cheney do not want to add to the budget deficit, and given the tax reform they just got passed, they are inevitably going to have to re-prioritize existing government spending. They can do that without actually reforming entitlements, but given what I just explained about the spending-growth drivers in entitlements, discretionary cuts will only make a temporary difference.

There is only one way to slow down the growth of entitlement spending, and that is to change the definition of the entitlement. There is, in turn, only one way to change the definition of an entitlement, and that is to fundamentally reform the program. To get an idea of what this means, in my latest book The Rise of Big Government: How Egalitarianism Conquered America I establish the egalitarian roots of the American welfare state. Long story short (you can get the long story in the book...) this means that:

a)  our welfare state is designed to redistribute income and consumption; and therefore
b) entitlement reform means replacing the egalitarian purpose of entitlement programs with a different purpose.

Until Congress decides to put an end to the era of the egalitarian welfare state, the two thirds (and growing) of the federal budget that is welfare-state spending will continue to grow faster than the 15 percent (and shrinking) that is defense spending. In lieu of tax increases (which we hopefully will never see in a Republican-led Congress) there is only one way to grow defense spending: stop the growth in our entitlements.

With the ho-hum tax reform in mind, we cannot expect economic growth to do much of anything to help. It was necessary to prevent a full-scale economic stagnation, but far from enough to help put the economy on a higher growth path. At best, together with Trump's deregulation efforts the tax reform will delay the inevitable entitlement-driven budget crisis. But it will not provide that badly needed extra revenue that Speaker Ryan and Representative Cheney are going to need if they want to grow military spending without so much as touching entitlements.
at January 06, 2018