Egalitarianism at Work in America

In my latest book, The Rise of Big Government: How Egalitarianism Conquered America (Routledge), I show how the American welfare state as we know it today is the offspring of the same ideology that formed the radical Swedish welfare state. In both countries, government is in the welfare-state business not to alleviate poverty, but to redistribute income.

The consequences of this common foundation reach farther than most Americans realize; the answer to the question "When is government big enough?" is a simple "never". In the coming two elections, 2018 and 2020, we will clearly see, and painfully experience, what this means in practice: the completion of the Swedish welfare state in America.

Perhaps the biggest problem is that those who adamantly want to complete the welfare state construct, are not being very careful with what they ask for. As a consequence, they will get it - and more.

In a moment, we will see what that means in practice. First, let us take a look at the theoretical foundation of egalitarianism. It is best summarized in the concept of poverty: under egalitarianism, the welfare state can never eliminate poverty. On the contrary, the more successful the welfare state is, the more difficult it will be to eliminate poverty.

Unlike traditional social conservatism, such as but not limited to its charitable practice within the Catholic church, the egalitarian idea behind the welfare state prohibits the elimination of poverty. While under the social conservative tradition, a man is poor if he lacks the very basic means of life - basic food, shelter, clothes and acute health care - the egalitarian ideology behind our welfare state defines a man as poor when he earns less than some statistical standard.

Typically, our modern poverty concept says that a man is poor if his earnings fall below 60 percent of median income. Based on this definition of poverty, the welfare state then provides a wide range of entitlement programs for the poor, programs the spending of which is determined not by Congress or taxpayers - but by median household income.

Unless our economy falls into a deep depression, this welfare-state construct guarantees annual increases in government spending. In fact, if the welfare state would ever turn out to be the major contributor to growth and prosperity that its proponents suggest, median income would rise dramatically, as would spending on those defined as poor.

In other words, the egalitarian concept of poverty perpetuates a system of economic redistribution, the price of which is a steadily growing burden of taxes on the private sector.

The American welfare state has been growing uninterruptedly since the War on Poverty began in 1964. Its end goal, as formulated by John Kenneth Galbraith in a series of books starting with The Affluent Society in 1958, is a full-scale Swedish welfare state with single-payer health care, universal child care, general income security (including but not limited to paid family leave), a centralized, nationalized school system, a comprehensive, national public-housing program - all on top of the welfare-state programs we already have.

This egalitarian goal is within reach today. A Post-Clinton Democrat party is leaning even further to the left, in part because of the desire among Bernie Sanders supporters to get what they felt that the Clintons denied them in 2016. As part of this radically statist movement, new electoral candidates are popping up with platforms to match their ideas.

A good example is Richard Winfield. With a 35-year long career as a philosophy professor behind him, Winfield is running for the 10th Congressional District in Georgia. Proudly declaring his lifelong commitment to egalitarianism, Winfield explains the principles of his teaching, and how his academic activism is indistinguishable from his political endeavor:

For the last 35 years I’ve taught in the University of Georgia’s Philosophy Department, encouraging countless students to help build an ethical community through their pursuit of the truth. The substantial body of my philosophical writing on politics and society, which includes the books Law in Civil Society, The Just State, and The Just Economy, is another expression of my overriding passion for justice. I am a founding member of the United Campus Workers of Georgia, which is seeking to unionize all employees at UGA, and I have been active in the Athens-Clarke County local Democratic Party for many years.

In his campaign, Winfield further exemplifies the practice of Scandinavian-sourced egalitarianism. His campaign slogan, so to speak, is "A New Social Bill of Rights".

Here is where it gets really interesting. The implication of Winfield's slogan is a Constitutional guarantee of certain "social rights" on the same level of those guaranteed by the first ten amendments fo the Constitution. Regardless of whether or not this is Winfield's intention, he does express a desire to "legislate the policies needed to uphold our freedoms".

The idea of a "second bill of rights" is not new to Winfield's campaign; in recent years, it has mostly dwelled in the shadowlands of the Democratic Socialists of America, though its origin can be traced as far back as to president Franklin Roosevelt. In his 1944 State of the Union speech, Roosevelt explained:


This Republic had its beginning, and grew to its present strength, under the protection of certain inalienable political rights—among them the right of free speech, free press, free worship, trial by jury, freedom from unreasonable searches and seizures. They were our rights to life and liberty. As our Nation has grown in size and stature, however—as our industrial economy expanded—these political rights proved inadequate to assure us equality in the pursuit of happiness. We have come to a clear realization of the fact that true individual freedom cannot exist without economic security and independence. "Necessitous men are not free men." People who are hungry and out of a job are the stuff of which dictatorships are made. In our day these economic truths have become accepted as self-evident. We have accepted, so to speak, a second Bill of Rights under which a new basis of security and prosperity can be established for all regardless of station, race, or creed.

President Roosevelt then went on to list the rights he thought should constitute this "second bill of rights":

As a Congressional electoral candidate, Richard Winfield has taken this Roosevelt's legacy seriously enough to make it the theme of his campaign. Following up on Roosevelt's first economic right, Winfield proposes a jobs guarantee "at a fair wage":

millions of Americans who want to work full time have either no job or part-time employment. They’re not lazy or deficient - the market has failed them by simply not providing full time jobs for everyone who wants one. We can fill this gap by providing jobs at a fair wage to anyone who needs one. We should begin at $20 an hour.

Setting aside obvious questions for now (such as: if the wage level does not matter to someone's employability, why not $30?), if this right is a constitutional one, it becomes the government's duty to provide a job to everyone. That does not mean government would employ the person: the original entitlement as formulated by Roosevelt stipulates a "right" to a job in the private sector. To make sense, therefore, this right would necessitate a government placement program through which every person, regardless of qualifications, could demand a paid job. Government would then have the power to place that person with an employer, with or without the employer's consent. Since the person's wage would come from government, ostensibly the employer would not have any objections.

For example, a man without a college degree could demand to be placed as a philosophy professor at the University of Georgia, and the university would not be allowed to object.

This is not an absurd example. It illustrates how the entitlement idea behind "the right to a useful and remunerative job" works.

The second entitlement on the Roosevelt list has equally unrealistic effects: a person is entitled to a certain level of compensation - in Winfield's case $20 per hour - with no regard to the person's performance. It must be assumed that Professor Winfield and others who support this idea:

a) would continue to do their current work for $20 an hour; and
b) will accept that all students at universities and in high schools and down the K-12 system always receive the same grade.

It is fair to assume that Professor Winfield would do the exact same high-quality job as a professor as he does how, if he has a colleague who is paid the exact same amount but who gets half as good student evaluations. Furthermore, it must be assumed that Professor Winfield is comfortable giving all his students the same grade - say a B - regardless of how they perform on their exams. If they have not demonstrated command of the assigned literature, they are still entitled to a B.

Winfield also wants to make health care, child care, elderly care and paid family leave into unabridged entitlements. I will not expand on paid family leave here - I have written extensively on the subject elsewhere - and the single-payer, child care and elderly care ideas deserve separate discussions.* For now, the question that proponents of these entitlements should contemplate is: how do you guarantee that you can provide sustainable funding over time?

To see what this point means in practice, let us consider Greece. Figure 1 illustrates the increase in social expenditures - tax-paid entitlements - as share of current-price GDP, from 1980: 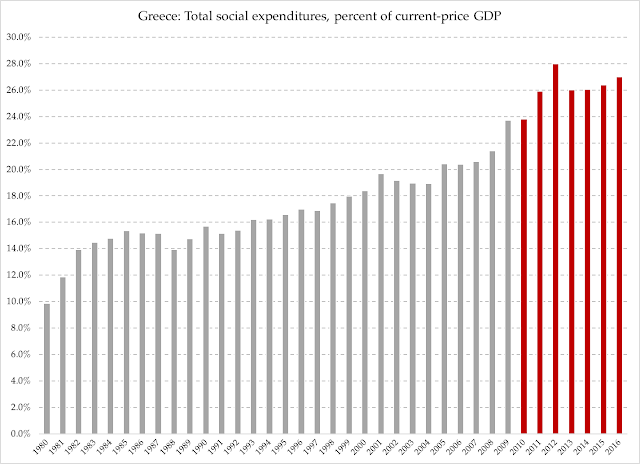 Figure 2 reports the growth in Greece's total government spending and total tax revenue over the same period of time: 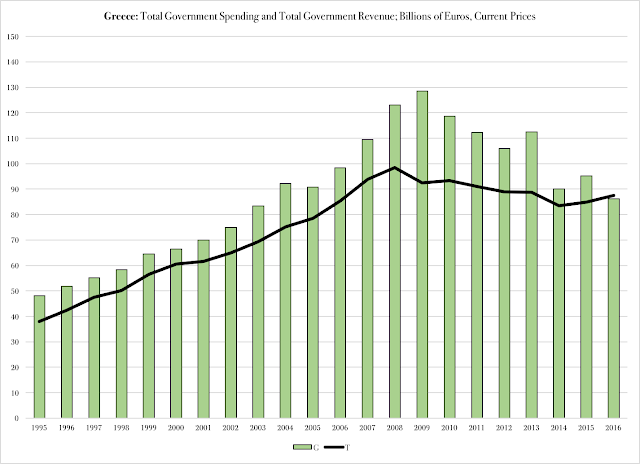 The Greek government could not keep up with the growth in its welfare state. What would American egalitarians do differently to secure funding of their welfare state - again taken into account that U.S. tax revenue, already heavily dependent on corporate earnings and high personal incomes, has a weaker growth record than Greece?

The fiscal collapse of the Greek welfare state hurled the country into an almost decade-long era of very harsh austerity programs. How would American egalitarians avoid putting our country in a similar situation? After all, contrary to conventional wisdom, the U.S. economy is not that far from meeting the conditions that set off a Greek style crisis.

Lack of fiscal and macroeconomic analysis is perhaps the greatest practical problem with egalitarianism. In my book The Rise of Big Government I point to three systemic issues within the realm of macroeconomics and government finances that egalitarians need to address, before they go ahead with their project to complete the welfare state here in the United States. If they ignore these systemic issues, they will most certainly put the U.S. economy on a track into the shadow realm of economic stagnation and industrial poverty where Europe finds itself today.

---
*) However, for those interested in actual experiences with single-payer health care, I will be happy to share what my family members have to put up with in order to even get to see a doctor under the Swedish single-payer system.
at January 14, 2018

Email ThisBlogThis!Share to TwitterShare to FacebookShare to Pinterest
Labels: Greece, Meaning of Socialism, Medicaid for All, The Welfare State