The Trump presidency gave our economy an injection of confidence. The recovery that started in 2011 was overall slow and showed signs already in 2014 of having reached its peak, but was reignited over last winter and stretched out through the summer.

However, the Trump boost can only last for so long. Without substantial reforms to regulations, taxes and government spending, we will not see much more of economic expansion in this business cycle.

Consider, for example, the latest data on private consumption and personal income, as reported in Figure 1. They suggest that the Trump boost has prevented the economy from going into a downturn, but so far that seems to be all: 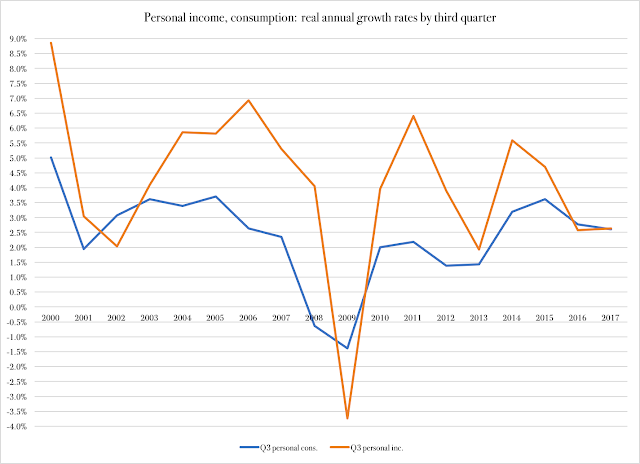 A solid tax reform would have provided us with enough macroeconomic fuel to avoid a recession. That, however, won't happen: the Republican tax reform is not designed to, first and foremost, stimulate growth. Its primary goal is to secure tax revenue, and only secondarily to grow the economy. In its totality, the reform may minimize the next recession and could possibly even help us avoid it (though that is unlikely), but it will not boost GDP growth beyond the 2.5-percent territory where we seem to be stuck, temporary growth spurts notwithstanding.

Another reason why the tax reform is not going to have as much of a growth effect as we would need, is that people's incomes to a lesser extent depend on work-based earnings. As share of total, personal income, compensation of employees dropped markedly during the Great Recession and has remeined low. In the meantime dependency on tax-paid entitlements has increased, apparently on a permanent basis: 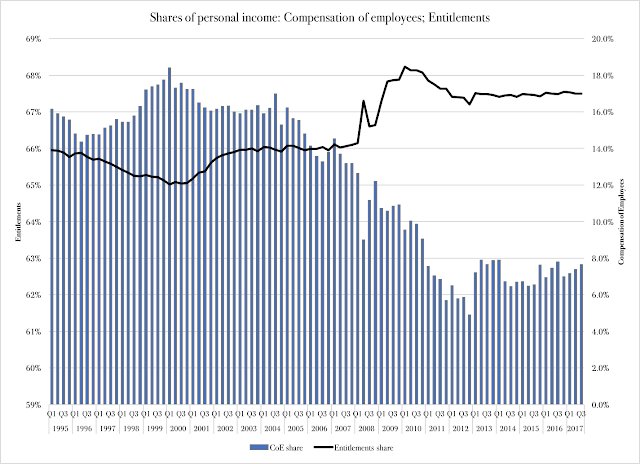 If compensation of employees had been at the same level now, in 2017, as it was in the five years preceding the Great Recession, consumers would have had $686.4 billion more in pre-tax income to spend or save from. It would also have meant that Trump's tax reform would have had a greater impact on household finances.

This is not to say that the tax reform is insignificant or a waste of legislative time and effort. It is better than no reform at all, and definitely better than a reform that would have left the corporate-tax side unchanged. In fact, the cut of the corporate income tax is the best feature of the reform, even if its macroeconomic effects are debatable given other, not-so-welcome elements of the reform. As I explain in my latest AIER article,

On the one hand, the corporate-income tax goes down substantially, which will most likely help business investments. On the other hand, several other features put tax revenue above economic growth. As reported by the Wall Street Journal (December 5, print edition, section A), the Senate version of the tax-reform bill keeps the Alternative Minimum Tax (AMT) for corporations. This, the Journal reports, “gave the senators $40 billion over a decade to use on other priorities.” The AMT goes into effect when a taxpayer deducts “too much” from his regular tax bill. In the Senate version of the tax-reform bill many smaller businesses could end up losing deductions as a direct result of the corporate AMT.

This leaves the growth effect of the bill an open question, a conclusion that applies even more to the individual-tax side. There, I point out,

Since the tax reform does not change taxes on dividends and capital gains, the effects of any tax cuts on work-based incomes quickly vanish as incomes rise. According to IRS income-tax data from 2015: taxpayers making $20,000-$50,000 earn just over 80 percent of their income in the form of wages and salaries; Taxpayers earning more than $1 million earn less than 50 percent of their income from wages and salaries; Only 21 percent of incomes above $5 million is work based.

Figure 2 above reinforces this conclusion: decreasing dependency on work-based income weakens the effects of tax reforms, especially when the distribution profile is such that more low-income households are completely liberated of paying federal income taxes.

To see substantial growth in the wake of a tax reform, we would need to move in the direction of a flat federal tax - or, ideally, its repeal altogether. The latter is impossible so long as we have a welfare state (which we will for the foreseeable future) while the former is within the realm of the imaginable but not realistic in the short term.

In conclusion: the best we can hope for with the tax reform is to sustain growth somewhere at or just below three percent. The most likely scenario, though, is a recession that is milder because of the tax reform, after which we return to the kind of moderate growth rates we have become accustomed to since the Great Recession ended.
at December 10, 2017