Here we go... On the one hand, reports CNBC:

Getting the U.S. economy back to strong growth could require negative interest rates, according to a St. Louis Federal Reserve economist. As many economists dismiss the likelihood of the current record-breaking slump being followed by an equally aggressive recovery, central bank economist Yi Wen said in a paper on the St. Louis Fed’s website that achieving that kind of a rebound is necessary and possible.

On the other hand, they say:

The key, he said, is using aggressive stimulus even beyond what authorities deployed during the financial crisis, and that could include taking interest rates below zero. Wen compared the response to two major U.S. economic downturns: the Great Depression and the financial crisis. He found that the use of aggressive fiscal response through President Franklin Delano Roosevelt’s New Deal helped generate a V-shaped recovery after the Depression, while primarily monetary responses like low interest rates and Fed asset purchases during the financial crisis produced an L-shaped recovery in which GDP failed to reach potential.

In his original paper, economist Yi Wen compares long-term growth rates to actual growth rates in an effort to make the case that America needs more fiscal and monetary stimulus. His argument is concentrated into the following figure: 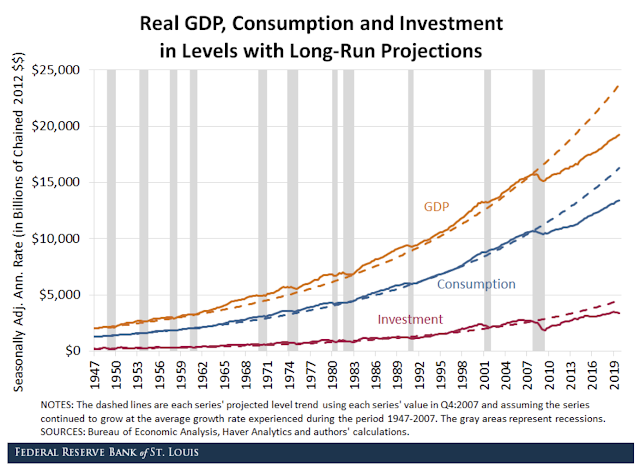 I found that a combination of aggressive fiscal and monetary policies is necessary for the U.S. to achieve a V-shaped recovery in the level of real GDP. Aggressive policy means that the U.S. will need to consider negative interest rates and aggressive government spending, such as spending on infrastructure.

I am surprised every time I see an economist advocate negative interest rates without looking at how sadly ineffective they have been in Japan and, in particular, the euro zone. Especially the European case should be a big red flag for anyone venturing down below zero interest rates.

If someone chooses not to care about empirical evidence, there is still a strong theoretical argument to be made against negative rates. It does not matter if you are a Keynesian or an Austrian - economic theory still does not support negative interest rates. But even if we don't The concept at the center of this debate is the liquidity trap, which I recently explained in a two-part article. Then we have the very purpose behind all that monetary stimulus, namely welfare-state spending that actually hampers growth and makes it even harder for the economy to catch up with its long-term path.

Again, this last point depends on the premise that there actually is a long-term growth path for the economy. That is not the case. Yi Wen, like so many other econometricians, likes to suggest that such a path exists. They need it in order to anchor their model around a rigorous solution in their forecasts. That does not mean there is a long-term growth path - there isn't - but it does not stop econometricians from making that very ontological leap of faith.

Furthermore, mainstream economic theory is built around the idea that there is a long-term general equilibrium. This has to do with price theory and the difference between, on the one hand, new classical macroeconomics and on the other hand heterodox theory. Without delving into that debate here, it is important to note the consequences of the difference:


The case for negative interest rates is based in the orthodox tradition. There, government spending does not weigh down the economy, but actually stimulates growth by means of two transmission mechanisms. The first is the fiscal multiplier, according to which government spending stimulates growth roughly in the same way private consumption does. There is no account for the loss to growth and efficiency in the use of economic resources.

First of all, there is very little evidence, if any at all, that changes in interest rates have any discernible effects on business investments. You can generously explain about a dime of every new dollar in increase in investments by a lower interest rate, but that does not hold for negative rates. The reason is partly the negative rate per se, partly the macroeconomic environment within which negative rates appear.

The only source for new credit will be the one that the central bank provides through the commercial banking system. The Federal Reserve provides banks with cheap credit that they, in turn, can lend to, for example, non-financial corporations for capital formation. The problem is that our banks are already overloaded with marginally performing equity in the form of Treasurys; they don't want more of that. Even if the Federal Reserve gives away money - again the definition of negative interest - the only way banks could make money is by giving away less of it. The margins are simply too slim to make it worth the while.

Our banks already have access to dirt-cheap Federal Reserve funding, and they are lukewarm at best toward it.

And this is all, again, before considering the macroeconomic environment of negative interest rates. More on that in Part 2. For now, let us return briefly to the CNBC article, which quotes Federal Reserve chairman Colin Powell and other Federal Reserve officials as expressing

strong doubts about whether negative interest rates would ever be used in the U.S., as they have in Europe and Japan. They cite little evidence that below-zero yields are effective, and Powell pointed out, in a discussion last week, that they tend to be detrimental to banks. “We don’t think that’s an appropriate tool here in the United States,” Powell told former Fed Vice Chair and now Princeton University economist Alan Blinder. “I would say the evidence on whether it actually works is mixed. There are clearly some negative side effects, as there sometimes are with these things, and it’s just not clear to my colleagues and to me on the Federal Open Market Committee that this is a tool that would be appropriate to deploy here in the United States.”

That is good news, but it is also worth mentioning that the interest rates on Treasurys are below one percent for all except the bonds maturing in ten years (1.32 percent) and 30 years (1.56). They have been so since late March.

However, the Damoclean Sword of negative interest rates is going to continue to hang over our economy so long as Congress refuses to go into fiscal rehab for its deficit addiction.

More on this in Part 2, where we will discuss the macroeconomic environment of negative interest rates.
at June 03, 2020 No comments:

Here we go again... the debate is already starting about tax hikes here in Wyoming.

Continuing to review Western states and their impact from the coronavirus shutdown, today we visit Idaho and Montana.

Here is a quick update on employment numbers for yet another state out here in the West.

We now have the details on how badly Wyoming and Colorado did in the thick of the coronavirus shutdown. It is worth noting that they have both been outperformed by South Dakota.

This is no joke. The private sector cut more than 21,000 jobs in April. This is unlike any jobs loss we have seen. You have to act now to save our state. Watch this and take action: